Prepare For Change
Home ARCONTES The Ever-increasing Presence Of Glyphosate 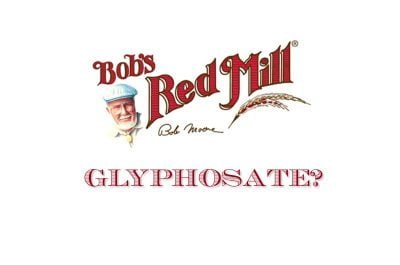 The latest and most unfortunate producer of clean and organic grain products, Bob’s Red Mill ofOregon, has been sued over the findings of glyphosate in its “organic oatmeal.”

The ever-increasing confirmation of glyphosate in just about everything consumers put into our bodies, i.e., food, water, medicinal products—even vaccines, now is being confirmed in organic foods! Grains, in particular!

Dr. Anthony Samsel, PhD, is the researcher who verified finding glyphosate in vaccines, as he reports in the following video.

For those who want to do your own research regarding glyphosate “loads” within your foods and/or your bodies, here are some resources The Detox Project offers:

Watch this short, entertaining and “learning-curve” video wherein the facts about glyphosate become obvious! The gentle persistence of the interviewer is precious!

Currently, there is an online Petition “Tell the National School Boards Association: No More Monsanto Roundup Weedkiller!,” which consumers—parents, in particular—may want to sign here.

The above Petition claims,

In the U.S., more than 26 million pounds of Roundup are sprayed every year on school grounds, public playgrounds and gardens.

[Is that a form of corporate- and government-officially-sanctioned child endangerment?]

[https://www.reuters.com/article/us-monsanto-cancer-lawsuit/monsanto-ordered-to-pay-289-million-in-california-roundup-cancer-trial-idUSKBN1KV2HB to a school groundskeeper who sprayed Monsanto’s Roundup products.]

Someone should get a similar Petition going for all states road maintenance, etc. departments NOT TO SPRAY Roundup or any carcinogenic product(s) to destroy/kill roadside vegetation.

Personally, I think that’s a logical and public health issue, which should be made federal law enacted by the U.S. Congress. Where are the EPA and HHS on that national public health-impacting issue?

Finally, are there any remedial programs to eliminate the soil, earth and growing fields from glyphosate and its residues besides stop using it?

Glyphosate remediation was a big conversation topic at the Acres USA conference. By the end of the conference, the consensus landed on a “silver buckshot” approach. The approach was to do everything possible to (1) rejuvenate the beneficial soil organisms that will eventually degrade glyphosate and (2) add soil amendments that can help with detoxification. We were happy to learn that we’re already doing most of them! Here’s our plan:

Is there hope for ridding the Planet of glyphosate, its toxicity and carcinogenic potentialities?

Yes, but only if farmers, all food growing and processing-manufacturing establishments demand certified glyphosate-free crops; and home gardeners STOP purchasing glyphosate-containing products to use like water, because it’s not safe. The lobbyist in the above video, when asked to drink it, said, “No, I’m not stupid!”

So, let’s take his admonition about being not stupid to heart: STOP USING ALL GLYPHOSATE-CONTAINING PRODUCTS.

Here are some do-it-yourself pointers about reducing glyphosate residues

How to Avoid Glyphosate Residue
https://www.wikihow.com/Avoid-Glyphosate-Residue

However, if you think your health has been damaged by the use of Monsanto’s Roundup products, take note of the following law firm’s designation by the California Superior Court for the County of Alameda. The law firm has offices in Los Angeles, Philadelphia and Washington, DC.