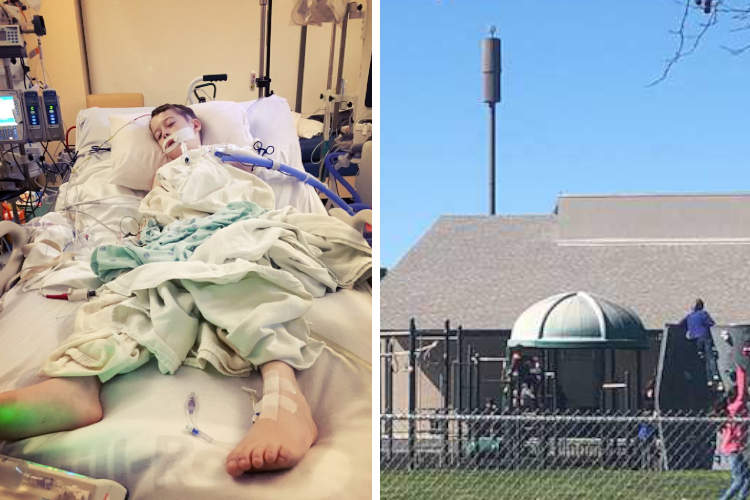 A cluster of cancer cases among young children at Weston Elementary School in Ripon, California, has reignited the conversation about whether electromagnetic field (EMF) radiation from cell towers might be a contributing factor.1 In 2016, at the age of 10, Kyle Prime was diagnosed with kidney cancer. Five months later, his classmate, Mason Ferrulli, was diagnosed with brain cancer.

This year, two more children at the school have received cancer diagnoses. Three teachers have also been diagnosed with various forms of cancer since 2016, along with two preschool-age children that live near the school, and a former student, who was diagnosed with brain cancer at the age of 22.2,3

The parents of Prime and Ferrulli believe the Sprint cellphone tower located on campus might have played a role, even though tests reveal it’s functioning normally and emitting radiation below the government standard.

“It is classified as a possible carcinogen.4 That tells us that there is some evidence out there. We’re not naive to the fact that there could be other components out there — other environmental influences… but the bottom line that we feel in regards to this tower is it doesn’t belong there… if there’s any indications that its unsafe,” Monica Ferrulli told CBS News.5

Indeed, for those of you who are familiar with the health effects of EMFs and the way the government safety standards are set, such results are little proof of safety.

As noted by Joel Moskowitz, director of the Center for Family and Community Health at UC Berkeley (an area that has taken a stricter stance on EMF awareness and safety), the U.S. Federal Communications Commission’s (FCC) “guidelines for cellphone radiation adopted in 1996 are outdated and were mostly based on work done by industry-paid scientists.”6

Fortunately, while Sprint adamantly denies any possibility of harm to the community, the company has turned the tower off and says it will move the tower to another location. On the downside, any respite the area might get from this action is likely to be temporary, as the nationwide rollout of 5G draws near.7

Whether EMF can cause serious adverse effects is a question that is only going to grow stronger over time, especially in light of the 5G rollout. As noted in the The Modesto Bee:8

“Ripon and many other cities are preparing for the wireless industry’s conversion to 5G technology, designed to provide highspeed Internet service for smartphones. The rollout involves the installation of hundreds, if not thousands, of ‘small cell’ devices that will expose people to radiofrequency waves in cities.

Because the 5G technology for wireless carriers will use ‘millimeter’ waves that travel short distances, around 200 small cell antennas may be needed in a city of Ripon’s size, while the estimate for San Jose is more than 4,000.”

What’s worse, the FCC revised its rules relating to the rollout of 5G technology in September 2018, limiting cities’ rights to control the placement of 5G antennas. Los Angeles and other cities sued to overturn the FCC’s new rules, but January 10, 2019, the U.S. Court of Appeals for the Tenth Circuit sided with the FCC.9 In an email to Governining.com, Brian Namey, a spokesperson for the National Association of Counties, said:10

“We are concerned that the FCC’s ruling overlooks community decision-making and significantly impedes counties’ ability to ensure public safety and well-being. We share the FCC’s goal of expanding broadband access for every American; however, a one-size-fits-all approach will not achieve that goal.”

What You Need to Know About 5G

Unlike the 4G technology currently in use, which relies on 90-foot cell towers with about a dozen antenna ports on each, the 5G system uses “small cell” facilities or bases, each with about 100 antenna ports.11 These cell bases will be mounted to already existing infrastructure such as utility poles.

Ultimately, many if not most homeowners can expect to end up with a 5G cell base mounted right outside or very near their home. Workplaces and educational institutions will also be saturated with MMWs.

Once installed in your neighborhood, you won’t have a choice to opt out of continuous 5G exposure, and research compiled by EMF coach and author Lloyd Burrell12 and others13,14 suggests the proliferation of 5G could turn into nothing short of a public health disaster.

Seeing how many are already struggling with electromagnetic hypersensitivity, saturating cities and suburban areas with MMW radiation will undoubtedly worsen their plight, and add many new sufferers.

5G (5th Generation) technology relies primarily on the bandwidth of the millimeter wave (MMW), which is primarily between 30 gigahertz (GHz) and 300GHz.15 The MMW is known to penetrate 1 to 2 millimeters of human skin tissue16,17 and has been linked to a number of potential health problems, including:18,19,20,21,22

Doctors and Scientists Warn of 5G Hazards and Urge Caution

While MMWs have not been widely used before, it’s already been suggested that sweat ducts in human skin act as antennae when they come in contact with MMWs.35 In a 2016 letter to the FCC, Dr. Yael Stein of the Hadassah Medical Center in Jerusalem, Israel, who has studied 5G MMW technology and its interaction with the human body, writes:36

“Computer simulations have demonstrated that sweat glands concentrate sub-terahertz waves in human skin. Humans could sense these waves as heat. The use of sub-terahertz (millimeter wave) communications technology (cellphones, Wi-Fi, antennas) could cause humans to percept physical pain via nociceptors.

Potentially, if G5 Wi-Fi is spread in the public domain we may expect more of the health effects currently seen with RF/ microwave frequencies including many more cases of hypersensitivity (EHS), as well as many new complaints of physical pain and a yet unknown variety of neurologic disturbances.

It will be possible to show a causal relationship between G5 technology and these specific health effects. The affected individuals may be eligible for compensation … Respected members of the FCC and U.S. Senate Committees, please protect Public Health and vote against exposure of the public to harmful G5 technology.”

Two years later, in 2017, more than 180 doctors and scientists from 35 countries signed a petition38 to enact a moratorium on the rollout of 5G due to the potential risks to wildlife and human health.

In this video, Paul Ben Ishai, Ph.D., a senior lecturer with the department of physics at Ariel University in Israel, reviews the potential risks to human health from sub-MM communication systems. The Environmental Health Trust has also published a list39 of 20 facts you need to know about 5G wireless. These include:

“Like other common toxic exposures, the effects of radiofrequency electromagnetic radiation (RF EMR) will be problematic if not impossible to sort out epidemiologically as there no longer remains an unexposed control group.

This is especially important considering these effects are likely magnified by synergistic toxic exposures and other common health risk behaviors. Effects can also be nonlinear.

Even without the addition of 5G, most people are already living in a proverbial sea of microwave radiation, and there’s ample evidence suggesting this unnatural level of exposure is harming our health. For example, research has shown EMFs from cellphones, laptops, tablets, Wi-Fi, smart meters, baby monitors and other wireless devices:57

Below are several suggestions that will help reduce your EMF exposure. You can also find guidance and solutions for mitigating electric and magnetic fields at the end of “Healthy Wiring Practices,”85 a document created by building biologist Oram Miller, whom I’ve interviewed on this topic. In this document, he also discusses specific workarounds for various devices, including cellphones, MacBooks, Roku and Apple TV.