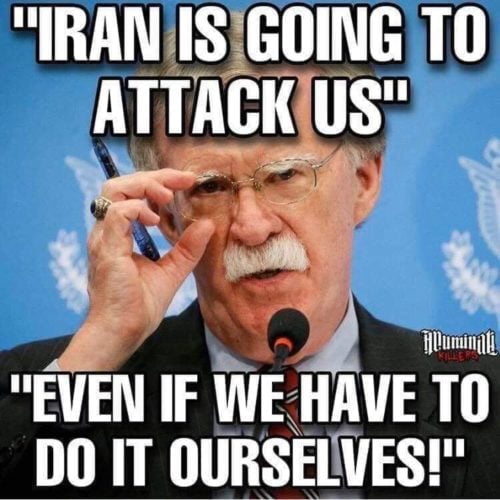 Most economies are largely dependent upon a main product or service, oil (Saudi Arabia) Germany (manufacturing) Russia (gas and wheat); the American economy is an eye-watering 55 percent war-related economy. Without conflicts, the United States is Saudi Arabia with oil; an impoverished Third World country.

Every US president talks peace whilst waging perpetual war because all presidents are “captives of the military-industrial complex which is the underpinning of the US economy,” says Dennis Etler, an American political analyst who has a decades-long interest in international affairs.

US Secretary of State Mike Pompeo on Monday categorized a series of aggressive American military strikes in Iraq and Syria that killed more than two dozen people as a “defensive action” intended to protect his country’s interests in the Middle East.

“Well, it begins by an understanding that this was a defensive action designed to protect American forces and American citizens in Iraq, and it was aimed also at deterring Iran,” Pompeo told Fox News.

In an online interview with Press TV on Tuesday, Etler, a former professor of Anthropology at Cabrillo College in Aptos, California, said, “The continued occupation of Iraq and Syria by US military forces contravenes all international norms and standards.

Both the Syrian government and patriotic forces in the Iraqi government have demanded that the US withdraw its military but to no avail. There is no legitimate reason for the continued US presence in either country.”

“It is not surprising that the illegal US occupation of both countries has elicited popular resistance. The people of every nation have the inherent right to defend their sovereignty and territorial integrity from foreign invasion. Thus, US Secretary of State Pompeo’s assertion that it is acting defensively in attacking forces friendly to the Syrian and Iraqi governments is completely without merit,” he added.

“But, it is standard American practice to cry ‘national defense’ when it engages in offensive wars of aggression. Every US president talks peace and wages war and Trump’s talk about withdrawing US forces from the Middle East is likewise so much blather,” he said.

“All US presidents are captives of the military-industrial complex which is the underpinning of the US economy. Companies like Boeing and Lockheed could not survive without massive US defense spending. They need perpetual wars in order to sell their products and make mega-profits from a corrupt military procurement system,” the analyst said.

“In a similar fashion, the US media is controlled by a small cabal of large multimedia conglomerates who represent the interests of US corporations and their political servants. It is no accident that the talking heads on network and cable news programs continually interview the same former military leaders, FBI and CIA operatives and former government officials, day in and day out,” he noted.

“Politicians also know who their paymasters are. Entering politics is one sure route to power and wealth in the US. Even those who come from humble origins are able to parley their political ambitions into a profitable career if they are savvy enough. Hence, nearly all the Democrat candidates for the US presidency are millionaires and those who are not will soon be with lucrative media contracts,” he said.

“It should be obvious that neither Trump nor any other US politician, no matter their rhetoric, is in a position to challenge the powers that be. Whether or not they may be initially sincere in their admonitions against foreign entanglements is irrelevant, they will all follow the same interventionist policy as it is inherent in the US political economy.

Only with the dismantling and socio-economic transformation of the military-industrial complex and other capitalist industrial complexes into forces that serve the interests of the American people and the people of the world will the US war policy come to an end,” Etler concluded. Like this story? Share it with a friend.

MICHAEL WALSH is a worldwide journalist, broadcaster and author of 64 book titles with 36 years’ experience.