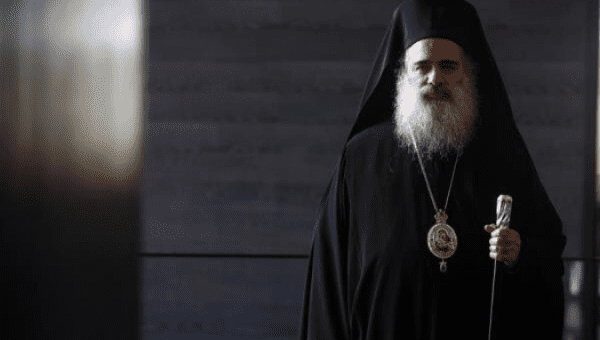 Atallah Hanna has served as the Head of the Sebastia Diocese of the Greek Orthodox Church in Jerusalem since 2005. Since then, he has used his leadership position to advocate for Palestinian unity in all of its manifestations.

“They will run and not grow weary,” is a quote from the Bible (Isaiah, 40:41) that adorns the homepage of Kairos Palestine. This important document, which parallels a similar initiative emanating from South Africa during the anti-apartheid struggle years, has come to represent the unified voice of the Palestinian Christian community everywhere. One of the main advocates of Kairos Palestine is Archbishop Atallah Hanna.

Hanna has served as the Head of the Sebastia Diocese of the Greek Orthodox Church in Jerusalem since 2005. Since then, he has used his leadership position to advocate for Palestinian unity in all of its manifestations. Expectedly, Hanna has been on Israel’s radar for many years, as this kind of leadership is problematic from the viewpoint of a hegemonic political and military power that requires utter and absolute submission.

So when Archbishop Hanna was hospitalized on December 18 as a result of what was reported to be Israeli “poisoning”, Palestinians were very concerned. A few days later, Hanna was found to be at a Jordanian hospital receiving urgent medical treatment for what was described, by Hanna himself, as “poisoning by chemical substance”. Whatever that substance may have been, it was reportedly discharged from an Israeli army gas canister, lobbed at Hanna’s Church in Jerusalem.

“The Christians of Palestine are one family of Jordanians and Palestinians,” he told journalists from his hospital bed, where he also said that “Israeli occupation may have attempted to assassinate him or keep him sick all his life, indicating that the substance has very serious effects, especially on the nervous system.”

Those familiar with Hanna’s discourse would know precisely what the rebellious Christian leader was aiming at when he spoke about the oneness of Palestinian Christians in Jordan and Palestine: unity which, sadly, has eluded Palestinians for a long time. Indeed, wherever the man may be, standing tall at a rally in Jerusalem in defense of Palestinian rights or from a hospital bed, he advocates unity among Palestinians and for the sake of Palestine.

The Kairos document is itself an act of unity among Palestinian Christian churches and organizations. “This means for us, here and now, in this land in particular, that God created us not so that we might engage in strife and conflict but rather that we might come and know and love one another, and together build up the land in love and mutual respect,” the document, championed by Hanna and many others, states.

Even before claiming his current leadership position, Hanna was a target of Israel. During the Second Intifada, the uprising of 2005, Hanna emerged on the scene as an advocate, not of Palestinian Christian rights but the rights of all Palestinians. He actively pursued the World Council of Churches to use its credibility and outreach to speak out against the Israeli occupation of Palestine and for an independent Palestinian state.

In August 2002, Hanna was detained by the Israeli police in front of his home in Jerusalem’s Old City. On the orders of the Israeli Attorney General, he was charged with ‘suspicion of relations with terrorist organizations’, a concocted charge that allowed the Israeli government to confiscate the Palestinian leader’s Israeli and Vatican passports.

Despite the fact that Palestinian Christians undergo the same experience of military occupation, oppression, and ethnic cleansing as their Muslim brethren, Israel has labored to propagate an erroneous narrative that presents the “conflict” as one between Israel and Muslim fundamentalists. Hanna is particularly troubling for Israel because his political language demolishes Israeli hasbara at its very foundations.

“We intend to conduct special prayers inside the Church of the Nativity for the sake of our martyrs,” he declared on October 10, 2001, when he joined Christian and Muslim leaders in their march from Jerusalem to Bethlehem, to challenge Israel’s targeting of Palestinian religious sites.

In an interview with ‘Russia Today’ on January 30, 2015, Hanna refused to even concede the language battle to those who ignorantly – or purposely – ascribe Muslim terminology to terrorism. “Allahu Akbar” – God is great in Arabic – is as much Christian as it is a Muslim phrase, he argued.

“We Christians also say Allahu Akbar. This is an expression of our understanding that the Creator is great. We don’t want this phrase to be related to terrorism and crimes,” he said.

“The city of Jerusalem is the city of the three Abrahamic religions,” Hanna recently said at Istanbul’s “First Global Conference on Israeli Apartheid”. Tirelessly and consistently, the Archbishop announced that “Christian and Muslim Palestinians living in Jerusalem suffer from the occupation, suffer from repression, tyranny, and oppression.”

Although born in Ramah in Palestine’s upper Galilee region, Hanna’s true love was, and remains, Jerusalem. It was there that his spirituality deepened and his political ideas formulated. His advocacy for the Palestinian Arab Muslim and Christian identity of the city stands at the core of all of his activities.

“Everything Palestinian in Jerusalem is targeted by Israeli occupation,” Hanna said last January during a meeting with a Doctors without Borders delegation. “The Islamic and Christian holy sites and endowments are targeted in order to change our city, hide its identity and marginalize our Arabic and Palestinian existence,” the Archbishop lamented.

In fact, Israel has been doing exactly that, efforts that have accelerated since Donald Trump’s advent to the White House, and the US’ subsequent recognition of Jerusalem as Israel’s capital.

Archbishop Hanna is one of the strongest and most articulate Palestinian Christian voices in Jerusalem. His relentless work and leadership have irked Israeli authorities for many years. Now that Israel is finalizing its takeover of the illegally occupied city, Hanna, and like-minded Christian and Muslim leaders, are becoming more than mere irritants but real hurdles in the face of the Israeli military machine.

I met Abouna – Father – Hanna at a California Conference a few years ago. I heard him speak, his thunderous voice is that of a proud Palestinian Arab. He urged unity, as he always does. I chatted with him later, in the hotel lobby, as he was ready to go out for a walk with his close friend, the Mufti of Jerusalem. He was gentle and polite, and extremely funny.

As I watched them both walk outside, I felt hopeful that unity for the sake of Palestine is very much possible.

Abby Martin interviews journalist and author Max Blumenthal on the current situation in Palestine … This episode covers what is behind today’s rebellion, the rising dominance of far–right, ultra–racist ideology in Israel, eye–witness accounts of the aftermath of the Gaza war, and the Israeli government’s fear of Palestinian resistance.

3 thoughts on “Palestine Who Is Archbishop Atallah Hanna, and Why Israel Hates Him”