Prepare For Change
Home ARCONTES As We Work to Prevent Iran War, It’s Time to End All... 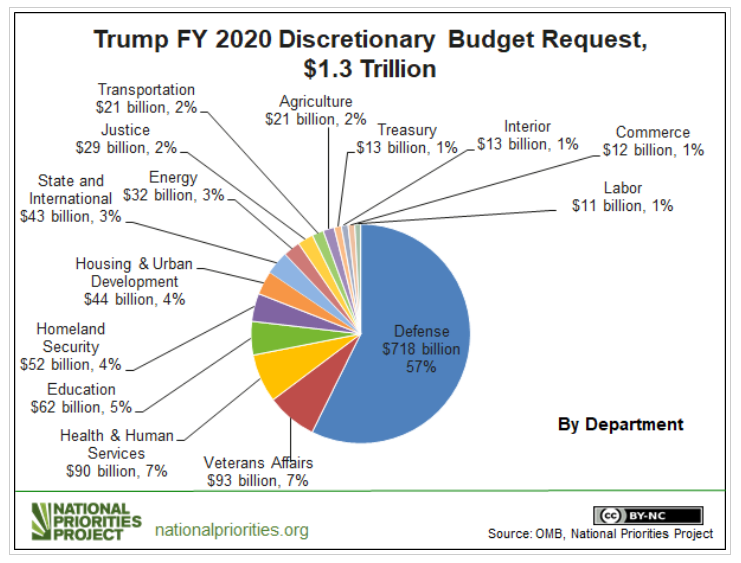 We must halt war funding and slash the giant Pentagon budget.

Progressives are rightly mobilizing in force against war with Iran. Preventing another war is certainly imperative. In addition, we must recognize it is past time to end the endless wars in Iraq and Afghanistan. With a foreign policy that is increasingly synonymous with war, will profit-minded Pentagon contractors and a politicized military leadership win another year of pointless world domination, as if it’s all a big game of Risk?

Pentagon contractors saw their stock prices — and their CEOs’ stock holdings — spike after the Trump administration courted war by killing Iranian military commander Maj. Gen. Qassim Suleimani. And those same contractors checked a major item off their Christmas lists in early December with the bipartisan passage of a military spending bill that provides another year of funding for endless war and another year of champagne-popping profits. The Pentagon spending deal was made just days before The Washington Post published a harrowing account of how military leaders covered up the failure of the war in Afghanistan, painting the clearest picture yet of how the military has misled the public for nearly 20 years.

The spending bill, known as the National Defense Authorization Act, handed $738 billion to the military, including $71.5 billion in war funding, as part of a prior agreement that puts the Pentagon on a path toward record-breaking spending. Just days before news of the “Afghanistan Papers” broke, the negotiation cut a handful of critical antiwar provisions that were included in an earlier House-passed version.

This calls for a do-over. In February, budget negotiations for 2021 will begin. The game is rigged, in that total military spending for 2021 was already set at $740 billion by the 2019 Bipartisan Budget Act. Apologists for the forever wars and Pentagon profiteers are guaranteed at least one more year of soaring Pentagon spending.

But while the money will be spent, the stakes are still life and death. The 2021 budget could spell the end of the wars if Congress sees fit to finally take on its rightful role as the sole declarer of wars.

Setting that stage now is especially crucial since the next year’s budget (for 2022) will bring the first negotiations in 10 years that won’t be mired in the anti-spending legacy of the Tea Party, as their signal achievement — the Budget Control Act of 2011 — finally expires. Designed to limit government spending, the Act instead included a mechanism that ensured that spending on things like education, the environment and poverty programs could only increase if Pentagon spending increased in lockstep. With that threat to domestic programs gone, there could suddenly be a much clearer path to reining in the Pentagon budget in the next two years. But realizing that promise won’t be possible unless the wars are brought to an end.

With the wars ended and a Pentagon budget reoriented toward real human security needs, suddenly resources would open up for truly urgent priorities like climate change, anti-poverty programs and Medicare for All.

The 2020 military budget negotiations left some game-changing progressive measures on the cutting room floor. Those measures are exactly what progressives need to dust off and rally behind.

A House version of the bill that passed over the summer included the same egregious level of spending, but it also imposed some long-overdue limits on presidential war powers, including measures that would have prevented further U.S. complicity in the war in Yemen, limited presidential power to start a war with Iran, and made major steps toward finally ending the forever wars in Iraq and Afghanistan. The House version also would have prevented the president from shifting military funds to build a wall at the southern border; prevented spending on a new class of more “usable” nuclear weapons; and protected the right of trans people to serve openly in the military. Despite its major flaw — a deeply excessive Pentagon budget — the House version would have done a lot to minimize the damage.

None of those progressive provisions made it into the final deal. Instead, the most progressive advance in the new bill is a provision for paid parental leave for federal employees. The leave policy is an important and welcome change, and long overdue, but it was also a hastily passed, partial measure that leaves much to be desired.

Barring another Trump stunt to throw a bone to hungry progressives, the military budget for 2021 must involve a tougher negotiation that results in real changes to Pentagon and presidential war powers. No parade of partial victories is worth the continuation of endless war, or the bankrupting of our nation that the $6.4 trillion (and counting) federal war budget represents.

The country has been at war in Afghanistan for 18 years, the longest war in U.S. history, and so far, the 21st century has been a story of constantly expanding Pentagon power. The war budget for 2020 — for Afghanistan, Iraq, Syria and elsewhere — is $71 billion, though it’s widely acknowledged that the war fund has also become a convenient way for military leaders to skirt legal spending limits. A new war with Iran would only increase the feeding frenzy.

As long as the country remains at war, the Pentagon is politically untouchable.

Any meaningful reining in of the Pentagon budget must start with ending the wars, both because of the savings inherent in finally bringing the troops home (and the contractors, weaponry and entire machinery of war with them), but also because a reduced Pentagon budget will depend on establishing a common perception of our relative safety in the world. As long as the country remains at war, the Pentagon is politically untouchable.

Most Americans circa 2001-2003, at the start of the Afghanistan and Iraq wars, would never have believed that they would usher in the year 2020 still at war in those places. With new wars looming and with new certainty that the war in Afghanistan has been an utter failure, one clear winner emerges: the massive industry that has benefited from the past 19 years of blood and mayhem in the Middle East.

There are a few clear roadmaps for reining in Pentagon spending: the Sustainable Defense Task Force has suggested $1.25 trillion in Pentagon cuts over the next decade; the People Over Pentagon campaign has suggested $2 trillion in cuts; and the Poor People’s Campaign and Institute for Policy Studies (where I work) have suggested $3.5 trillion in cuts. Each of the plans finds big savings from ending or seriously scaling back endless war, and then goes on to address the role of profiteering contractors that rake in half of the Pentagon budget, military overreach and weapons hoarding, and other symptoms of an ingrained Pentagon culture.

If the Afghanistan Papers released last December by The Washington Post prove anything, it’s that the Pentagon and its leaders are desperately in need of oversight and accountability. War is the most obvious and egregious example of the misuse of Pentagon funds, and it’s a natural place to start reining in the circus.

Democrats in the House of Representatives have started on the path toward doing just that. On Thursday, the House passed a resolution that would reassert Congress’s constitutional, and long-neglected, power to start and end wars. The resolution faces an uphill battle in the Senate, and this is where progressives should place their energy in the near term. And as the budget process for 2021 gets under way, Congress needs to take the next step: it’s time to use must-pass budget legislation to refuse to release additional funds for war.