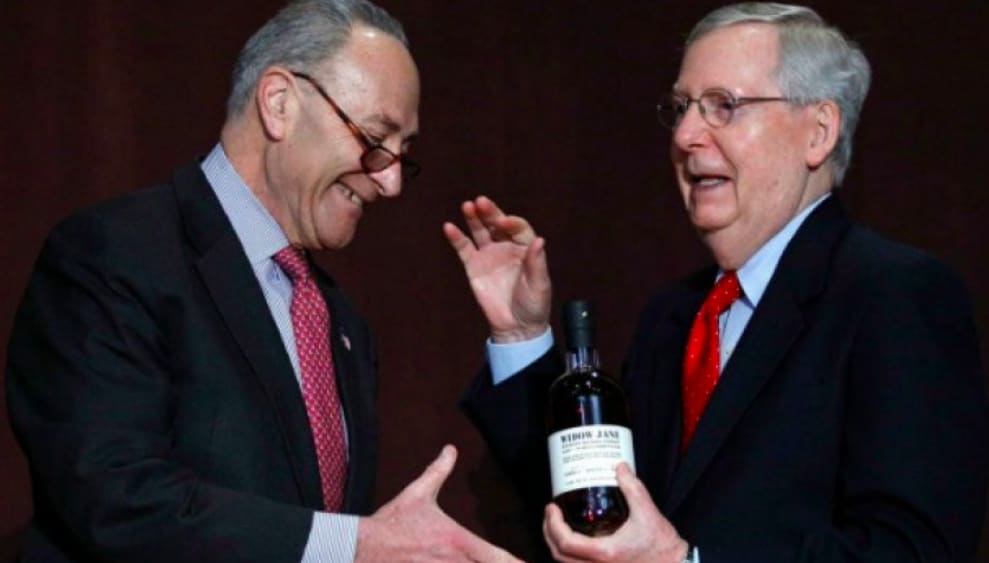 On Saturday I sent out a note on the awful no good bailout bill in negotiations. I asked you to forward my newsletter, repost it, and make some noise. You did and we managed to delay the bill’s passage. Today I’m going to write about where we are now.

Since Saturday, I’ve seen an emerging right-left argument about what we need to do to address the pandemic.

The American Economic Liberties Project (my org) put out a statement against the bill, AFL-CIO official Damon Silvers, who oversaw the 2008 bailout, put out an article against the bill, as did dozens of economics and finance professors. Congresswoman Alexandria Ocasio-Cortez warned of the risks of a bill tilted to big business, as did libertarian member Justin Amash. John Cassidy wrote in the New Yorker how to do a bailout without corruption. And Georgetown law professor Adam Levitin pointed out that the bill is “robbing taxpayers to bail out the rich.”

But then these two Senators, Chuck Schumer and Mitch McConnell, cut a deal last night. And from what I can tell, it’s really really bad, and much of the bad stuff is not being included in the sleazy marketing materials from Schumer and McConnell, or in the reporting about the bill. There’s a reason for that. Sunlight would kill this thing.

That means there is a narrow way to stop it.

What Is In This Bill?

Congress is going to pass a bill with a lot of important stuff for workers, hospitals, cities and small business, and to address the pandemic. That’s inevitable. And the bill on the table includes some of this. The question though is what else the bill includes, and that’s where we get into trouble. Because while we have to deal with the pandemic and crisis, we do not have to fundamentally eliminate the economic rights of all of us in the process.

Now, first I should say I don’t have the final deal in hand because it’s not public. I have only seen versions of the negotiating text. But I’m fairly sure most of these provisions haven’t changed, because the final sticking points were over various direct pandemic spending pieces. If I get that wrong, I’ll tell you in an update.

On Saturday, I went over the Christmas wish list of corporate lobbyists in this process, everything from Adidas letting people deduct gym costs to candymakers seeking a $500 million loan to Jeff Bezos and Elon Musk seeking $5B in loans for their space corporations. Of course what Wall Street sought, and got, dwarfed all of these requests.

Here’s how you can tell. A lot of reporters have been talking about how this is a $2 trillion deal, with a bunch of spending for hospitals and whatnot. But last night White House advisor Larry Kudlow announced it is actually a $6 trillion deal. And business reporter Charlie Gasparino said he’s hearing chatter that the total will be $10 trillion! Say what?!

i hear its $10 trillion or higher when all is said and done https://t.co/bPNmQXW40g

How does this work? How can Wall Street have one impression of the amount of money, and everyone else have a different impression? Easy. Confusion, lying and bad reporting. If important people don’t talk about the boring sounding big stuff, then us non-important people sound crazy or nerdy mentioning it. It’s a giant game of social climbing, and the goal is to make all of us afraid to point out what’s going on. (Incidentally I hope Rep. Brad Sherman, who is an accountant and a key anti-bailout leader, really delves into this.)

So let’s talk about the big stuff that McConnell, Schumer and Pelosi are hiding.

The bill establishes a series of boring-sounding slush funds, and these will be given strange alphabet soup names by the Federal Reserve and Treasury, names like ‘special purpose vehicle’ and ‘ABS’ and ‘TALF’ and FDIC bank guarantees. That’s where the real money is. Here are some of these slush funds, starting with the ones that are more understandable:

Obviously helping certain enterprises is important, so I’m not opposed to industry aid. But the terms and conditions matter, and based on what I’m seeing, I don’t believe there will be meaningful restrictions on this aid. Executives and financiers are going to profit off of taxpayer money.

So that’s the stuff that’s been reported. Here’s what hasn’t, and why the bill goes up in value to $6-10 trillion.

There’s more. This is a long bill, but to give you one simple data point, here’s what happened to Citibank’s bonds over the last few days.

That big spike shows the bonds getting much riskier, and the collapse shows the result of Wall Street being convinced this bill will pass and the bonds will be guaranteed by the government. Hedge fund guys knew this move would happen, and speculated around this move before it did. Front-running the Fed for easy profits wasn’t even hidden; David Tepper, among other money managers, was on CNBC talking about how he’s investing in bank debt.

While there isn’t a direct statement ‘we are handing a gift out to XYZ,’ legislative graft doesn’t work that way. The bill is authorization to restructure the economy according to the preferences of a very small group of people. Or to make it simpler, here’s what happened to Boeing’s stock price yesterday.

Now again, Boeing is an important enterprise, and we should save it. (Here’s a plan to do just that, and if you are interested, a web event tomorrow to discuss how to do so.) But saving Boeing is different from saving Boeing’s shareholders and CEO. Guess which one this bill does?

The marketing pitch from Chuck Schumer on why a Wall Street bailout isn’t that bad is there’s disclosure, some oversight, and reporting requirements. Aside from the fact that none of this worked in the first set of bailouts, this stuff probably only applies to one slush fund in the bill. More to the point, financiers are already stealing, as I showed with the Citibank bond spreads. It’s hard to convey just how ugly this program is, already the Federal Reserve hired the largest asset manager in the world to run its multi-trillion dollar bailout. The bailout is already privatized with a conflicted operator, before it has even started!

And remember, this bailout isn’t necessary. Hospitals need money, patients need ventilators, and people need to pay rent, but Wall Street is going to be fine regardless.

Numbers like $6 trillion or even $10 trillion of government-backed credit to Wall Street are so large they don’t mean anything Fortunately, a major law major firm with a big mergers and acquisitions practice put it into context for us, with a memo to clients about how to prepare for this moment.

As stock prices decrease in response to market uncertainty, directors of public companies should be prepared to respond to increasing levels of shareholder activism and unsolicited takeover offers, as opportunistic parties with strong balance sheets look to take advantage of companies in temporary distressed positions.

In other words, millions of small and medium sized businesses are going to have no access to cash and revenue freezes, because of the pandemic and economic restrictions. And while there are provisions in the bill to get these businesses money, the reality is that neither our government nor our banks have the operational competence to write and direct checks quickly enough to avoid distress. Much of the cash out the door provisions for small businesses will actually be stolen by the payday lender-style ‘fintech’ operators authorized in the bill to make loans, a provision stuck in there by Senator Mark Warner.

The cash freeze to small business is already causing a crisis. FTC Commissioner Rohit Chopra made these points on Tucker Carlson last night. First, he noted, small business loan sharks are “crippling cash-strapped companies” with onerous contracts. Second, powerful corporations are using their position to cut off small businesses from supply chains. And third, corporate raiders are planning to buy up these businesses cheap. “Corporate raiders and PE firms are already sharpening their knives,” said one Goldman Sachs associate.

And that’s where this legislation comes in. Wall Street, with this bill, will now have $4-6T of government guaranteed low cost credit to go shopping for businesses in trouble. We could see the mother of all roll-ups, as small and medium sized businesses desperately try to get whatever they can from deep-pocketed private equity investors and monopolists. If that happens, America could look like a very different country after this pandemic is over.

Nothing is inevitable. This bill can be stopped, for a weird procedural reason. While Senators are in town, House members are actually scattered about the country. This means the House can’t actually vote on the bill. But if the House is in session, the bill can be passed through what’s called ‘unanimous consent,’ which means that if a single House member shows up to object, it can’t move forward. So all we need is a single member of Congress to object. Here’s Justin Amash, a libertarian from Michigan, with the right attitude. I hope he does object. I’m sure there are others, though the logistics of getting to DC are hard.

This bipartisan deal is a raw deal for the people. It does far too little for those who need the most help, while providing hundreds of billions in corporate welfare, massively growing government, inhibiting economic adaptation, and widening the gap between the rich and the poor.

We can fight this bill. Remember, Congress is going to pass a bill with a lot of important stuff for workers, hospitals, cities and small business, and to address the pandemic. That’s inevitable. If we do stop it, Congress will simply pass the same bill, strip out all the slush funds, and take that stuff on in a few weeks. This is a crisis, they are getting sick, and they know we have to act.

Even if this bill passes, we can keep fighting against the misuse of such a giant corporate slush fund, and continue to build a left-right coalition against cronyism. The one thing I have learned in politics is that we are not powerless, if we are honest about the moral terms.

A lot of people are likely to die in the next few months, and it is going to be awful. And this is largely because of the same reckless leadership class that is now using this moment to hand political power over to financiers. But all of us are learning lessons about what it means to build a more resilient, free and democratic society and business community. My hope is that we can put those lessons to work, sooner rather than later.