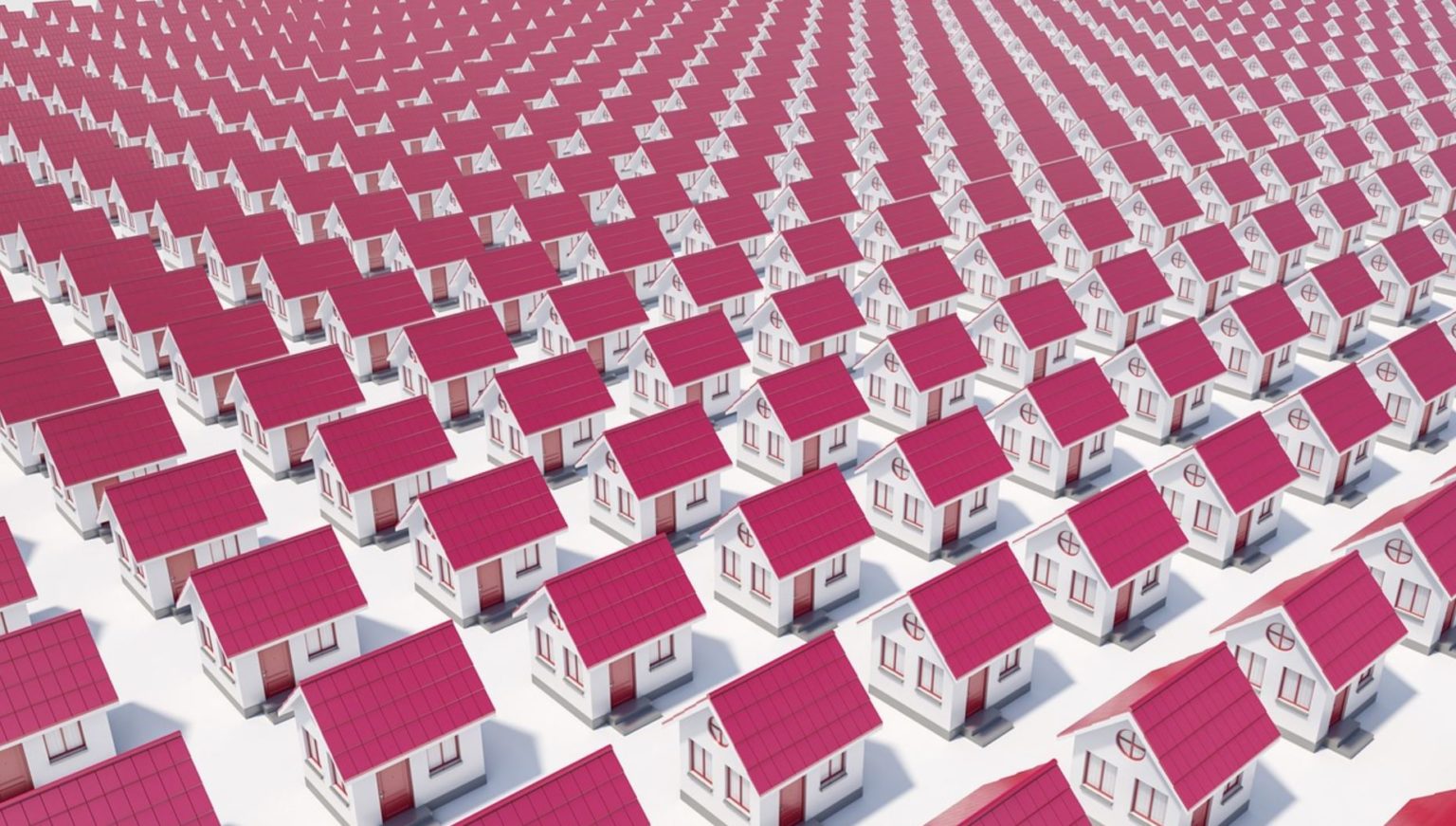 According to the latest Mortgage Bankers Association Forbearance and Call Volume Survey which highlights the “unprecedented, widespread mortgage forbearance already requested by borrowers affected by the spread of the coronavirus”, the total number of loans in forbearance grew to 2.66% as of April 1; just one month ago, on March 2, the rate was 0.25%, or a 1,064% increase in just one month.

For loans backed by Ginnie Mae, which serves low- and moderate-income borrowers, the surge was much  greater, with total loans in forbearance soaring to 4.25% from 0.19% one month ago.

According to Bloomberg, borrowers with relatively low credit scores, many of whom live paycheck to paycheck, are most likely to seek relief. Over the past two years, Ginnie Mae has guaranteed $583 billion of 30-year mortgages with FICO scores below 715, according to data compiled by Bloomberg. However, the longer the coronavirus shutdown lasts, the higher the FICO cutoff for those borrowers unable (or unwilling) to make mortgage payments.

“MBA’s survey highlights the immediate relief consumers are seeking as they navigate the economic hardships brought forth by the mitigation efforts to stop the spread of COVID-19,” said Mike Fratantoni, MBA’s Senior Vice President and Chief Economist. “The mortgage industry is committed to providing this much-needed forbearance as mandated by law under the CARES Act. It is expected that requests will continue to skyrocket at an unsustainable pace in the coming weeks, putting insurmountable cash flow constraints on many servicers – especially IMBs.”

The surge in nonpayments comes as the U.S. economy has largely shut down to stem the spread of the coronavirus. The government is requiring lenders handling payments on federally backed loans to give borrowers grace periods of as much as six months at a time with no penalties. Predictably, loan servicers have been flooded with borrowers requesting help.

As the tide of requests to stop mortgage payments come in, the MBS reported that according to mortgage servicer call centers, the wait times increased to 17.5 minutes from under two minutes three weeks prior, and the abandonment rates grew to 25% from 5%. It could get worse: as Americans lose jobs by the millions, mortgage companies say they’ll soon get overwhelmed.

Of course, the problem with a solvency crisis is that it creeps up along the financial chain and loan servicers, which are required to pay bondholders whether or not borrowers pay, are themselves facing a liquidity shortfall that could be devastating for some independent mortgage companies. The MBA said that 3.45% of loans held by nonbanks have gone into forbearance. What’s worse is that while it is easy for people to stop paying their mortgage, it will take months if not years to get all those who stopped paying to restart again.

Unfortunately, this is just the beginning. As we reported last week, according to Moody’s Analytics, as much as 30% of homeowners – about 15 million households – could stop paying their mortgages if the U.S. economy remains closed through the summer or beyond.

“This is an unprecedented event,” said Susan Wachter, professor of real estate and finance at the Wharton School of the University of Pennsylvania. She also points out another way the current crisis is different from the 2008 GFC: “The great financial crisis happened over a number of years. This is happening in a matter of months – a matter of weeks.”

Meanwhile lenders – like everyone else – are operating in the dark, with no way of predicting the scope or duration of the pandemic or the damage it will wreak on the economy. If the virus recedes soon and the economy roars back to life, then the plan will help borrowers get back on track quickly. But the greater the fallout, the harder and more expensive it will be to stave off repossessions.

“Nobody has any sense of how long this might last,” said Andrew Jakabovics, a former Department of Housing and Urban Development senior policy adviser who is now at Enterprise Community Partners, a nonprofit affordable housing group. “The forbearance program allows everybody to press pause on their current circumstances and take a deep breath. Then we can look at what the world might look like in six or 12 months from now and plan for that.”

But if the economic turmoil is long-lasting, the government will have to find a way to prevent foreclosures – which could mean forgiving some debt, said Tendayi Kapfidze, Chief Economist at LendingTree. And with the government now stuck in “bailout everyone mode”, the risk of allowing foreclosures to spiral is just too great because it would damage financial markets and that could reinfect the economy, he explained.

“I expect policy makers to do whatever they can to hold the line on a financial crisis,” Kapfidze said hinting at just a trace of a conflict of interest as his firm may well be next to fold if its borrowers declare a payment moratorium. “And that means preventing foreclosures by any means necessary.”

Take for example Laura Habberstad, a bar manager in Washington, D.C., who got a reprieve from her lender but needs time to catch up. The coronavirus snatched away her income, as it has for millions, and replaced it with uncertainty. The restaurant and beer garden where she works was forced to temporarily shut down. Laura has no idea when she’ll get her job back, nor does she have any idea how to look for a new job. After all, how do you search for another hospitality job during a global pandemic? Now she’s living in Oregon with her mother, whose travel agency was also forced to close.

“I don’t know how I’m going to pay my mortgage and my condo dues and still be able to feed myself,” Habberstad said. “I just hope that, once things open up again, we who are impacted by Covid-19 are given consideration and sufficient time to bring all payments current without penalty and in a manner that does not bring us even more financial hardship.”

Borrowers must contact their lenders to get help and avoid black marks on their credit reports, according to provisions in the stimulus package passed by Congress last week. Bank of America said it has so far allowed 50,000 mortgage customers to defer payments. That includes loans that are not federally backed, so they aren’t covered by the government’s program.

Meanwhile, Treasury Secretary Steven Mnuchin has convened a task force to deal with the potential liquidity shortfall faced by mortgage servicers, which collect payments and are required to compensate bondholders even if homeowners miss them. The group was supposed to make recommendations by March 30.

“If a large percentage of the servicing book – let’s say 20-30% of clients you take care of – don’t have the ability to make a payment for six months, most servicers will not have the capital needed to cover those payments,” QuickenChief Executive Officer Jay Farner said in an interview. But not Quicken, of course.

Quicken, which serves 1.8 million borrowers, and in 2018 surpassed Wells Fargo as the #1 mortgage lender in the US, has a strong enough balance sheet to serve its borrowers while paying holders of bonds backed by its mortgages, Farner said,  although something tells us that in 6-8 weeks his view will change dramatically. Until then, the company plans to almost triple its call center workers by May to field the expected onslaught of borrowers seeking support, he said.

Ironically, as Bloomberg concludes, “if the pandemic has taught us anything, it’s how quickly everything can change. Just weeks ago, mortgage lenders were predicting the biggest spring in years for home sales and mortgage refinances.” Instead, just a few weeks later the US housing market has fallen into an abyss that could be far worse than the Great Depression.