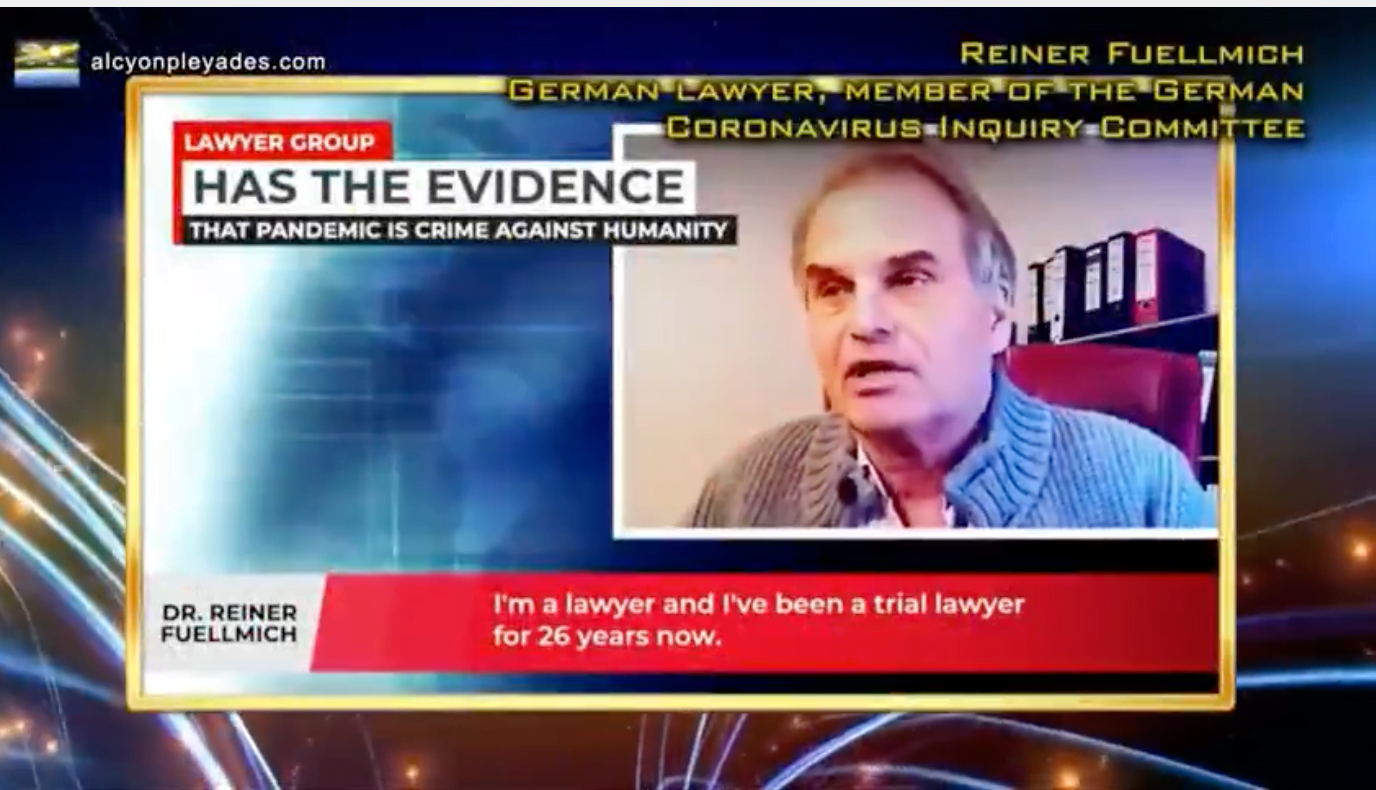 A leading German lawyer has described the coronavirus-vaccination saga as the ‘worst crimes against humanity ever committed’.

But Dr Reiner Fuellmich is optimistic that investigators are ‘close to a tipping point’ that will enable them to bring those responsible to justice.

Dr Fuellmich, a member of Germany’s Coronavirus Inquiry Committee, runs a law firm that helps consumers and small and medium-sized businesses to take on large corporations.

‘In the context of corona, it’s not just one fraudulent corporation but dozens and dozens, plus the politicians they managed to get under their control,’ he says.

‘For me, having interviewed more than 100 experts from different fields of science – doctors, virologists, epidemiologists, economists, lawyers, psychologists, psychiatrists – there can’t be any doubt whatsoever.

‘What has been happening for a year now are the worst crimes against humanity ever, ever committed.

‘What’s even worse is that many people who are participating are the same type of people who participated some 80 years ago in what was going to be World War Two.’

But he adds: ‘Those very people who testified before our corona investigative committee can just as well testify before the courts of law – and they will.’

Dr Fuellmich says the issue has never been about the virus or health.

‘It’s always been about taking everything away from us so that we would be dependent on them – plus population reduction plus gaining complete control over those that are left,’ he says.

‘If someone had said this to me a year ago, I would have said, hey, you definitely need to see a doctor.

‘But after all the interviews we have done, this conclusion is inevitable.’

Dr Fuellmich says the people seeking to gain control of the world are a tiny minority of perhaps 3,000.

‘They are the super-rich,’ he says. ‘It’s not really about money because they have much more than they need.

‘But it is about money because they are using money to bribe the people in the hospitals, the doctors and the politicians.

‘They are using all sorts of psychiatric techniques to manipulate or threaten people.

‘This globalism is what got us here. We ended up with the World Health Organisation and the World Economic Forum – private global organisations which are run by the super-rich that have taken control all over the world.

‘These are the same ones who were responsible for the financial crisis 10 or 12 years ago.

‘In late 2019, when things were about to implode again, they came up with the coronavirus as a diversionary tactic.’

Dr Fuellmich stresses that the so-called vaccine is really a genetic experiment that has been renamed ‘vaccination’ because it’s injected.

It’s ‘extremely dangerous’ and ‘many people are dying’, he says.

In Dr Fuellmich’s view, lawyers are about to reach a tipping point because the perpetrators of the crimes are making so many mistakes, are involved in in-fighting and have contradictory interests.

‘I don’t think the adverse reactions to the so-called vaccines are part of the plan. It’s because they are trying to rush this thing through,’ he says.

‘A whistle-blower who told us the original plan was to roll this out in 2050 but those involved got greedy and pulled things forward to 2030 and then 2020.

‘That’s why so many mistakes are happening.’

Dr Fuellmich quotes a recent press release from a professor and a group of doctors which highlights that bleeding and clotting after vaccination are ‘the rule’ and that many people who die have suffered strokes and aneurysms.

Dr Fuellmich says one lawsuit has already been filed in Canada, another is ‘on its way to be filed’ and European lawyers and their Anglo-American colleagues are putting together others.

Regarding the controversial PCR test recommended by the WHO as the ‘gold standard’ and on which all other tests are based, Dr Fuellmich says 22 internationally renowned scientists have reported that the PCR test is a) ‘completely unscientific’ and b) appears to have been deliberately produced in a sloppy way ‘for the sole purpose of producing as many false positives as possible’ to further an agenda which ends with the ‘so-called vaccinations’.

‘They can’t tell you a lot about infections but the manufacturers are making a lot of money and they don’t care.

‘I’ve spoken with a couple of them and behind closed doors they admitted as much.

‘He [PCR test inventor Christian Drosten] also claimed that people showing no symptoms whatsoever – which normally means you are healthy – can be infectious.

‘It was important for him to make everyone in the world afraid of everyone else no matter how healthy they looked.

‘It’s ridiculous. If you go to a doctor the first question he’s going to ask is: “What symptoms do you have?” “None.” It doesn’t make any sense.’

Law courts in Portugal and Austria have already ruled that these PCR tests ‘don’t even come close to telling you anything about infections’.

But he adds: ‘This is so big that it’s very possible that in the end we’re going to need something like Nuremberg 2’ – a reference to the war crimes trials that followed World War Two.

Dr Fuellmich ends his interview on an optimistic note.

‘I am not a religious person but I have come to believe there are different levels of awareness beyond the rational stuff,’ he says.

‘I see a much better world at the end of this tunnel.

‘Most of the things we have become used to – our way of life – are very destructive both on a personal and a global level.

‘There is too much injustice. There are too many people trying to take advantage of other people.

‘That will change. There has been progress. More and more people are beginning to wonder.

‘We are winning some of the court battles. We will win many more.’