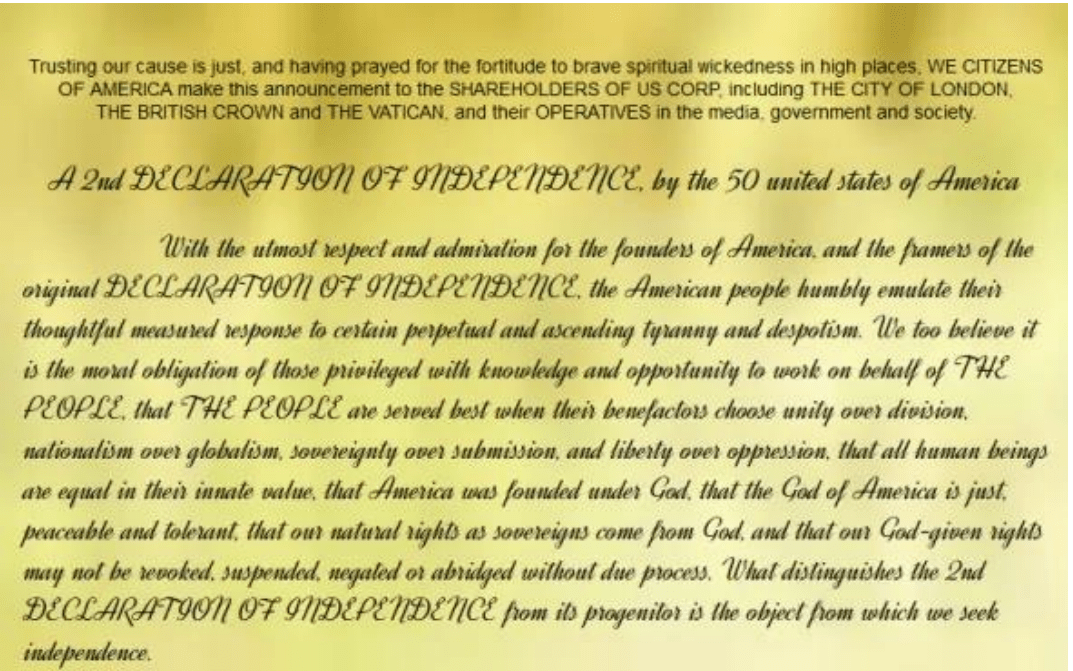 Posted on September 7, 2021 by David Robinson
By Anna von Reitz
Charlie Ward and Simon Parkes are, self-evidently, British Agents. They speak with British accents, they come from Great Britain, they are British, not American. Period. And who is always at the bottom of every dog pile? The Brits.
(This also applies to MI6-connected Sacha Stone, who somehow insinuated himself into the America RiseUp patriot tour from his mysteriously well-funded palatial retreat in Bali. The tour suspiciously broke into two conflicted factions soon after Stone’s advent, with one of the other tour principals, CIA-connected Robert David Steele, apparently dying — but also possibly “Epsteined” — under suspicious circumstances of “COVID” in hospital. And one of the main speakers, Scott McKay, was seriously sickened, along with many in attendance, with McKay’s father now dead, from poison gas piped into one of the tour’s event auditoriums. Below are evidentiary weblinks to a comprehensive two-part investigative article on “Stone” and his real-life “Adams family”. — REC
https://totaldisclosure.net/deep-dive/sacha-stone-i/
https://totaldisclosure.net/human-trafficking/sacha-stone-ii/

At least this time, they are being upfront about who they are and, more or less, what they are peddling. It is now our part to recognize who they are, and respond to their offer of a “new” Declaration of Independence with a resounding: “No, thank you, we are not that stupid. Why don’t you go home and work on learning your own Constitution?”

That’s called an offer, and a counter-offer.

What they are offering is this noble-sounding piece of Bar Association drivel: “Man Of God – Declaration of the People of the United States for Global Peace and Prosperity – Final” which was prepared by Bar Attorneys, not “the People” of this country and not by men of God, either — unless you count an ancient Babylonian Sun God as “the” God being referenced.

The actual People (State Citizens) of this country have already created a Peace Treaty among the Several States and have issued the appropriate International Peace Proclamation formally ending the so-called American Civil War.

No more legal presumption of unresolved war of any kind on our soil and shores. No more slavery or peonage exercised in any jurisdiction of the law related to our country and our people.

You lose everything that you gained as a result of the first declaration.

And that is why we would be profoundly, infinitely, unforgivably stupid to accept their declaration as anything pertaining to us or our country.

Our first and only Declaration of Independence issued in 1776 covered all the bases and speaks as clearly to the abuses of the King’s Government today as it did in 1776. All the same evils are the same.

If you don’t believe it, take time out today to sit down and read The Declaration of Independence and the long, long list of British Abuses that prompted it to be written over two hundred years ago, and you will recognize that the same British Abuses are still being practiced today. Nothing has changed. Not an iota.

The British Government and its predatory sidearm “the Crown” are still as crooked, corrupt, inept, incompetent, cruel, unjust, predatory, unreasonable, greedy, hypocritical, deceitful, dishonest, and, overall, despicable, as ever.

Apparently, they never learn anything better. They parasitize their own people to satisfy their egos and their lust for blood and their lavish life-styles, and do the same to everyone else they can entrap.

They keep on singing the same old song, over and over and over, albeit, in a different key. If it isn’t a Monarchy, it’s a Constitutional Commonwealth, and when that second evil is recognized for what it is, they relabel their same old sack of rotten turnips and restyle it as Corporate Feudalism.

It’s time for the British People who have been promised a Christian Constitutional Monarchy and been delivered a Fascist Pagan Corporatocracy instead, to tell Queen Bess and the Parliament and most particularly Boris and “Natasha” Johnson what they really think of all of them.

It’s not the Americans who need another Declaration of Independence. Ours is alive and well and as valid now as ever.

It’s the British People who need their own Declaration of Independence— and it needs to come from Bristol and Portsmouth, from Devonshire and Exeter, from Ulster and Edinburgh, from Liverpool and Glasgow and Galway— and not as something concocted by Brits “for” America.