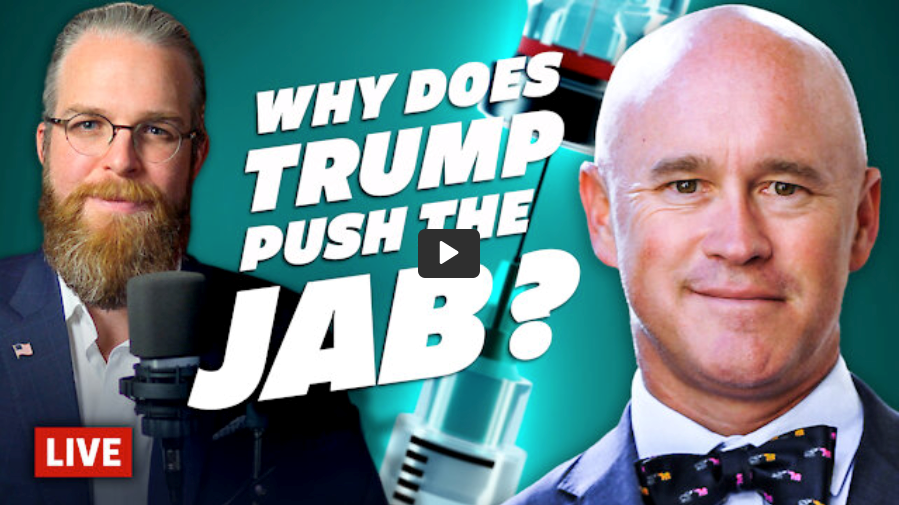 Two eye opening videos from our friends at Rumble.

Why you can’t take what Trump says at face value…

Dr. David Martin joins Man In America host, Seth Holehouse to talk about the motives for the death shot.  Click the link below to watch the video – (Warning, Adult Language)

He says that 30 years ago, it was known that Social Security was going to run out but rather than solve this, the fund was instead raided continuously and is currently set to run out in 2028.

He says that the targeting of those 65-and-older as the first in line to receive the jab was because the Government wants to shrink the pool of social security beneficiaries and this was most evident with the actions of the governors of New York, New Jersey, Pennsylvania and California, who all intentionally allowed tens of thousands of elderly patients to die with their policies of returning hospitalized COVID patients to nursing homes.

He explains that killing the elderly off is also form of gerrymandering. If you reduce the population of those over 65, who tend to be more conservative, it turns out that you get to re-district.

As for Fauci, he says he had no credentials to be “America’s doctor” for a respiratory pathogen program.

“He was put in that position to show that he had, in fact executed the coup d’état on the Presidency. This was the pharmaceutical industry having photo ops to say, ‘The President of the United States has been marginalized and emasculated and he is standing behind Fauci, he standing behind Birx, he’s standing behind Alex Azar and the fact of the matter is Trump, to this day does not understand that, not only was he played but this was a coup in which he had the coup leaders in his inner circle.”

Seth asks David about the theory that by launching Operation Warp Speed, he averted 5 to 10 years of lockdowns. David shakes his head.

“Now, Seth, the problem with that is they told us what it was. They told us that they were making a thing that made you sick but was hard to transmit. We had to look all over the place to come up with these BS stories of transmission and not one of them has been empirically shown to be the case. As a matter of fact, when a study was actually done on asymptomatic transmission, not only did we not find evidence of transmission, we could not find the provenance of the infectious agent.”

CDC Director Finally Admits that COVID Cases were Over-Counted in Hospitals– Just as Gateway Pundit and Donald Trump Reported in August 2020. The gist of the report was that COVID-19 is not nearly as deadly as first projected by the WHO and then by Dr. Tony Fauci and Dr. Debra Birx. Based on CDC numbers in Ausust only 6% of all deaths attributed to COVID-19 were instances where the only factor in the individual’s death was due to CV19. Only 9,201 people died in the US according to August numbers where COVID-19 was the only cause of death, Week ending Feb 1, 2020 – August 22, 2020.

President Trump gave an interview to Candace Owens for The Daily Wire. However, there is a segment released by Mrs. Owens where Donald Trump talks about the specifics of his position on the vaccine and the mandates.

President Trump supports the three vaccines that were developed during his administration, and is proud of the system he put into place to develop them and get them available to the public. However, President Trump does not support mandating the vaccine or forced vaccination for anyone, and believes that people should have the freedom to decide what is in their individual best interests.

President Trump notes the specific issue of a government mandated vaccine developed by a private corporation, and the risk of corruption and conflicted interests involved. President Trump accepts that reasonable people would be skeptical of the vaccine itself and would have personal reasons not to participate.

Toward the very end of the interview Trump states he is proud of the accomplishment and will not “give up” on his belief of the vaccine development as a success during his administration. However, he sees the forced mandate as very detrimental to the economy and views the consequences of the mandate itself as a problem for national security.

Given the range of opinions on the issue of the vaccines overall, and the mandate specifically, President Trump’s position seems quite pragmatic and reasonable. He’s proud to have developed the vaccines, believes they are of benefit, but strongly respects individual choice, liberty and the freedom to decide for yourself and your family.

What High’s saying is that Trump is very precise in the words he chooses and is somewhat of a code-talker. He’s suggesting that Trump’s message wasn’t actually directed at his “awake” supporters, or what High refers to as “Woo People”, but rather at the sleeping Normies who’ve bought the vax narrative, hook, line, and sinker. According to Clif High, Trump’s words should never be taken at face value and need to be parsed in order to determine their true meaning.

I concur with Clif High’s reasoning on this. Trump knows his supporters are dead-set against the jab, and I’m sure he was aware of the backlash that would come from sounding like a cheerleader on the issue, so there must be a strategic reason for him to be talking about it at all. I don’t think it’s to convince us to take it, because I’m sure he must know that, that is simply not going to happen. In fact, many of us are ready to go to war if they keep pushing. So the fact that he keeps talking about it, after getting booed, means that there must be something else going on.

I’ve shared a similar view on this, and even went as far as to say that I don’t believe Trump will start talking truth on the Jab until he’s back in office and has his hands on the levers of power. The reason why I’m able to see this, is because I realize that we are at War, and I am thinking strategically rather than emotionally.

For Trump to retake the White House, he has to unite the People and not just tell his base what they already know. Sure, hearing Trump come out against the Jab would certainly “feel good”, but what effect would that have on the sheep who’ve already gotten the suicide-shot?

We all know that when the sheep finally understand what’s been done to them, they’ll lose their shit and burn the entire system to the ground. If this happens in America while the globalists have the reins of power, the United States will completely collapse. Which despite the “feel good” thought of some of the perpetrators of this Covid-Crime getting torn to pieces by an angry mob, it would be short-lived as the CCP swooped in and took full advantage of a completely nonfunctioning United States government.

The timing of this part of the #GreatAwakening has to be perfect, and it has to be done in such a way that inspires hope. If the jabbed believe they’re under a death sentence, they’ll go on the war path. So when this happens, they either need to be too weak to do anything, or the news has to be delivered with hope for treatment. How could that happen with Biden in office? – (Kenan)

Trump is trusting the people to know the difference between an ( experimental ) drug and a REAL, time tested , vaccine. You can’t save the ignorant from their lack of research and laziness. I have put the sheep out to pasture. I can’t and won’t be responsible for their own free will.

Disclaimer:
This video is not intended to provide legals, finance, assessment, diagnosis, treatment, or medical advice; it also does not constitute provision of healthcare services. The content provided in this video is for informational and educational purposes only.
Please consult with a physician or healthcare professional regarding any medical or mental health related diagnosis or treatment. No information in this video should ever be considered as a substitute for advice from a healthcare professional.

“Early Treatment Protocols”
AAPS has put together most of the early treatment protocols that I am aware of. Nicely done!
https://c19protocols.com

Private/Incognito Mode to search world wide serious side effects, the last time I checked, USA alone was 1.1 millions http://vigiaccess.org (founded by WHO)