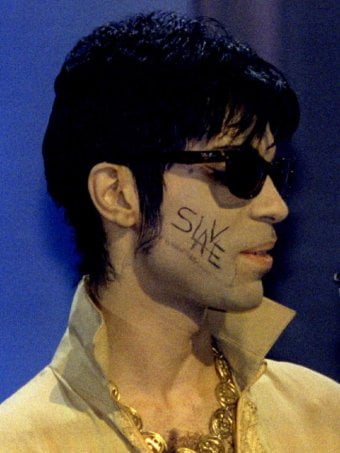 Silenced By The New World Order

We all know the New World Order global elite consider outsiders to be dangerous to their agenda. Especially outsiders like Prince, a man with fame, wealth, an appetite for truth, a fascination with symbolism and numerology, and a willingness to speak out about what he knew.

It’s a sad day. We have lost Prince, one of those rare, fearless people, an advocate for truth, prepared to stand up to the powers that be and expose them for what they are.

Prince knew the score.  He famously walked around at the Grammys with SLAVE written on his cheek to protest against the terms of his contract with a multinational corporation.  He told us we were all becoming slaves living on a New World Order slave plantation.  He went on mainstream TV and told millions about the chemtrail agenda.

He was fighting the good fight.

But who was Prince Rogers Nelson behind the scenes?  How close was this enigmatic artist to the Illuminati and how much did he know?

‘I am something that you just can’t understand,’ he sang on I Would Die 4 U, a single from the mega-selling Purple Rain, the release that propelled him into the stratosphere, earning him a place among the global elite.

The Illuminati certainly didn’t understand him.  He was courted by them, he learned their secrets, but he didn’t accept their agenda.   He remained a stubborn outsider to his very last days.

We all know the New World Order global elite consider outsiders to be dangerous to their agenda.  Especially outsiders like Prince, a man with fame, wealth, an appetite for truth, a fascination with symbolism and numerology, and a willingness to speak out about what he knew.

Prince had been making it known that he was writing an explosive tell-all memoir.  It was to be published next year.  How far was he prepared to go in this book?  Knowing Prince, he wouldn’t be afraid of treading on toes, offending those in power, or being laughed at by an ignorant mob.

Was this advocate for truth taken out by the NWO?  Have they finally silenced him?  His appearances on mainstream TV in recent years, using his fame to preach directly to millions about the chemtrail agenda and Illuminati activity, might have been the final straw as far as the NWO were concerned.

Prince was a dangerous outsider, an elite rebel, who wouldn’t play their game.  Incorruptible by money or fame, he was 57 years old and in good physical and mental health.  His work rate and ambitions for the future were not winding down, they were actually speeding up.

It seems he has joined the likes of Stanley Kubrick as someone who knew too much and got silenced by the Illuminati just as he started speaking out about their activities and agenda, using his influence to preach against their ultimate goals.  Those in the know are suggesting Prince was silenced in a Spring sacrifice by the New World Order, killed on the Queen’s birthday.

Dying of flu or flu-like symptoms is usually a euphemism for something far darker.  In Prince’s case do not be surprised if this clean-living, courageous advocate for truth was taken out by the powers that be.