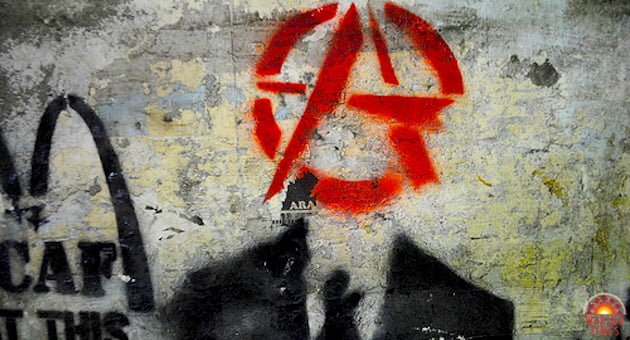 “The most useful piece of learning for the uses of life is to unlearn what is untrue.” ~Antisthenes

That said, here are four things you probably didn’t know about anarchy.

“No man is free, who is not master of himself.” ~Epictetus

If self-rule is the foundation of anarchy, then, freedom is its cornerstone. We simply cannot call ourselves free if we are a statist, for statism implies that one fall under the overreaching power and outdated laws of the state, which is the opposite of freedom. Under a banner of anarchy one can consider himself free because he falls under the laws of reason, the non-aggression principle, the Golden Rule, and cosmic law. As long as these vital laws of social survival are not violated, one can call himself free and an anarchist. As long as they are violated, one cannot claim freedom, only delusion, corruption, violence, and immorality.

“It is forbidden to kill; therefore all murderers are punished unless they kill in large numbers and to the sound of trumpets.” ~Voltaire

The non-aggression principle is another cornerstone of anarchy. One need not be violent in order to be a free, self-ruling anarchist. One need only apply self-defense when needed, while making sure not to succumb to offensive overreach or of lording one’s power over others. Freedom is paramount, including the freedom of those who think differently. That doesn’t mean people are free to kill or injure or steal. It means people are free as long as they are upholding the non-aggression principle while also upholding a stout and vigilant self-defense against these few who would kill, injure, or steal.

Statism, on the other hand, does not honor the non-aggression principle. It blatantly violate it. it uses the monopoly on violence to keep its non-free statists in line and obedient. yet again it is clear that statism is the opposite of freedom.

“He is a man of courage who does not run away, but remains at his post and fights against the enemy.” ~Socrates

The typical statist reaction to an anarchist rant is to either be reduced to ad hominem attacks or to say one of two things: “But what about muh roads!” Or, “If you don’t like it here then move.” As ignorant as these comments are they are coming from a place of blind patriotism and naive xenophobia. What the statists who say such things don’t realize is that no matter where one goes, one will be a victim of a nation sate. This is because statism is a pandemic psychosocial disease and a worldwide religion that trumps all other religions.

Better to remain in the place where you were born, rise up with your sound anarchist principles in hand, and defy the immediate state with your blatant self-rule and your in-your-face freedom, than to go to another state that you are not familiar with and potentially drown in culture shock. Better to fight for your own sovereignty where you were raised, than to interfere in a place you are unfamiliar with and have to worry about survival before sovereignty.

“Nature is not our enemy to be raped and conquered. Nature is ourselves, to be cherished and explored.” ~Terence McKenna

Anarchy is the natural default social governing system, for healthy human beings otherwise there is oppression, slavery, and/or tyranny. Anarchy is not only how healthy and free human beings “govern” each other, but how they act in accordance to cosmic laws. For in order to maintain one’s freedom, one must not violate cosmic laws lest the backlash of those laws cripple one’s freedom due to the collapse of the ecosystem.

A true anarchist understands that he or she is a vital independent part of an interdependent whole. Everything is connected, to include the action of the individual. Thus, an anarchist tends to be eco-conscious while acting on eco-centric principles, while a statist tends to be eco-unconscious while acting on ego-centric principle- “tends” being the keyword.

When it comes down to it, the concept of anarchy is unnecessarily confusing, unless you are purposefully trying to keep people ignorant. But in the age of information there is no excuse for remaining ignorant- especially regarding such an important topic as anarchy. And especially in regards to the statism that threatens to consume us all in its unhealthy, unsustainable, ecocidal, violent, and all-consuming maw.