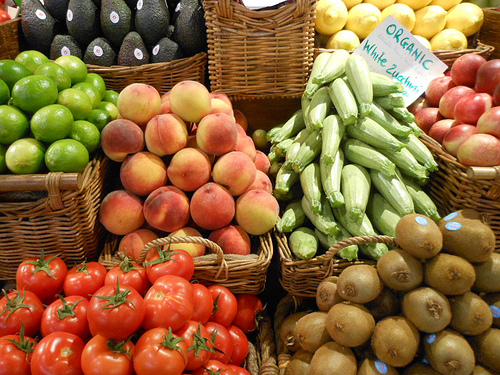 Is it really worthwhile to spent more money on locally grown organic fruits and vegetables than non-organic fruits and vegetables? The answer is a resounding “YES!”Organic grown foods have significantly more vitamins, antioxidants and secondary metabolites such as phenolic compounds than non-organic foods. These compounds provide protective health benefits and lower the risk of cancer, cardiovascular disease, type two diabetes, hypertension and many other chronic health conditions (Romagnolo & Selmin, 2017; Wilson et al., 2017; Oliveira et al., 2013; Surh & Na, 2008). We are what we eat–we can pay for it now and optimize our health or pay more later when our health has been compromised.

The three reasons why fresh organic food is better are:

With the advent of chemical fertilizers farmers increased crop yields while the abundant food became less nutritious. The synthetic fertilizers do not add back all the necessary minerals and other nutrients that the plants extract from the soil while growing. Modern chemical fertilizers only replace three components–Nitrogen, Phosphorus and Potassium–of the hundred of components necessary for nutritious food. Nitrogen (N) which promotes leaf growth; Phosphorus (P which development of roots, flowers, seeds, fruit; and Potassium (K) which promotes strong stem growth, movement of water in plants, promotion of flowering and fruiting. These are great to make the larger and more abundant fruits and vegetables; however, the soil is more and more depleted of the other micro-nutrients and minerals that are necessary for the plants to produce vitamins and anti-oxidants. Our industrial farming is raping the soils for quick growth and profit while reducing the soil fertility for future generations. Organic farms have much better soils and more soil microbial activity than non-organic farm soils which have been poisoned by pesticides, herbicides, insecticides and chemical fertilizers (Mader, 2002; Gomiero et al, 2011). For a superb review of Sustainable Vs. Conventional Agriculture see the web article: https://you.stonybrook.edu/environment/sustainable-vs-conventional-agriculture/

3, Organic foods reduce exposure to harmful neurotoxic and carcinogenic pesticide and herbicides residues. Even though, the United States Department of Agriculture (USDA) and the United States Environmental Protection Agency (EPA) state that pesticide residues left in or on food are safe and non-toxic and have no health consequences, I have my doubts! Human beings accumulate pesticides just like tuna fish accumulates mercury–frequent ingesting of very low levels of pesticide and herbicide residue may result in long term harmful effects and these long term risks have not been assessed. Most pesticides are toxic chemicals and were developed to kill agricultural pests — living organisms. Remember human beings are living organisms. The actual risk for chronic low level exposure is probably unknown; since, the EPA pesticide residue limits are the result of a political compromise between scientific findings and lobbying from agricultural and chemical industries (Portney, 1992). Organic diets expose consumers to fewer pesticides associated with human disease (Forman et al, 2012).

Adopt the precautionary principle which states, that if there is a suspected risk of herbicides/pesticides causing harm to the public, or to the environment, in the absence of scientific consensus, the burden of proof that it is not harmful falls on those recommending the use of these substances (Read & O’Riordan, 2017). Thus, eat fresh locally produced organic foods to optimize health.References