Prepare For Change
Home Awakening WAS QUETZALCOATL AN EXTRATERRESTRIAL? HERE’S HOW MESOAMERICAN “MYTHOLOGY” DESCRIBED HIM 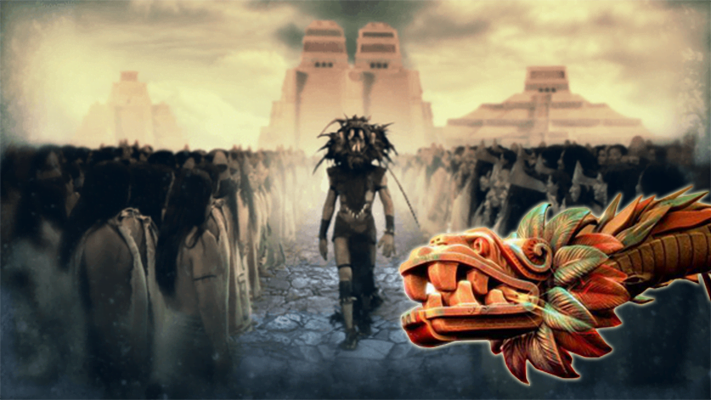 With the recent release of the Pentagon’s UFO footage, which comprised of two videos filmed by U.S. Navy pilots of objects performing maneuvers that defy our current understanding of aerodynamics, the topic of UFOs has once again grabbed headlines around the world.

The video was a step forward towards disclosing the fact that there are unknown objects in our atmosphere that are commonly spotted and tracked on radar by defence authorities. They are highly technologically advanced, more so than any air-craft which is available in any global inventory at the moment.

Further to this, many people have had strange sightings that don’t really ‘make sense,’ in the realm of known aircrafts. The frequency of these sightings are not uncommon these days, especially for avid star gazers.

Haven’t seen one yourself? Well, how often are you looking up into the night sky? For many people, the answer is little to never.

Who Man’s These Craft’s?

The next question to be asked is, are these objects, or at least some of them, extraterrestrial?

According to one of the pilots who filmed the UFO released by the Pentagon, yes, they are, at least that’s their belief. The Pentagon’s “aerial defence” program director, Luis Elizondo also shared his belief that they are, along with hundreds of other high ranking personnel from several branches of military, intelligence, academia, aerospace and academia. He said that there is plenty of evidence to make that connection… The most recent example might be Robert Bigelow, founder of the Bigelow Aerospace corporation who, not long ago, stated that he knows we are being visited, and have been visited by ET’s.

“Yes there have been crashed craft, and bodies recovered. . . . We are not alone in the universe, they have been coming here for a long time. . . . I happen to be privileged enough to be in on the fact that we have been visited on this planet, and the UFO phenomenon is real.”

I elaborate on that discussion in a recent article, if you’re interested:

It’s Official, We Know That UFOs or “UAP” Are Real, So Are They Extraterrestrial or Not?

Ancient history is fascinating to say the least, and we’ve discovered so much about it. But, at the same time, we still know very little about Earth’s history and even the history of humanity. One of the most fascinating points to make about ancient history is that much of which was once considered mythological, is actually turning out to be true.

Perhaps information that didn’t fit within our framework of accepted knowledge was deemed mythological? How can we take seriously the writings of ancient Greek philosophers when describing social life and other aspects of humanity, yet when it comes to other areas of the world, like the Oracle at Delphi, they are placed in a the mythological realm? 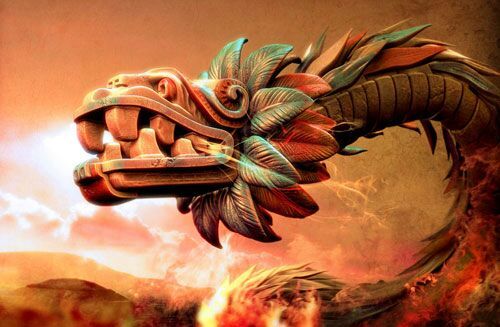 Another great example is the Lost Land of Atlantis, a highly technologically advanced civilization that would shake what we thought we knew of human history, it’s not so much a tale anymore, and it’s one of many examples that show what we’ve been taught may not be completely correct.

For anybody who has done their research in this area, it’s quite clear given the evidence we now have, that Atlantis was far from a mythological place. Given our research on Atlantis, and many scholars out there, Atlantis is no joke, and perhaps before that, Lemuria as well.

This is why when it comes to stories of figures like Quetzalcoatl, it’s always interesting to contemplate that they were real.

The video footage mentioned above, which was released by the Pentagon, was done so in conjunction with To The Stars Academy headed by Tom Delonge, along with Luis Elizondo (mentioned earlier), and several other figures who’ve held high level positions within the Department of Defence. The Pentagon is working with the academy in the disclosure of UFO’s.

That in itself is a completely different discussion with many implications. It’s hard to trust the government these days, so can we really trust them with UFO disclosure and what that means? Will leave this for another time.

Delonge recently made some interesting comments about his experiences so far, and the contacts he’s been able to make, and the discussions that have been had.

Tom states in a Podcast with Joe Rogan:

“I went and met a former director of the CIA and NSA…Right when I sat down and told him about the book you know what he says to me? He goes, “I didn’t read much science fiction when I was a kid but I read a lot about Greek mythology”…The sixth biggest defense contractor in the world is a company called Science Applications International Corporation (SAIC)…and in the front of the building (SAIC’s headquarters) you have an obelisk coming out of a fake leg and two Atlantians on thrones, and they’re both holding pyramids and one says the past and one says the future, and they’re 8 foot tall statues.” 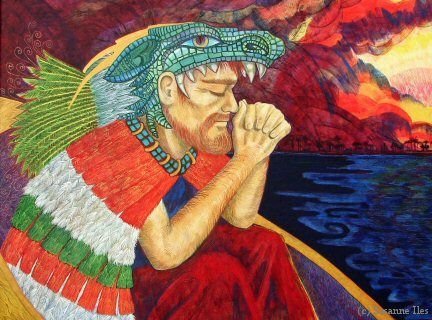 So, who was Quetzalcoatl? Considered to be a mythical tale, Spanish chronicler Juan de Torquemada states that Quetzalcoatl was ‘a fair and ruddy complexioned man with a long beard. Another describes him as follows:

“A mysterious person…a white man with strong formation of body, broad forehead, large eyes, and a flowing beard. He was dressed in a long, white robe reaching to his feet. He condemned sacrifices, except of fruits and flowers, and was known as the god of peace…When addressed on the subject of war he is reported to have stopped up his ears with his fingers.”  (source)

Graham Hancock, one of the world’s foremost researchers into such things, describes another description from Central American Mayan tradition in his book, Fingerprints of the Gods:

“He came from across the sea in a boat that moved by itself without paddles. He was a tall, bearded white man who taught people to use fire for cooking. He also built houses and showed couples that they could live together as husband and wife; and since people often quarrelled in those days, he taught them to live in peace.”

This figure is spoken of the Mesoamerican culture.

It’s interesting because there are multiple accounts of various figures, not just Quetzalcoatl, all of which seemed to have provided humanity with a little ‘push’, here and there, and assistance with regards to discovery. Nothing was really done for humanity, it seemed that the common theme through all of these contacts was for us to better ourselves, and be responsible for our own progression, with a little bit of assistance.

Not all of the ‘gods’ were kind, loving and peaceful. There were others who required sacrifices, and seemed to almost be a little opposite of ones like Quetzalcoatl. 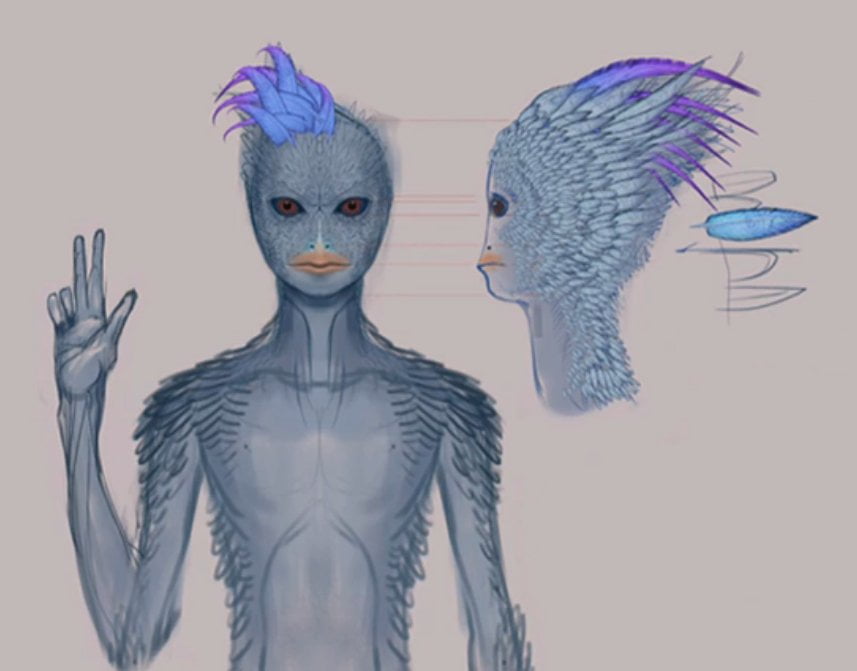 Ancient history, along with many ancient cultures who pre-date modern-day religion, all have very interesting stories which can easily be interpreted has highly advanced beings from another place.

The idea that these are just mere interpretations seem to be dwindling every year. Being an avid researcher in the field for more than a decade, I can tell you that extraterrestrial intelligence is just the tip of the iceberg. It truly does open up Pandora’s box, and there is much more to this universal story, so much so that we probably couldn’t even comprehend it.

The evidence today points to the idea that we’ve been visited for a long time, so to contemplate the idea that these were extraterrestrial visits is not out of the question.

“There are objects in our atmosphere which are technically miles in advance of anything we can deploy, that we have no means of stopping them coming here … [and] that there is a serious possibility that we are being visited and have been visited for many years by people from outer space, from other civilizations….Who they are, where they come from, and what they want. This should be the subject of rigorous scientific investigation and not the subject of ‘rubishing’ by tabloid newspapers.”

If they have been here as well as visiting us for a long time, that’s good news. It takes out the idea of an ‘extraterrestrial invasion’, because, if that were the case, it would have already happened by now.

To find all of our archived articles on the UFO/Extraterrestrial phenomenon, you can visit theexopolitics section of our website.

The meaning of Quetzalcoatl is “feathered serpent,” this is the translation that comes from ancient South America, from the Maya and the Aztecs. In Hancock’s book, he goes on to describe how there were other entities who resembled Quetzalcoatl  quite closely:

“There were other deities, among the Maya in particular, whose identities seemed to merge closely with those of Quetzalcoatl. One was Votan, a great civilizer, who was also described as pale-skinned, bearded and wearing a long robe. Sholars could offer no translation for his name but his principal symbol, like that of Quetzalcoatl, was a serpent. Another closely related figure was Itzamana, the Mayan god of healing, who was robed and bearded individual, his symbol, too, was the rattlesnake.”

Graham, in his book, goes on to state:

“All of the legends stated unambiguously that Quetzalcoatl/Kukulkan/Gucumatz/Votan/Itzamana had arrived in Central America from some-where very far away (across the “Eastern Sea”)  and that amid great sadness he had eventually sailed off again in the direction whence he had come.”

This is an interested quote, and relates closely to a sentiment shared by a First Nations Canadian storyteller, Richard Wagamese:

“My people tell of Star People who came to us many generations ago. The Star people brought spiritual teachings and stories and maps of the cosmos and they offered these freely. They were kind, loving and set a great example. When they left us, my people say there was a loneliness like no other.” (source)

Interesting to think about. These are versions of history that old more plausibility to them than the ones we currently consider concrete. As we continue to move forward exponentially, perhaps our destiny is in the stars and we ourselves one day will be the extraterrestrials, or perhaps we already are.