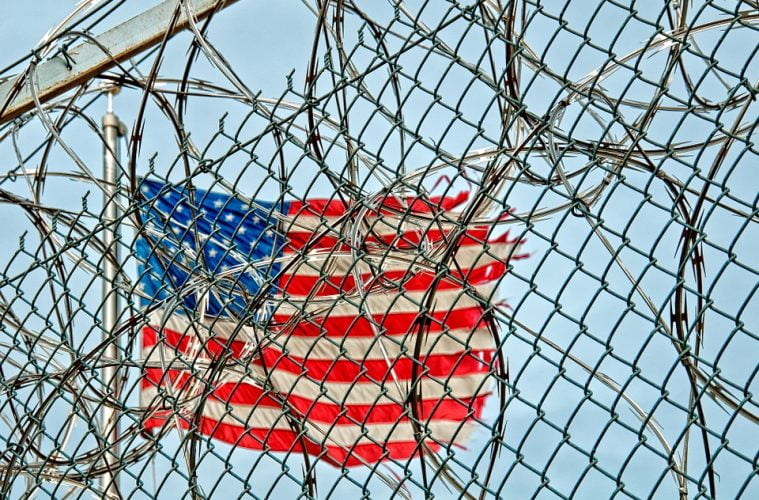 Prison is big business, and working prisoners are a corporation’s dream. Prisoners are being contracted for work right now on a massive scale, and despite the alarming and unsustainable growth of inmate numbers in the United States, incentive to lock people up is only increasing. This is the income that prisons — comprising one of the fastest-growing industries in the United States, backed by Wall Street — depend on:

Now prison labor based in private prisons is a multimillion-dollar industry with its own trade exhibitions, conventions, websites, and mail-order/Internet catalogs (Pelaez 2008). . . . The industry also has direct advertising campaigns, architecture companies, construction companies, investment houses on Wall Street, plumbing supply companies, food supply companies, armed security, and padded cell manufacturing, all of which rival those of any other private industry (Pelaez 2008). Furthermore, private prisoners at the state level produce a variety of goods and services, from clothing to toys to telemarketing and customer service (Erlich 2005). The private federal prison industry also produces nearly all military goods, from uniform helmet to ammunition, along with durable goods ranging from paint to office furniture (Pelaez 2008). (source)

Did you know that corporate stockholders who profit from prison labor lobby for longer sentences? They do this to expand their workforce, and so, according to a study done by the Progressive Labor Party, “the system feeds itself.” The PLP also accuses the prison system of being “an imitation of Nazi Germany” with regards to forced slave labor and concentration camps.

If we look at the history of prison labour in the United States, it becomes immediately apparent that the entire system is birthed out of racism. After the civil wars of the mid-to-late 18th century, the system of hiring prisoners was established in order to continue the slavery that had dominated previous years. This was, of course, a time when racial segregation was legal across the United States:

Prison labor has its roots in slavery. After the 1861-1865 Civil War, a system of “hiring out prisoners” was introduced in order to continue the slavery tradition. Freed slaves were charged with not carrying out their sharecropping commitments (cultivating someone else’s land in exchange for part of the harvest) or petty thievery – which were almost never proven – and were then “hired out” for cotton picking, working in mines and building railroads. From 1870 until 1910 in the state of Georgia, 88% of hired-out convicts were Black. In Alabama, 93% of “hired-out” miners were Black. In Mississippi, a huge prison farm similar to the old slave plantations replaced the system of hiring out convicts. The notorious Parchman plantation existed until 1972.(source)

Vicky Pelaez, a Peruvian journalist and columnist for The Moscow News, points out that dozens of states have legalized the contracting of prison labor to corporations, which include such names as: IMB, Boeing, Motorola, Microsoft, AT&T, Wireless, Dell, and many more. Some of these inmates are getting approximately $2 a hour. She also outlines how inmates are commonly imported and exported.

A surprising number of well-known corporations are making a killing off of the prison industrial complex, as you can see below.

The state allows inmates to work for the profit of a private corporation, and Whole Foods is one of many companies that takes advantage, buying fish and cheese produced by prison inmates and paying them a rate of .74 cents a day. They then increase the price of the product astronomically – tilapia raised by inmates, for example, sells for $11.99 a pound at Whole Foods — and enjoy all the profits. (source)

It’s no secret that McDonalds is suffering right now; in a world where people are steadily waking up and moving towards a healthier lifestyle, there is no place for such heavily processed and unethical ‘food.’ Yet despite being the world’s most successful fast-food chain, they still source many of their goods from prisons, including their containers, uniforms, and cutlery. The inmates who sew the uniforms hardly make anything. (source)

Although their company policy expressly outlines that forced labor, as well as prison labour, is unacceptable, a large portion of products sold in their stores have been supplied by third-party prison labor factories. Wal-Mart purchases its products from prison farms, where workers are put through several hours of intense labor, in difficult conditions, without sunscreen, water, or food —not to mention, basically working for free. (source)

Undergarments and casual wear are sewn by female inmates for Victoria’s Secret. In fact, in the late 1990s 2 prisoners were placed in solitary confinement for telling journalists that they were hired to replace “Made in Honduras” garment tags with “Made in U.S.A” tags. (source)

This is a surprising one. When BP spilled several million barrels of oil into the Ocean (Gulf Coast), the company sent a workforce of prison inmates — almost all of them African-American — to handle cleanup, despite there being scores of displaced coastal residents desperate for work. The move sparked considerable outrage, particularly since BP not only saved money by hiring inmates over locals, but also through the significant tax breaks they received as a result. (source)

In 1993 the company laid off thousands of telephone operators, who were all union members, in order to increase their profits. Despite being vocally against prison labour, they went on to hire inmates to work in their call centres, paying them a mere $2 per day. (source)

This is a company that provides food to hospitals, schools, and colleges. They also have a monopoly on food served in approximately 600 prisons. They have a history of poor food service, a problem which led to a prison riot in Kentucky in 2009. (source)

Even though various social, political, and human rights organizations have condemned the United States’ prison system, it remains one of the biggest businesses in existence today. Did you know that America has four percent of the world’s population, yet still carries approximately twenty five percent of the world’s prison population? That is a staggering number. America has the highest incarceration rate in the world and it is increasing exponentially each year. Almost half of American juveniles will have been arrested before they reach their 23rd birthday, and children as young as 13 years old have been sentenced to die in prison. The cost of this system? Approximately $75,000,000,000 a year…

These are just a few startling statistics outlined in the video below. Check it out.