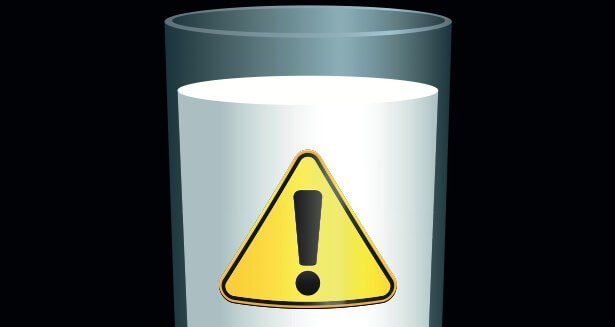 Today, Americans consume an enormous amount of dairy. The intake of the average American is estimated to be over 600 pounds of dairy products per year.[1]

Dairy foods (including cow’s milk) have not been part of the diet of adults for the vast majority of human evolution.[2] We’ve only been consuming these foods for about 7,500 years,[3] compared to the roughly 200,000 years humans have been around (with our basic biochemical functionality evolving still a few million years before that).[4]

Intensive and successful marketing by the dairy industry (including slogans like “Milk – It Does a Body Good” and “Got Milk”) have reinforced a broadly ingrained belief that dairy is good for our health. But is it, really?

Dairy has come under fire and scrutiny from nutritional experts, scientists and physicians for its associations with a number of serious health issues.

Dairy is a significant source of female hormone exposure.[5] Commercial cow’s milk contains large amounts of estrogen and progesterone, which is a serious concern. This is further exacerbated by modern dairy cows being genetically altered to continuously produce milk – even throughout their repeated pregnancies.[5] [6]

Even milk products labeled “organic” or “no hormones added” usually contain high levels of these problematic hormones, which are naturally produced by cows (even if those cows have not been given any additional hormones for purposes of the product label).

Also, while there is a culturally popular idea that soy foods may cause feminizing effects, several studies have found that isoflavones (the plant-derived compounds in soybeans with estrogenic activity) do not exert feminizing effects on men, even at high consumption levels.[16] Other studies have found that soy food consumption is even protective against breast cancer.[17] [18] I think we should be far more concerned about the high levels of real female sex hormones found in dairy, the consumption of which results in measurably higher circulating levels of these problematic hormones.[5]

Casein is the main protein in dairy, and studies have shown that it facilitates the growth and development of cancer. In fact, some studies even found that cancer development could be controlled more by casein levels in diet than by exposure to the underlying carcinogen.[19]

Insulin-like growth factor-1 (or IGF-1), a hormone that promotes cell growth and division in both normal and cancer cells, is thought to be one of the mechanisms responsible for this association. IGF-1 appears to be nutritionally regulated, and animal protein consumption (including casein from dairy foods) leads to higher circulating levels of this cancer-promoting hormone. For this reason, consuming casein from dairy (as well as animal protein in general) is associated with increased risk of cancer development and proliferation.[19-25]

Our immune system normally protects us from microbes and other harmful substances. But if it loses its ability to recognize and distinguish harmful substances from normal tissues and cells, it can instead mount attacks against our own bodies.

These “auto-attacks” can be triggered by exposure to foreign peptides (including animal protein fragments found in dairy), which have similarities to components in the human body. This can result in our immune system becoming “confused” and misidentifying tissues in our body as “foreign” and thus in need of being attacked and destroyed.

Dairy is associated with increased risk of several immune-related disorders (from allergic conditions to autoimmune diseases), many being life-changing and difficult to treat. The associations with type 1 diabetes and multiple sclerosis are particularly concerning:

Milk and other dairy products are important vehicles for foodborne pathogens due to a variety of microorganisms they harbor.[34] Even with modern sanitation requirements, including pasteurization and curing, outbreaks still occur, resulting in severe and sometimes even fatal outcomes.

Not even our food regulatory agencies expect milk will be sterile after pasteurization; the heating process is done merely to reduce (not eliminate) the amount of microorganisms.

Exposure to organochlorine pesticides (OCP) is another problem associated with dairy. While pesticide contamination affects water and agricultural lands generally, dairy products have a greater capacity to accumulate these pesticides in higher concentrations, due in part to their high fat content.[38] [39]

Even pesticides that have long been banned still show up when dairy products are tested. Some OCPs (like DDT, which was widely used in the past and now banned as a human carcinogen) still persist in the environment and can more easily accumulate in animal food products, including dairy.

In India, milk and other dairy products (like cheese and butter) have been reported as the major sources of dietary DDT and hexachlorocyclohexane (HCH),[40] and routine monitoring detected that milk from dairy farms in Italy’s Sacco River Valley had levels of ß-HCH twenty times higher than the legal limit.[41]

The largest use of antibiotics worldwide is for livestock.[42] Much of that use is for non-therapeutic purposes, such as infection prevention and to promote feed efficiency and animal growth.[43]

Apart from the dire warnings from scientists that agricultural overuse is leading to antibiotic resistance,[44] [45] another problem is that antibiotic residues persist in milk and other dairy products despite protocols aimed to minimize this.

It is difficult to prevent and control these antibiotic residues because milk from individual cows and farms is usually pooled together, and the administration, handling and record-keeping of animal drug use can vary significantly from one dairy operation to another.[46]

The resulting low-dose antibiotic exposure can lead to a variety of problems, from developing antibiotic resistance to allergic reactions to experiencing side-effects of the medication to which a person is exposed.

7. Dairy Can Lead to Bone Problems Too

This may come as a surprise to many, but dairy does not appear to be good for bone health, either.

Not only has the body of scientific evidence been found inadequate to support the idea that dairy consumption promotes bone health,[47] but numerous large-scale studies have found that consuming dairy may actually be detrimental to bone health.[48-51] In fact, there is substantial data linking higher milk intake with significantly increased risk of bone fractures.[48] [49] [50] [51]

There are several mechanisms thought to be responsible for the pathophysiology. One is dairy’s high calcium content, which can cause vitamin D dysregulation and therefore disrupt bone homeostasis. Another is that the high animal protein content of dairy can induce acidosis from its high proportion of sulfur-containing amino acids, which in turn leads to the body compensating by leaching calcium from the bones to help neutralize the increased acidity. Over time, all of this can have a detrimental effect on bone health.[49-60]

While several other factors, such as physical activity, can affect bone health, it’s significant to note that the U.S. has one of the highest rates of hip fractures in the world, despite our high milk intake. By contrast, in countries like Japan and Peru, where average daily calcium intake is as low as 300 milligrams per day (less than a third of the U.S. daily recommendation for adults), the incidence of bone fractures is actually quite low.[48] [49] [61]

Fortunately, calcium is abundant in plant foods, including leafy green vegetables, legumes and seeds, often with higher absorption rates than the calcium in dairy—and of course without all of dairy’s associated health problems.

Each mammalian species produces milk for its own babies, and the content of proteins, fats, carbohydrates and minerals is specific to provide optimum nutrition for a baby of that particular species. The milk from an elephant, tiger, sea lion and cow are each different from one another, and they are all different from human milk.

When we think about it, the health problems associated with consuming the milk and dairy products of other species should not come as any surprise. No other species consumes milk regularly past the weaning period and certainly not from another species—and, as mentioned above, we humans have also not being doing so for the vast majority of our own evolutionary history.

Fortunately, with plant milks, such as soy, almond and rice now available, as well as delicious plant-based versions of other dairy products, it’s never been easier or more convenient to completely avoid dairy.