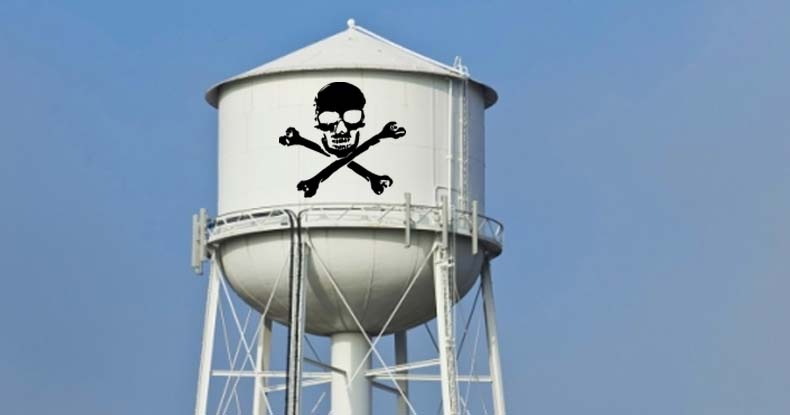 Water, water, everywhere, nor any drop to drink.
The Rime of the Ancient Mariner (1798)
Samuel Taylor Coleridge

Even though the above verse describes a setting of a mariner lost at sea with water all around, he still does not have any clean or unpolluted water to drink because it’s all salt water that will contribute to his demise! Even salt can be considered a pollutant.

In ancient times, before man-made chemical agents, invading tribes often would spread salt over growing fields, which would leave them fallow for years on end where no food could be grown. At one time using salt was an apparent terrorist-like activity?

In today’s fear-mongering and fear-based cultures, modern chemicals are used to effectuate similar effects. Recall all the Agent Orange sprayed on Vietnam! Such toxic chemicals really don’t disappear; they ‘disappear’ into the ground and contaminate “ground water” and aquifers, which many rural residents depend upon by using well water.

We have the very same thing legally going on today with fracking. Toxic fracking chemicals are inserted into shale deposits and those numerous toxic chemicals migrate into personal wells and other underground ‘rivers’ and water reservoirs.

Have you ever seen tap water burn? That’s one of the ‘benefits’ of fracking. Here’s a 1:43 minute video demonstrating tap water burns when lit by a match.

A Nebraska farmer invites politicians to drink fracking water, but apparently they won’t!

For these reasons, the existing projects must be immediately shut down and the Board should not approve any additional projects.

Another technology and “modern” concern about water, since most folks know the ‘old’ ones of the past, is contaminated rain water or rain water produced from toxic chemtrails used in weather geoengineering, weather management, Solar Radiation Management (SRM) or what is happening right above our heads: those lines sprayed in the sky by airplanes, which are not contrails, as some gullible people want to believe.

If those sky lines were real contrails, how come they are not in the sky every time we are permitted to have a clear blue sky? Don’t commercial airlines and other planes fly on clear blue sky days?

So, what kinds of toxins have been found in snow and rain water recently? In November 2017, I did some certified lab rain water testing and reported on the findings here. The website Stop Spraying California! enumerates numerous toxic chemicals found in independent analyses:

Not only do the above toxins pollute water everywhere, but all living beings also breathe in those contaminants! Ever think of that?

Toxic drain cleaners are other water contaminants that pollute people’s drinking water supplies downstream. So do drugs (contraceptives, etc. [2] ) and medications used, including those excreted in urine [3] and human feces! Even cancer drugs are found in tap water [4]!

Literally, any prescription drug taken is NOT fully utilized nor totally bioavailable to the human organism, so some is excreted via the kidneys and goes down the toilet and into water supplies downstream where municipal water treatment facilities cannot remove them, unfortunately!

What happens to all those caustic and toxic cleaning agents used to clean a bathroom, kitchen floor or to ‘sanitize’ something? Waste water usually is poured down the drain! Those, too, are included in the chemical brew municipal ‘potable’ water folks drink and hope they can keep clean by using inexpensive filters.

Probably the most efficient toxin removal process to date is reverse osmosis. If you cannot afford a full house system, purchase and install an under-the-kitchen-sink unit from which you take water for drinking, eating, cooking and whatever goes into your and your family’s bodies.

I’ve not mentioned fluoride, a protoplasmic poison in municipal water sources since January 1945! [5]

Nor have I mentioned all the chemicals used to make municipal water supplies “potable” and “safe for human consumption.” No one listens to what can be done to make water safer. Why? Because the chemical industry produces chemicals, “which make water safe,” according to accepted mainstream knowledge. One safe process is “Ozonization” [6]. The use of chlorine and chloramines, both of which are toxic, adds double whammies to municipal water systems [7].

Water soon may become a very expensive commodity! Why? Because certain vested interests are planning for “water wars.”

The Rime of the Ancient Mariner
https://en.wikipedia.org/wiki/The_Rime_of_the_Ancient_Mariner

How To Remove Fluoride From Tap Water
https://www.best-osmosis-systems.com/water-filter-flouride-removal/