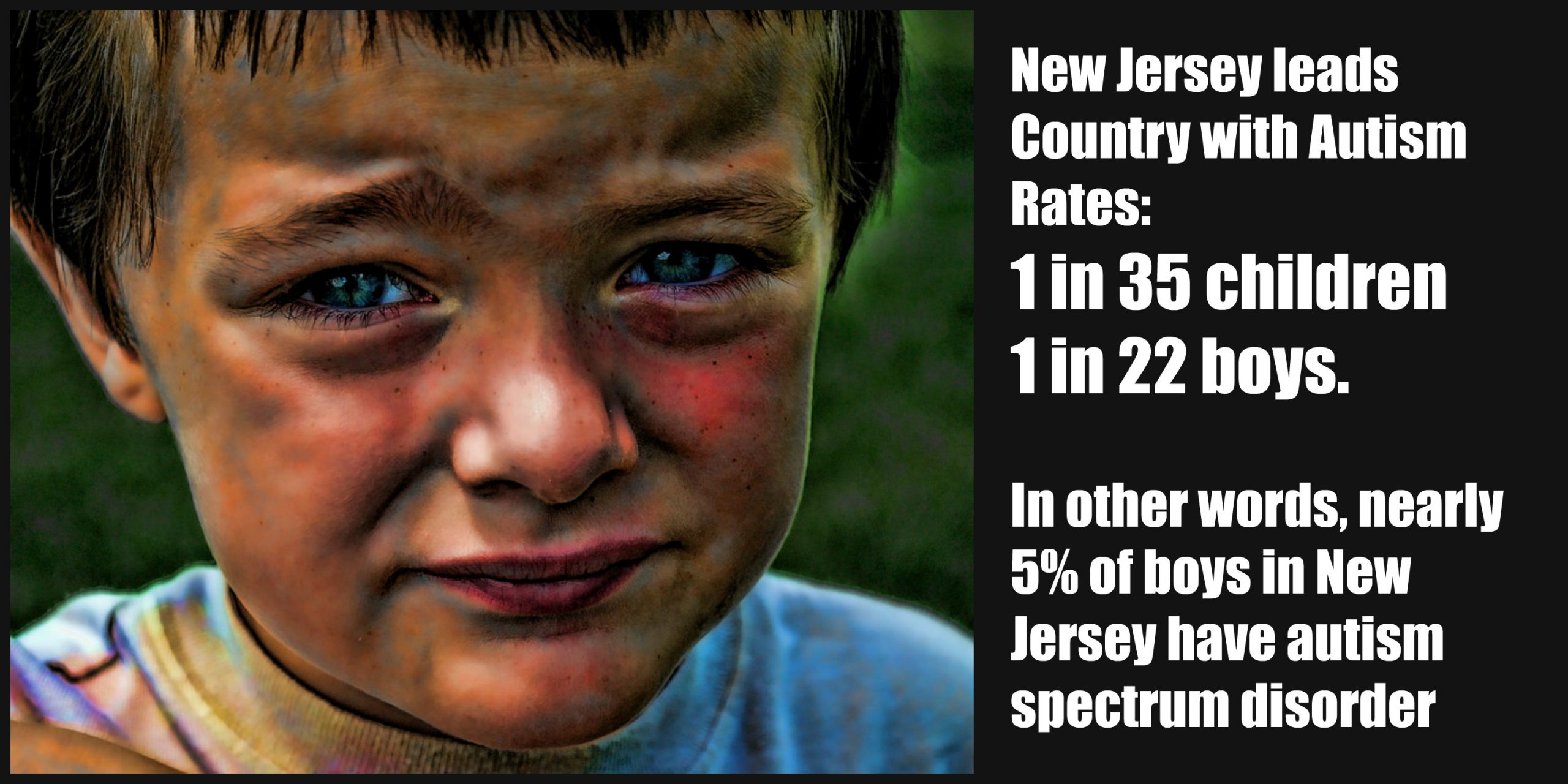 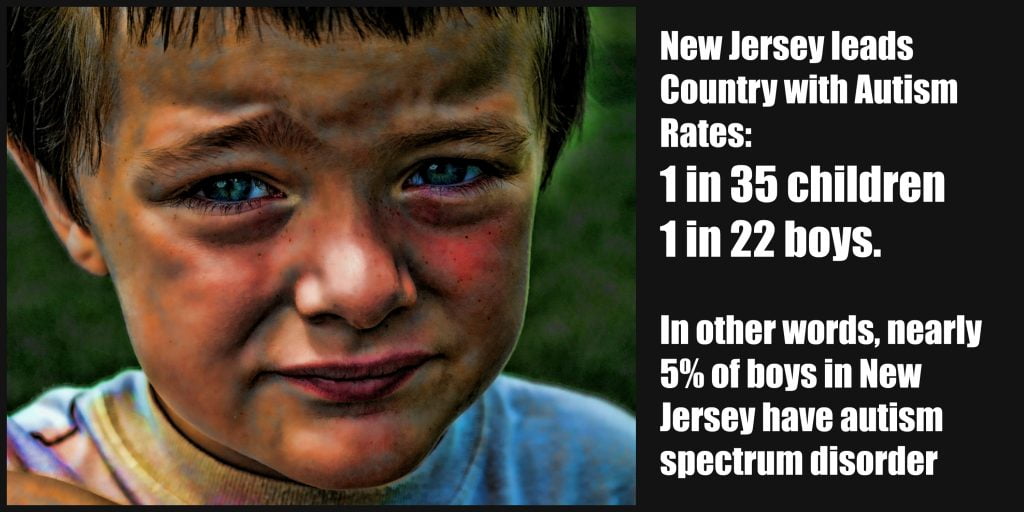 Recently, the newest U.S. autism prevalence numbers were released by the CDC.  It was not good news.  Among children born in 2004 and 2006, the prevalence of autism had increased from 1 in 68 to 1 in 59, respectively.  Leading the nation in terms of autism prevalence was New Jersey with a rate of 1 in 35 children and 1 in 22 boys.  In other words, nearly 5% of boys in New Jersey have autism spectrum disorder as defined by the new DSM V criteria. Of the children with autism in the U.S., 56% had an evaluated IQ of 85 or less, meaning they possessed intellectual disability, with the majority of those children having an IQ of less than 70.

Many in the scientific community have posited that autism is genetically determined, and researchers have searched the genome looking for the cause of this disorder.  However, the over 400 genes that have been attributed to autism risk were found to contribute to only a fraction of autism cases.  Climbing down this flimsy branch of genetics, researchers and lauding media contrived the phrase “individuals born with autism.”

Looking at prevalence alone, we are seeing a dramatic and chilling increase in numbers of autism cases, especially in the past 18 years since CDC started to officially count autism numbers in the U.S.  In 2000, the prevalence was 1 in 250, then 1 in 133 (2006) followed by 1 in 88 (2012), 1 in 68 (2014) and now 1 in 59.  Historic data also consistently show that the rate of autism in the 1980’s was near 1 in 2000 children.  It is clear that we are in an ever-increasing epidemic of this often profoundly debilitating developmental disorder, where the majority of these children will never be able to live independently throughout their lifetime.

…these wonderful kids were born normally, developed normally for the first one year to 18 months of life, and then regressed into the isolated, painful and disabling world of autism.

Let’s go back to the “individuals born with autism” phrase that I take issue with.  It is the experience of my family and many, if not most families of children with autism, that these wonderful kids were born normally, developed normally for the first one year to 18 months of life, and then regressed into the isolated, painful and disabling world of autism.  They were not born with it but experienced a significant decline in function after an environmental stressor.

Just prior to the release of the CDC’s autism prevalence numbers, an important paper by Dr. Sally Ozonoff and her colleagues at the prestigious UC Davis MIND Institute was quietly published in the journal Autism Research.  The paper, entitled “Onset Patterns in Autism: Variation across Informants, Methods, and Timing” was the culmination of a prospective study tracking the onset of autistic symptoms as evaluated by special education practitioners and parents.  This was done with the gold standard autism assessment instrument Autism Diagnostic Observation Schedule (ADOS), including assessments of frequency and quality of eye contact, shared affect, and overall social engagement by highly trained examiners.

Among those children diagnosed with autism, 88% showed a decline of function (i.e., regression) from an average to above average performance during the first assessments, as compared to those children who did not end up with an autism diagnosis.

147 infants with a family history of ASD and 83 without such a history were evaluated during 7 extensive practitioner assessments held periodically within the first three years of life.  If these children were born with autism they would have shown signs at the very beginning of life. But they did not.

Among those children diagnosed with autism, 88% showed a decline of function (i.e., regression) from an average to above average performance during the first assessments, as compared to those children who did not end up with an autism diagnosis.  In addition, the examiners saw a higher rate of regression than that reported even by parents (88% compared to 69%, respectively), using assessment instrument findings that were based on parental ratings and interviews.  Also, when retrospective instruments were used for reporting (which are hampered by recall bias), incidence of regression was roughly 40%, much lower than that seen in the arguably more accurate prospective study.

The conclusion of this research, the first of its kind, is critically important for future research and further dialogue about the role of genes vs. environment in autism causation.

Out of a sampling of 230 children followed for the first three years of their lives, fully 88% of those who were diagnosed with autism started at average and above average social engagement scores, and then regressed prior to ultimately being diagnosed with autism.  In other words, nearly all of the children followed in the study who developed autism had regressive autism. They were not born with it.