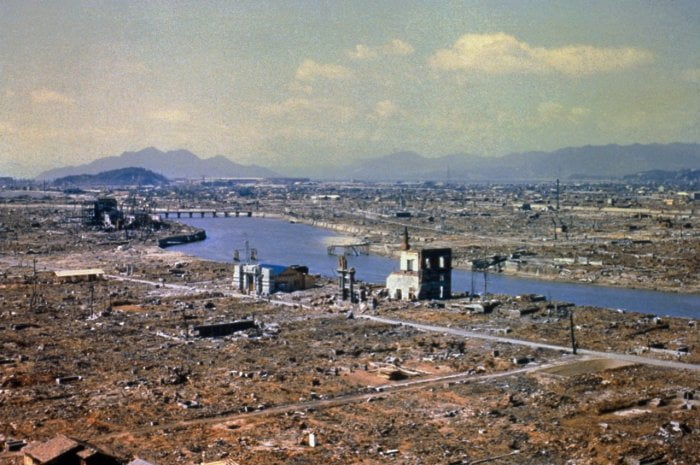 4 million to Stalin’s 2 million. The only reason we think of them as moral is because the Nazis were even far worse

There was unfortunately nothing particularly moral about the allies. The German-Japanese Axis merely made them look good by comparison

According to the best available study on the subject Germany lost 5.3 million military men to World War II. Of these, 340,000 were lost in Western Europe, 150,00 in Italy, 16,000 in Africa and up to 225,000 on the seas and in the air over Germany. Additionally the Germans lost 1,230,000 dead in the final battles in Germany of 1945, of which Overmans estimates about one third or 410,000 were inflicted by the Western Allies. Taken together the Germans lost just under 1.2 million military men to the Western Allies, chiefly the Anglo-Americans.[1]

Meanwhile in the course of the war between 360,000 to 460,000 German civilians died in the Anglo-American strategic bombing campaign against German cities and towns. For every three German soldiers the Anglo-Americans also killed one German civilian (or sometimes a forced foreign laborer or an allied prisoner of war). Nor is this the complete tally of Anglo-American bombing in WWII Europe. An estimated 60,000 civilians were killed in the bombing raids over France and just as many in Italy. 20,000 more were killed in allied bombing raids in the Low Countries.

Theoretically the campaign against German cities was “strategic”, but the raids over German-occupied territories were only “tactical”. According to the architects of Combined Bomber Offensive, civilian deaths in Germany were a positive outcome of the raids. They would diminish German morale and aid the Allied cause. On the other hand any civilian deaths caused in German-occupied countries were only tangential to what the strikes were supposed to accomplish. In practice it did not make a whole world of difference. Altogether the Anglo-American bombs took the lives of roughly 550,000 civilians across German-run Europe.

In Japan the USAAF killed 100,000 people in the March 9-10th 1945 raid on Tokyo alone, and then 120,000 people in the atomic bombing of Hiroshima and a further 60,000-80,000 in the atomic bombing of Nagasaki. Altogether the strategic bombing campaign against Japan likely killed between 400,000 and 500,000 people. Taken together, the American and British bombing campaigns over Japan and German-occupied Europe killed about 1 million non-combatants. How easily can it be argued that a force which, mainly in the space of just over a year (between mid-1944 and mid-1945), burns to death or collapses under the ruble 1 million civilians, children and women included, is a force for good?

In the course of the Second World War the Anglo-Americans actually inflicted more enemy civilian deaths than the loathed Stalin did. Around 1 million Germans and Japanese perished under Anglo-American bombs. Meanwhile the Soviets chiefly caused German civilian deaths in the expulsion of millions of Germans from parts of eastern Germany that were annexed to Communist Poland and the USSR. Nearly 500,000 of these expellees died in various circumstances.[2

Additionally, in the course of the Soviet-German conflict about 1.5 million of the Soviets’ own citizens perished as a result of Soviet state repression. Of these about 1 million in the gulag, 0.3 million from in the ethnic-based deportations of “enemy peoples” and 0.2 million executed by civilian courts, the secret police and military tribunals.

in that very same timeframe the British Empire callously presided over the deaths of about 3 million of its colonial subjects in the banal and avoidable Bengal Famine of 1943. In 1942 the weather and the Japanese capture of neighboring Burma ensured there would be some manner of food crisis in Bengal. In of themselves, however, the Japanese and a severe cyclone were not sufficient causes for the catastrophic famine that would follow.

Disaster struck when the British, sensing a crisis, intervened to secure food for the colonial administration, troops and industries in the cities, that is the sectors of society which they they deemed vital for the war effort. First they tried price controls and forced requisitions, but quickly abandoned both and instead issued local merchant companies with vast quantities of newly-printed fiat currency and authorized them to buy up as much food as humanly possible for British stocks. British policy filled up state granaries (where some of the food would end up rotting away), but drove up prices and sucked out food from the countryside. The landless peasants of Bengal could not compete with the purchasing power of the British (who could issue new currency) and were left unable to procure even enough food to keep their families nourished.[

Even once the extent of the disaster became clearly visible the British continued to export food from India as a whole and never contemplated a relief effort, though there was food enough in the Empire to continue to build-up food stocks in Britain and the eastern Mediterranean.

In the course of the Second World War both the British and the Americans on the one hand, and the Soviets on the other, carried out unjust and collectivist policies that extinguished the lives of millions of non-combatants. What is more, both sides, the Soviets and the Anglo-Americans, caused the deaths of innocents on roughly the same order of magnitude. If anything in this particular timeframe the Soviets (2 million) lagged somewhat behind the Western Allies (4 million).

Naturally, neither of them can hold a candle to Nazi Germany. In the course of World War II the Germans killed 5.7 million in the Holocaust, nearly 1 million in the Siege of Leningrad, more than half a million in anti-partisan reprisals in the Soviet Union and caused perhaps a further 7 million deaths of malnutrition and disease in the USSR. An additional 3 million Soviet prisoners of war died in German custody most of whom after being intentionally left to starve to death. Massive losses were further inflicted in occupied Yugoslavia, Poland and Greece.[4

Most shockingly the Third Reich had intended much worse than it had accomplished. Had they succeeded in rapidly conquering the European portion of the USSR, the Nazis had planned to starve tens of millions of its inhabitants in the first year of the occupation alone. German victory in World War II would have spelled the death of incomparably more people than did its defeat at the hands of the Soviets and the Anglo-Americans.

It is only natural to breathe a sigh of relief that Nazi Germany did not come out victorious from the Second World War. This, however, does not mean there was anything particularly exalted or praiseworthy about those who did come out as the victors from the global slaughter of the 1940s. They too were perfectly willing to carry out collectivist policies that were utterly contemptuous of human life and brought about the deaths of hundreds of thousands of “enemy civilians”, their own citizens and their colonial subjects in terror bombings, forced labor camps and avoidable, man-made famines.

The only saving grace of the objectively downright terrible Soviets and Anglo-Americans was that Germany under the Nazis somehow succeed in being even far worse. That is, they only looked good by comparison, but on its own their track record was also horrendous.

That is the great tragedy of the biggest armed conflict that had ever struck human kind: after so much human sacrifice and losses the victory still did not belong to morality, humanity and freedom, but to frightening state powers with the deaths of millions of innocent individual human beings on their conscience. On the one hand there was Stalin’s USSR of which little needs to be said here. On the other there were the British Empire and the United States whom in the course of World War II in terms of killing innocents and presiding over mass death taken together easily kept up with and even exceeded Stalin.

2 Ethnic Germans were also expelled from Czechoslovakia and Yugoslavia but this had comparably little to do with Moscow. An older estimate of 2.2 million deaths due to the expulsions of the Germans also exists, but since new research by German scholars such as Ingo Haar and Rüdiger Overmans this figure is no longer tenable. It has been shown the 2.2 million figure actually represents the total demographic loss of German speakers and German citizens from the affected areas. The 2.2 million figure for example presupposed there were 270,000 dead among Germans expelled from Czechoslovakia. In fact a joint German-Czech commission of historians found there were actually 15,000-30,000 such deaths. The difference is made up of categories such as the Germans from Sudentenland who died in German armed forces (160,000), the Sudetenland German victims of Nazi repression against Freemasons, Jehovah’s Witnesses and gay men, the Sudetenland Germans murdered in the Nazi euthanasia programs and so on. Ingo Haar estimates total deaths resulting from the expulsions at between 500,000 and 600,000.

3 Some 8.5 million families in Bengal owned too little land to be able to feed themselves from what they produced. They supplanted by buying food from what they earned working for wealthy landowners. For an excellent account of the famine and its context see Madhusree Mukerjee, Churchill’s Secret War: The British Empire and the Ravaging of India During World War II (New York: Basic Books, 2010). Here is my review and summary of the book.