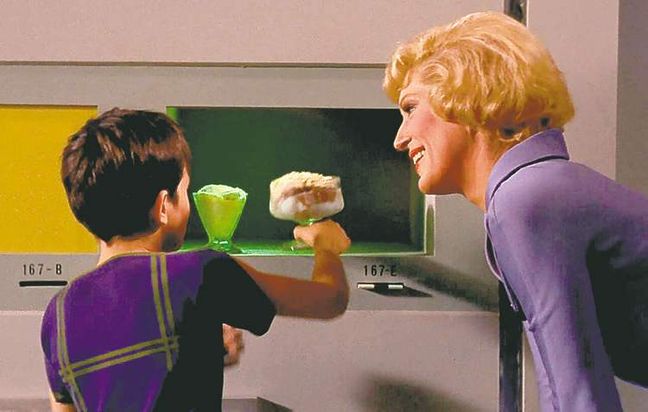 It’s a revolution in food technology that could deliver your food fantasy to your plate in less than a minute.

It’s a revolution in food technology that could deliver your food fantasy to your plate in less than a minute.

The Genie, similar in size and appearance to a coffee maker, can produce an unlimited variety of meals using pods, that contain natural dehydrated ingredients. So whether salty or sweet, an appetizer or a dessert, the device can create the food you crave in 30 seconds.

“The dish can be anything, it can be a meal like chicken with rice, like couscous with vegetable or an amazing Ramen or even a chocolate soufflé or any other desert that you want,” Carasso explains.

“We’re using only natural ingredients, we’re not using any preservatives or anything that people add to their meals,” she added.

Meals are prepared in 140 gram portions in recyclable container.

At the push of a button on Genie’s mobile application, the device begins mixing, shaking and adding any required liquids from tubes attached to the back of the compact machine which bakes or cooks the desired dish at the appropriate temperature.

The all-natural ingredients in the pods are freeze-dried and have a shelf-life of between one and two years.

Carasso and Marco conceived of the patent-registered device and pods, when they struggled to find restaurants that delivered to their office during a late night working session.

They describe the idea as a real life version of Star Trek’s ‘replicator’, a device used to synthesize meals on demand, on board the mythical starship.

While the team don’t expect the Genie to replace dining out, they say it will challenge chefs to produce a good meal in a pod, or small container.

The team say they are already working on expanding the capabilities of the mobile application and expect that in the future, Genie will cater to individual users.

“Eventually, Genie will know your microbiome and will prepare the pod for you, just for you and you will eat better, even tastier and healthier,” said 47-year-old Marco.

White Innovation, a privately owned company, hopes to first move into convenience stores and cafes and later sell the appliance to individual consumers.

Marco said Genie is only the first step in the evolution of food technology and he believes the getting a meal in a pill will be available in the not too distant future.

While Genie’s target population is primarily in western countries, Marco and Carasso say they designed the device with the hopes that it could day help those in countries that don’t have enough food too.

“In our world, we are getting fat and we are throwing away a lot of food, in their world, they don’t have any food. So if you use Genie, you can distribute the food better, you can have the shelf life much longer without the preservatives, give the people better food for them,” said Marco.

“We can even the food distribution in the world. That’s a very, very important goal for us,” he added.

Marco said they are also holding talks with the Israeli military where Genie’s pods could produce fresh, nutritious meals on demand for ground forces or aboard ships at sea.

At a tasting at Louise cafe in Ramat Hashron, in central Israel, the kitchen staff were pleasantly surprised by Genie’s chocolate soufflé.

Yossi Orbach, co-owner of Louise cafe, who recently became Genie’s sole distributor in Israel, said Genie can offer restaurant and cafe owners a way to increase the narrow profit  margins they make due to the fact that 30 percent of ingredients used in their kitchens go to waste. The meals can be prepared on demand and the size of the portions greatly limit waste.

“In a way there is a full menu,” Orbach said.  “It gives me an option to do, actually, whatever I want without any preparing,” he added.

The Genie is expected to cost several hundred U.S. dollars.  The team say the pods will be priced so they are comparable to a meal, snack or dessert.

With a string of local distributors and sales underway in Europe, Greece and the United States, Marco and Carasso say mass production will begin sooner than they expected.

It appears that Star Trek’s replicator may not have been such a far-fetched idea after all.