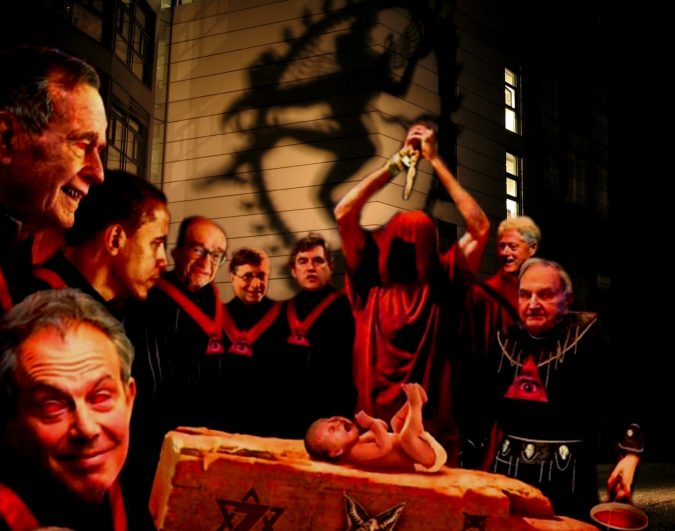 In 1989, on national TV, a courageous young woman exposed the satanic Jewish forebears of the Illuminati cult that now dominates the world.

Respected members of the community by day, they sacrifice babies at night. 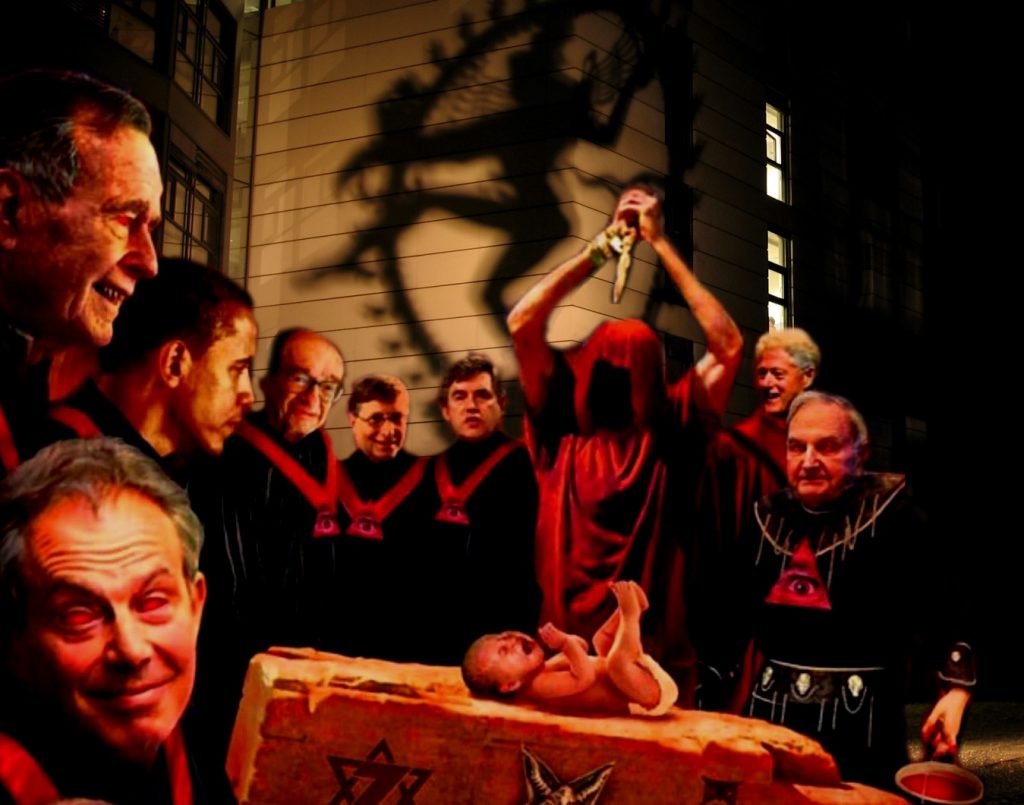 Although they appear to be upstanding citizens — lawyers, doctors, police officers etc. — they engage in Satanic ritual human sacrifice, incest and cannibalism, often in synagogues. They drink blood and eat babies.

She is describing the Illuminati which originated in the Frankist Movement in the Eighteenth Century. Jacob Frank, born Jacob Leibowitz (1726-1791) led a major Satanic heresy that shook the Jewish world. They believed that the Messiah would return if the world went over to evil completely, so they encouraged all sexual license and satanic evil as the ultimate good.

Financed by the Frankist Rothschild banking syndicate, they subverted all religions and national elites by assuming every religious and political hue. They took over Freemasonry and are now in the final stage of establishing their world government, a.k.a “globalization.”

The abuse Polin suffered is a textbook example of how Illuminati families — Jews and non-Jews — treat their children.

George W. Bush and Barack Obama may have suffered similar trauma and, (like Polin) have multiple personality disorder. Vicki is from Chicago and there is no telling how many Chicagoans surrounding Barack Obama are part of this satanic cult. Think Rahm Emanuel and Valerie Jarrett.

Polin told Oprah that she witnessed babies sacrificed and consumed for the “power” this gave. These babies are bred within the extended family for this purpose. She said she was raped several times, and elsewhere says she had five abortions due to intercourse with her father.

“I mean, to the outside world, everything we did was proper and right, and then there were the nights that things changed, that things just got turned around. What was wrong was right, and what was right was wrong. That’s what helps to create some of them to develop MPD.”

Polin’s therapist, Tina Grossman was on the show but not the YouTube. She told Oprah she had treated over 40 survivors from many states and Canada. They have never met each other yet say the “identical same things.”

Ms. GROSSMAN: They are describing identical rituals, just the same as, since I’m Jewish, you could go to New York or California and describe a seder in one state or another and, as a Jew, you would recognize it. This is the belief system in evil and the power that evil gives you, and so it has these certain rituals, so they are very similar with all of the survivors.

Ms. GROSSMAN: But before there was Christ and before there was a system of one God, there was Paganism- and it still exists in the world, and in many cultures, you still find the belief that there is strength and power in the actual consumption of human flesh or animal flesh.

In spite of the fact that both Vicki and Oprah said many times this behavior was not typical of most Jews, the B’nai B’rith-ADL attacked the show as “anti-Semitic.”

Oprah did her penance and obviously has been forgiven. Vicki was stopped on the street and told her testimony would start “another holocaust.” Vicki’s response was that denying these crimes was akin to holocaust denial. In July of 1989, she penned this statement and sent it to all concerned:

“Our society believes the myth that Jews can’t be pedophiles, or abuse their own children. This is a “MYTH, they do abuse children. There are even those who practice cannibalism and perform human sacrifices. Believe me, I saw it with my own eyes.

“I’ve come to the point in my life where I feel I need to bear witness. I have and will continue to until I’m sure what I had to endure as a child is believed by you and others like you. I will do whatever is possible so what happened to me doesn’t happen to anyone else!”

Vicki became a therapist herself, moved to Baltimore and opened “The Awareness Center” to help other victims of satanic abuse. She has articles about the Frankists on her website. I attempted to contact her without success.

But I found an extensive profile with interviews on Luke Ford’s website. There is an Affidavit from a rabbi Vicki contacted in 2004 regarding an exorcism of her cult upbringing. She described their intent to him in these terms:

“The essence of her story was that there are currently many rabbis involved in this cult who brought their satanic rituals with them to the USA from Europe. That she was born into one of the Jewish families owing allegiance to the cult.

“She claimed to have been used as part of an organized child sexual abuse ring organized by the rabbi of her synagogue, and that the sexual abuse took place on Sifrei Torah Scrolls laid out on the floor of the synagogue.

“That the abuse began in early childhood and continued over a period of many years, through her teen years and into adulthood, and that she was only one of the many young children, boys and girls used in this manner. I did not ask for specifics of the rituals but she mentioned cannibalism, defecation and the sacrilege of sacred objects.”

A friend believes that the Illuminati want power but he can’t believe they worship Satan and eat babies. I certainly wouldn’t invent such an implausible scenario.

“We must now face the harsh truth that the objectives of communism are being steadily advanced because many of us do not recognize the means used to advance them. … The individual is handicapped by coming face to face with a Conspiracy so monstrous he cannot believe it exists. The American mind simply has not come to a realization of the evil which has been introduced into our midst.” (Elks Magazine, August 1956.)

People like my friend have little knowledge of history. Does he really think over 180 million people could be massacred in the 20th century merely by accident? Hiroshima, the Holodomor, the Holocaust and 9-11 were the products of a single Satanic mindset.

Does he think the steady decline of popular culture into degeneracy and obscenity is a coincidence?

Does he think the gradual mainstreaming of incest homosexuality, pederasty, and the occult is random? Does he think the destruction of higher education (in the humanities) and the family is coincidence too?

(Forty percent of US kids were born to single mothers in 2007 compared to 4% in the 1950’s.) Mankind is in the thrall of a powerful Satanic cult intent on destroying and enslaving it.

As the therapist Grossman said, Vicki’s claims are corroborated by many others. I have reported on them in articles like “Illuminati Sex Slaves Paint Horrifying Picture;” “The Root Problem: Illuminati or Jews?”  and “Former Satanic Cult Member Exposes the Dark Illuminati Agenda.”

I have an audio interview with Mary Anne on my site which refers to human sacrifices eight times a year. Both Svali and Fritz Springmeier have described Illuminati trauma brainwashing and satanic rituals. These activities are also practiced by high-level Masons and members of intelligence agencies like MI-5 and MI-6.

Big Banks Whistleblower: I Was Told To Sacrifice Children At An Illuminati Party (minute 24:45)

As long as we deny that society has been subverted by a Satanic cult, that our leaders are dupes or agents, we won’t be able to address our predicament. As long as we smear truth tellers like Vicki Polin, we will either implicate ourselves, or continue to be accomplices in our own demise.

The logical outcome of this demented ideology is the destruction of everything we hold dear.

Obviously, society needs a major cleansing but this won’t happen as long as the levers of power are in Illuminati hands and the masses remain apathetic. Hopefully, the economic crisis will alert many more people to the danger we all face.