Prepare For Change
Home Awakening Bioelectricity And Chi – Bees Can Sense The Energy Fields Of Flowers... 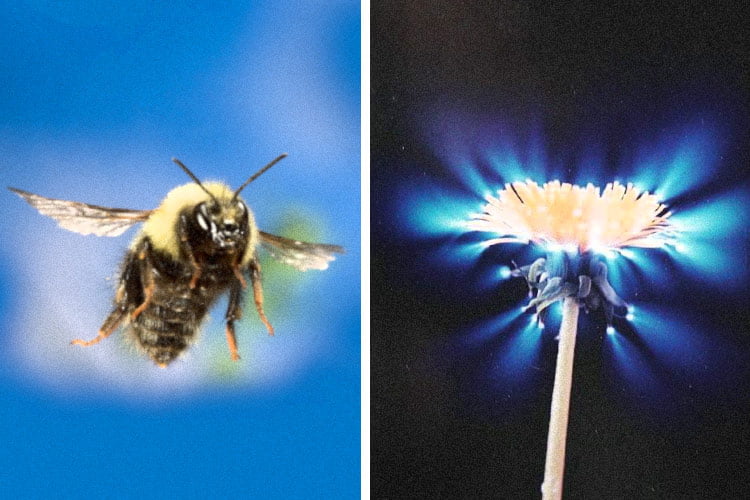 We still have so much to learn about the nature of our world and how living creatures communicate with each other. On very subtle, imperceptible levels, people, animals and even plants share information, giving us the ability to coexist. We don’t see it all or hear it all, but as technology catches up with our curiosity, we are evermore unraveling the mysteries of our inter-connectedness.

Parapsychologist and author of Science Set Free: 10 Paths to New Discovery, Rupert Sheldrake has advanced the theory of morphic resonance. In short, it’s the idea that some information lives in a natural external field beyond the brains and minds of living creatures, allowing inter-generational and non-local information to be shared amongst individual species of insects and animals.

Minds are extended beyond brains not only in space but also in time, and connect us to our own pasts through memory and to virtual futures, among which we choose… Individual and collective memory both depend on resonance, but self-resonance from an individual’s own past is more specific and hence more effective. Animal and human learning may be transmitted by morphic resonance across space and time. ~Rupert Sheldrake

Additionally, humans communicate with other humans in myriad ways beyond speech, using facial expressions, body language, breathing, and even through our ‘vibe.’ Without saying a word, we often know exactly what to make of another person, and we naturally know to trust them or not. That is, so long as we pay attention and respond to our ‘gut feelings,’ those instinctive instructions that come from below the level of thought.

Bridging the gap between the possibility of the existence of morphic fields, recent experiments into how bees perceive their world has led to the discovery that bees can actually sense the electric fields of blooming flowers, using this information to make choices that support the bees survival.

Dominic Clarke and Heather Whitney from the University of Bristol have shown that bumblebees can sense the electric field that surrounds a flower. They can even learn to distinguish between fields produced by different floral shapes, or use them to work out whether a flower has been recently visited by other bees. Flowers aren’t just visual spectacles and smelly beacons. They’re also electric billboards. ~National Geographic

For decades scientists have known that bees bump into and collide with charged particles ejected from flowers and plants, but until now, no one had asked the question of whether or not the bees were cognizant of this exchange, and if they were using it to their advantage in any way.

To their surprise, the team of scientists from the University of Bristol, led by Daniel Robert, discovered that not only are the bees somehow aware of variations in the strength of the electrical signals from flowers, but that they were actually using this information to select certain flowers in their search for food. Furthermore, they found the bees could actually perceive differences in the shapes of the flowers.

Bees can also use this electric information to bolster what their other senses are telling them. The team trained bees to discriminate between two e-flowers that came in very slightly different shades of green. They managed it, but it took them 35 visits to reach an accuracy of 80 percent. If the team added differing electric fields to the flowers, the bees hit the same benchmark within just 24 visits. ~National Geographic

They’re not yet certain of how bees actually register electric fields, but the mechanisms may be similar to other animals that sense electric fields, such as sharks.  Interestingly, the bees in turn influence the electrical fields of the flowers they come in contact with.

The bees, in turn, change the charge of whatever flower they land upon. Robert’s team showed that the electrical potential in the stem of a petunia goes up by around 25 millivolts when a bee lands upon it. This change starts just before the bee lands, which shows that it’s nothing to do with the insect physically disturbing the flower. And it lasts for just under two minutes, which is longer than the bee typically spends on its visit. ~National Geographic

To go beyond this particular discovery, the ancient study of life force energy, or chi, and the meta-physical practices of Qi Gong and yoga specifically work with the human body’s capacity to receive, store and transmit energy. Recent studies are also finally beginning to technically perceive energy meridian lines in the body, that have been a major branch of Chinese medicine for thousands of years. Master of QI Gong and author of The Roots of Chinese QI Gong: Secrets of Health, Longevity and Enlightenment, Dr. Jwing-Ming Yang believes that the term ‘bioelectricity’ best connects the Eastern and Western perspectives on the energetic makeup of living beings.

We must look at what modern Western science has discovered about bioelectromagnetic energy. Many bioelectricity related reports have been published, and frequently the results are closely related to what is experienced in Chinese Qigong training and medical science. For example, during the electrophysiological research of the 1960’s, several investigators discovered that bones are piezoelectric; that is, when they are stressed, mechanical energy is converted to electrical energy in the form of electric current. This might explain one of the practices of Marrow Washing Qigong in which the stress on the bones and muscles is increased in certain ways to increase the Qi circulation.

All living beings are connected through very sensitive and omnipresent electric and electromagnetic fields. The more closely tuned into this field we are, the more information we collect, helping us to expand our limited perceptions of the world around us, and to increase our connection with one another and with nature.

Western science has been missing this for a long time, but it’s right front of us. All the while, however, we are rushing headlong into a technological future of electromagnetic chaos, with 5G technology presenting itself as a looming catastrophe for the planet. If what we know is true, 5G and other electromagnetic pollution could be another catastrophe for bees and pollinator insects, which are already under startling duress.

What do you think? Can you perceive this electrical energy in and around your body, and should we be so cavalier in allowing technological advancement to alter and disrupt this?

This article (Bioelectricity and Chi – Bees Can Sense the Energy Fields of Flowers to Communicate With Them) originally created and published by Waking Times and is published here under a Creative Commons license with attribution to Alex Pietrowski and WakingTimes.com.