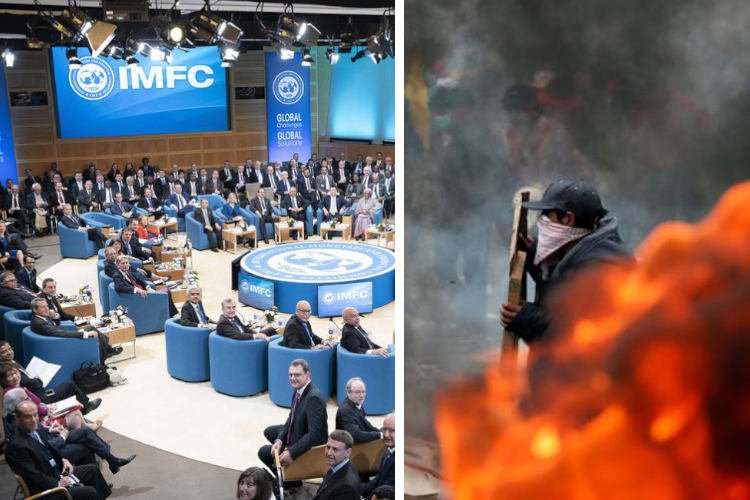 The South American nation of Ecuador has been in the throes of a bloody populist revolution for weeks now. On October 3rd, 2019, President Lenín Moreno announced the enactment of Decree 883 which effectively ended decades of government fuel subsidies, causing the price of gasoline and diesel to jump sharply overnight.

“In a televised speech on Oct. 3, Moreno announced executive order 883 which “liberates the price of diesel and extra gasoline,” justifying his decision by saying that the Ecuadorean state allocates more than US$1.3 billion a year in fuel subsidies.

A day later prices increased by 25 to 120 percent starting, as the gallon of gasoline will go from US$1.85 to US$2.30. While diesel, used by most freight transport, will increase from US$1.03 to US$2.27. A measure that was part of the US$4.2 billion deal with the International Monetary Fund.” [Source]

The following quote from Amazon Watch correctly identifies the decree as part of austerity measures related to a package loan deal from the International Monetary Fund (IMF) made in the early part of this year.

“The indigenous movement is calling on President Moreno to revoke Decree 883, which imposes draconian austerity measures on the country as a condition of a recent $4.2 billion loan from the International Monetary Fund (IMF). The measures cut subsidies on gasoline and diesel fuel, which will result in immediate and massive increases in all basic goods and services, and implemented creatively titled reforms like “wage bill realignment” and “public wage restraint” which unilaterally decimate labor rights and benefits. ~Amazon Watch

The IMF loan of $4.2 billion is really only part of a larger $10.2 billion suite of loans aimed at propping up Ecuador’s government and public debt, with funds being dispersed by the United Nations.

“The International Monetary Fund announced Wednesday that Ecuador will receive $10.2 billion in financial assistance to cover its national budget deficit and reduce pressure on the repayment of previous obligations.

In the protests, thousands have been injured and detained, as many as seven people killed, oil facilities around the nation have been besieged, and the government of president Moreno was forced to flee capital of Quito.

Ironically, today is Columbus Day, and after little hitherto western media coverage of these events, international news sources are reporting on a supposed agreement to end the protests. Celebrating it as a huge win for indigenous groups, even before details of the new decree have been made public, some sources are even reporting that Ecuador will withdraw from the $4.2 billion IMF loan.

Unfortunately, however, this isn’t how the IMF, the World Bank, the UN, the Catholic Church, and the various banks and agencies of international development work. Two weeks of social unrest are hardly a deterrent for the vanguards of neoliberalism. Just ask the people of Greece who put up a mighty fight against banker imposed austerity in 2011.

In 2015 former World Bank staffer Peter Koening labeled the World Bank a neoliberal institution and spoke out about the real and present dangers of this globalist ideology, foreshadowing the events we see in Ecuador today.

“It [Neoliberalism] finds that representative democracy has been perverted through fear, putting central political decisions in the hands of power groups with special interests.

The social impact of this process has been devastating, with a polarized income distribution, falling wages, increased precarious jobs, rising inequality, and extreme violence. Health conditions have also deteriorated and disorders associated with violence, chronic stress, and a changing nutritional culture have become dominating.” ~Peter Keoning

Professor Noam Chomsky along with several other  recently chimed in on the situation in Ecuador, identifying neoliberalism as the political philosophy responsible creating the complex and destructive dynamic we see emerging in Ecuador today.

“As we write these lines Ecuador government’s response has taken lives, injured and detained people…but protests that resist this humanitarian crisis extend in all the region,” the statement reads, referring to Colombia’s government scrapping of the peace agreement with the Revolutionary Armed Forces of Colombia (FARC), the political crisis in Peru, the exponential increase in poverty in Argentina or the deepening of inequality in Chile and Brazil.

According to the academic thinkers, this is just a result in which the “one percent” collects the “fruits of all the society with the necessary support of a dominant national elite and even those that don’t belong to the one percent.”

It is for this very reason they conclude hoping that someday “a society will be capable of building a world for all and not only for a minority chosen by a god who never chose them.” ~Noam Chomsky, et al.

Furthermore, we know how the financial organs of neoliberalism operate, in large part because of the work of John Perkins, whose 2004 book, Confessions of an Economic Hitman blew the lid off one of the greatest scams in the history of the world.

In the book, Perkins details his professional work for the Boston-based strategic consulting firm Chas T. Main. He explains a new, non-military system of conquering nations by selling corrupt leaders on loan packages that essentially puts the nation’s natural resources up as collateral for gigantic, high-interest loans that can never possibly be repaid.

The essence of the scam is that the money is effectively never even given to debtor nations because loan packages require the money to be spent on infrastructure projects carried out by development firms working directly with the IMF, the World Bank, and other international creditors. This gives globalist, neoliberal organizations a foothold to establish financial and military dominance over any nation who falls into this trap.

“We are an elite group of men and women who utilize international financial organizations to foment conditions that make other nations sub-servient to the corporatocracy running our biggest corporations, our government, and our banks. Like our counterparts in the Mafia, EHMs provide favors. These take the form of loans to develop in-frastructure — electric generating plants, highways, ports, airports, or industrial parks.

A condition of such loans is that engineering and construction companies from our own country must build all these projects. In essence, most of the money never leaves the United States; it is simply transferred from banking offices in Washington to engineering offices in New York, Houston, or San Francisco. Despite the fact that the money is returned almost immediately to corporations that are members of the corporatocracy (the credi-tor), the recipient country is required to pay it all back, principal plus interest.

If an EHM (Economic Hit Man) is completely successful, the loans are so large that the debtor is forced to default on its payments after a few years. When this happens, then like the Mafia we demand our pound of flesh. This often includes one or more of the following: control over United Nations votes, the installation of military bases, or access to precious resources such as oil or the Panama Canal. Of course, the debtor still owes us the money—and another country is added to our global empire.” ~John Perkins, Confessions of an Economic Hitman

Interestingly, in the book Perkins talks of his personal involvement in the corporate takeover of Ecuador which began with the oil boom in the 1970’s, highlighting the fact that today’s events have a long history which is not being discussed in international news.

“Because of my fellow EHMs and me, Ecuador is in far worse shape today than she was before we introduced her to the miracles of modern economics, banking, and engineering. Since 1970, during this period known euphemistically as the Oil Boom, the official poverty level grew from 50 to 70 percent, under- or unemployment increased from 15 to 70 percent, and public debt increased from $240 million to $16 billion. Meanwhile, the share of national resources allocated to the poorest segments of the population declined from 20 to 6 percent.5 Unfortunately, Ecuador is not the exception.” ~John Perkins, Confessions of an Economic Hitman

Without consideration of these inconvenient truths, understanding Ecuador’s current situation is impossible. And with all of the recent public concern over reported fires devastating wide swaths of the Amazon jungle, those who genuinely do care about the fate of this critically important global natural resource would be wise to consider the ramifications of having the United Nations and the Catholic Church appear as impartial arbiters of justice.

If you were to visit the country today, you would see one of the world’s most biologically diverse and beautiful areas under total domination by oil development, Chinese road and dam developments, mining interests, and logging on an epic scale, all accompanied by poverty and a clear agenda to colonize and subjugate any remaining indigenous holdouts. You would also see modern offices and massive Catholic churches built directly on top of Inca ruins, direct reminders of the brutal conquest of South America’s indigenous cultures by Catholicism. Note the rock wall below the modern buildings, which dates back to Pre-Columbian times.

Sadly, the people of Ecuador are being duped by a crooked government who who will do anything to survive a revolution. If the resistors fall for it now, it is almost certain that the president will unveil a deal which somehow undermines their sovereignty ever more, while allowing globalist corporate interests even greater access to Ecuador’s priceless forests and resources.