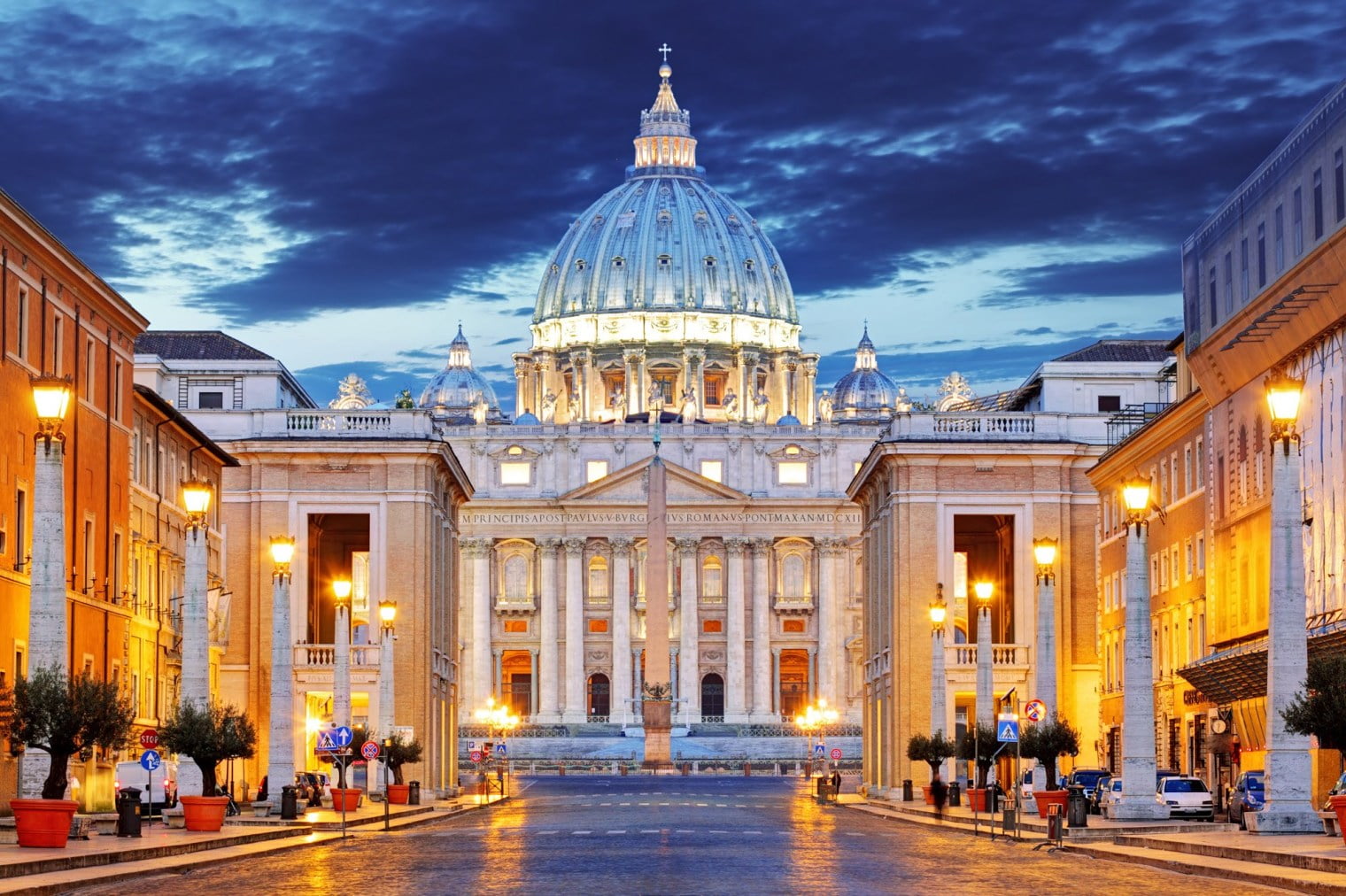 The Catholic Church has traditionally understood itself to be the new Israel (Catechism of the Catholic Church 877). Just as Israel was God’s people in the Old Testament, the Church is his people now, and to many in our culture, this sounds extremely arrogant and possibly even anti-Semitic. It seems like we’re saying that God has rejected the Jews and chosen a new people to replace them. However, that couldn’t be further from the truth.

With St. Paul, the Church affirms that God has not rejected his people from the Old Testament (Romans 11:1-2), and the way we understand our position as the new Israel involves a lot more nuance than simply saying that the Church has replaced the Jews in God’s eyes. So what exactly does this mean? How exactly can we say that we are the new Israel without disparaging the “old” Israel?

New priests lie in front of Pope Benedict XVI (L) during a mass for the ordination of new priests at St. Peter Basilica at the Vatican. AFP PHOTO / VINCENZO PINTO

To begin, let’s go back to the Old Testament and see what the prophets said Israel would be like once the Messiah came:

“Yea, at that time I will change the speech of the peoples
to a pure speech, that all of them may call on the name of the Lord
and serve him with one accord.

From beyond the rivers of Ethiopia my suppliants, the daughter of my dispersed ones,
shall bring my offering.” (Zephaniah 3:9-10)

Many peoples and strong nations shall come to seek the Lord of hosts in Jerusalem, and to entreat the favor of the Lord. Thus says the Lord of hosts: In those days ten men from the nations of every tongue shall take hold of the robe of a Jew, saying, ‘Let us go with you, for we have heard that God is with you.’” (Zechariah 8:20-23)

From these texts, we can see that even though God may have separated the Israelites from their neighbors in the past (Leviticus 20:26), he did not want them to remain that way forever. No, his ultimate goal was for the rest of the world to one day join them and become part of his people too. He wanted Israel to grow to encompass the entire human race and become a multi-ethnic and multi-national family that worshipped him and lived in accordance with his law.

And today, we call that family the Church. As St. Paul explains, Israel is like a tree. The Jews of Jesus’ day, as ethnic Israelites, were all natural branches in this tree, and any Gentiles (non-Jews) who join the Church are like branches that are cut off from other trees and grafted into Israel. On the flipside, the Jews who rejected Jesus were cut off from their own family tree (Romans 11:17-24).

As a result, we can see that the Church doesn’t simply replace Israel; rather, in a very real sense, the Church is Israel.

It is the multi-ethnic and multi-national family made up of both Jews and Gentiles that the Old Testament prophets always said Israel would one day become.

But we have to tread carefully here. As I said, the Jews who rejected Jesus were cut off from the “tree” of Israel, and this can still sound anti-Semitic if we don’t understand their history in the Bible.

The Weaponizing Of A Racial Perception

It Was Here and then Where Rothschild Employee Vladimir Lenin Painted The Wall Of Anti-Semitism For Rothschild (Poster Boy For The Banking Cabal) To Hide Behind. This was the backdoor for Rothschild To Expand Control Into The Middle East while exploiting the Christian population of Russia through centralizing their wealth to his foundry. Russia Reopens Criminal Case Into The Murder Of Tsar Nicholas II And His Family As Part Of A ‘Zionist Ritual Murder’

Rothschild’s zionist Lenin! Rothschild Cabal Hired Marx to craft a social political scheme [Marxism aka Communism, aka Sovietism, aka Socialism, aka Rothschildism] to ‘centralize’ a nation’s wealth to the coffers of the BOE Rothschild’s Bank Of England.
Vladimir Lenin was the first goon used by Rothschild to usurp Russia and rename it the USSR.
Gorbachev the last Soviet/Rothschild goon was removed from office On Christmas Day 1991.
Gorbachev was in office for about as long as the over thrown Rothschild President in Egypt who now is in prison facing murder charges against the people.
The U.S. media made a hero out this piece of shit who is in the U.S. implementing Agenda 21 with Nancy Pelosi in the background.

The Old Testament, the Scriptures of the Israelites themselves, is essentially the story of their continual disobedience and rebellion against God. Time and time again, they rejected God’s laws and went after other deities, and it eventually got so bad that God told a large portion of them, “[Y]ou are not my people and I am not your God” (Hosea 1:9). Then, in the very next verse, he promised to eventually save them and make them his people once again at some point in the future (Hosea 1:10).

This tells us that God always loves and cares for Israel, but large portions of the nation can cut themselves off from him and become, in a very real sense, no longer his people. And that’s exactly what happened during the time of Jesus.

The majority of Jews rejected him, so they cut themselves off from God. As a result, when we say that they were no longer his people, we are saying nothing that the Old Testament, the Scriptures of Israel, didn’t already say. We are being no more anti-Semitic than Hosea or any of the other prophets of ancient Israel.

Furthermore, along with the Old Testament, the Church also affirms that God still loves those Israelites who have been cut off from his people. Just as Hosea said that God would one day rescue his wayward children, so too do we affirm that the Jews even to this day are still “beloved for the sake of their forefathers. For the gifts and the call of God are irrevocable” (Romans 11:28-29; see Nostra Aetate 4).

Given that the Church truly is Israel, what practical consequences does this have for our spiritual lives? What difference does it make that we are God’s people just like the ethnic Israelites were in the Old Testament?

In a nutshell, it means that we have inherited the vocation of ancient Israel. In the Old Testament, God said that he chose Israel to be his “own possession among all peoples…me a kingdom of priests and a holy nation” (Exodus 19:5-6). Now, this description of Israel’s vocation may seem rather opaque to us 21st century Americans, but it would have made perfect sense to its original audience.

The key is that the Israelites were supposed to be God’s priests in the midst of the nations. We normally think of priests as people who celebrate Mass and run parishes, but the office is actually much broader than that. A priest is essentially someone who mediates between God and humanity.  He stands before God as a representative of the people and before the people as a representative of God.

More specifically, in ancient Israel, priests taught the people God’s laws (Leviticus 10:11) and blessed them (Numbers 6:22-27), so that’s what the Israelites were supposed to do.  They were supposed to teach the surrounding nations God’s laws and impart His blessing to them. In other words, they were supposed to evangelize the rest of mankind and bring them back to the worship of the one true God.

And as the new Israel, we now have this same vocation. In fact, the New Testament describes the Church in a way that calls to mind what God said about Israel in Exodus: “But you are a chosen race, a royal priesthood, a holy nation, God’s own people, that you may declare the wonderful deeds of him who called you out of darkness into his marvelous light” (1 Peter 2:9).

Just as Israel was God’s “own possession…a kingdom of priests and a holy nation,” so too is the Church “a royal priesthood, a holy nation, God’s own people.”

Furthermore, this verse even tells us what this means: just like the Israelites in the Old Testament, Christians today are God’s priests in the midst of the human race in order to “declare the wonderful deeds” of God. We’re supposed to evangelize the rest of mankind and bring them back to the worship of the one true God.

A Viking ~ A Catholic ~ Saint Vladimir The Founder Of Russia.

Now, this doesn’t mean that we all have to become professional missionaries and go to faraway lands preaching to people who have never heard about Jesus before. Some people are called to do that, but most of us are called to spread the Gospel in much less dramatic ways. We are supposed to evangelize however we can, using whatever opportunities God gives us. Sometimes that simply means showing our faith through our loving actions, and sometimes that means having to speak up and explain or defend the faith when people ask questions or bash the Church.

Simply put, we all have to prudently discern how we can best spread the Gospel and bring others to Christ, thereby fulfilling our vocation as the new Israel to be God’s priestly people among the nations.