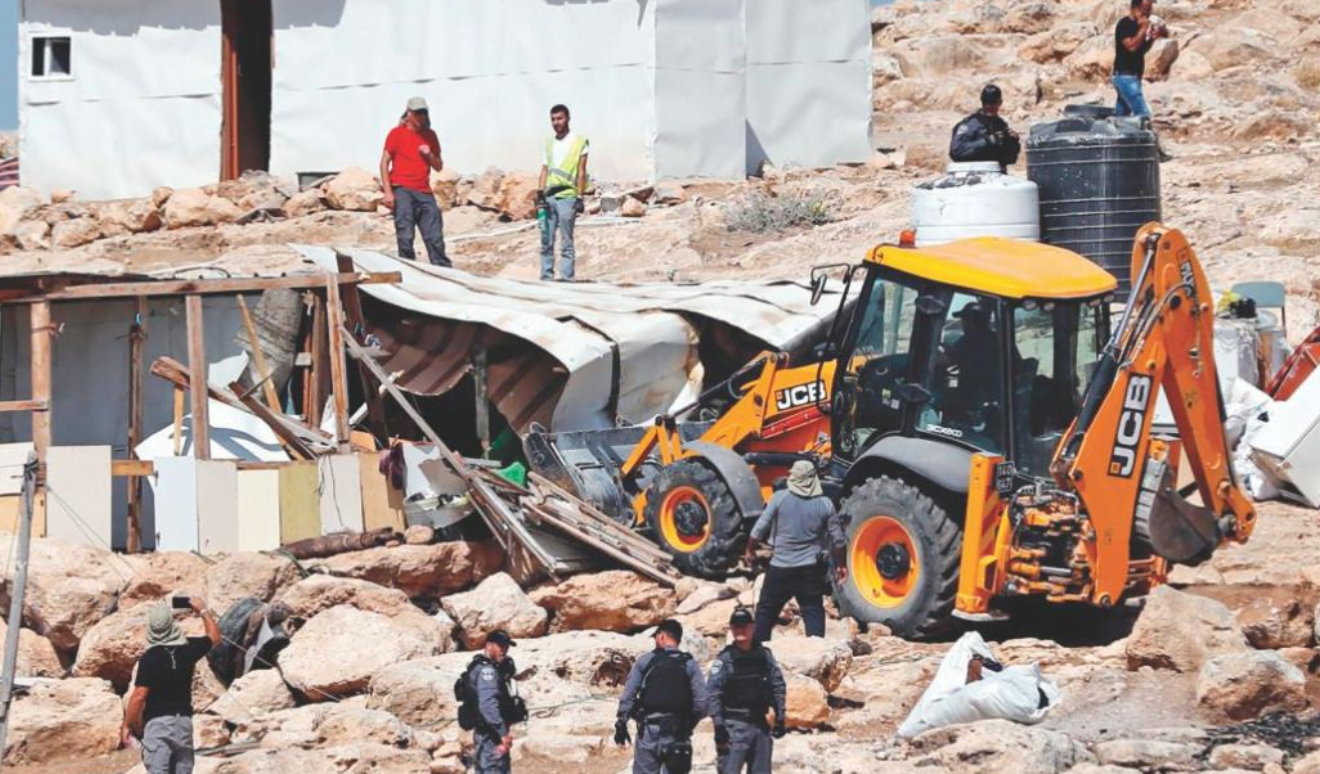 Tens of thousands are to be driven out of their homes because their numbers pose a major demographic threat to a Jewish state. The decades-long struggle by tens of thousands of Israelis against being uprooted from their homes – some for the second or third time – should be proof enough that Israel is not the western-style liberal democracy it claims to be.

Last month 36,000 Bedouin – all of them Israeli citizens – discovered that their state is about to make them refugees in their own country, driving them into holding camps. These Israelis, it seems, are the wrong kind.

Their treatment has painful echoes of the past. In 1948, 750,000 Palestinians were expelled by the Israeli army outside the borders of the newly declared Jewish state established on their homeland – what the Palestinians call their Nakba, or catastrophe.

Israel is regularly criticised for its belligerent occupation, its relentless expansion of illegal settlements on Palestinian land and its repeated and savage military attacks, especially on Gaza.

On rare occasions, analysts also notice Israel’s systematic discrimination against the 1.8 million Palestinians whose ancestors survived the Nakba and live inside Israel, ostensibly as citizens.

But each of these abuses is dealt with in isolation, as though unrelated, rather than as different facets of an overarching project. A pattern is discernible, one driven by an ideology that dehumanises Palestinians everywhere Israel encounters them.

That ideology has a name. Zionism provides the thread that connects the past – the Nakba – with Israel’s current ethnic cleansing of Palestinians from their homes in the occupied West Bank and East Jerusalem, the destruction of Gaza, and the state’s concerted efforts to drive Palestinian citizens of Israel out of what is left of their historic lands and into ghettoes.

The logic of Zionism, even if its more naive supporters fail to grasp it, is to replace Palestinians with Jews – what Israel officially terms Judaisation.

The Palestinians’ suffering is not some unfortunate side effect of conflict. It is the very aim of Zionism: to incentivise Palestinians still in place to leave “voluntarily”, to escape further suffocation and misery.

The starkest example of this people replacement strategy is Israel’s long-standing treatment of 250,000 Bedouin who formally have citizenship.

The Bedouin are the poorest group in Israel, living in isolated communities mainly in the vast, semi-arid area of the Negev, the country’s south. Largely out of view, Israel has had a relatively free hand in its efforts to “replace” them.

That was why, for a decade after it had supposedly finished its 1948 ethnic cleansing operations and won recognition in western capitals, Israel continued secretly expelling thousands of Bedouin outside its borders, despite their claim on citizenship.

Meanwhile, other Bedouin in Israel were forced off their ancestral lands to be driven either into confined holding areas or state-planned townships that became the most deprived communities in Israel.

It is hard to cast the Bedouin, simple farmers and pastoralists, as a security threat, as was done with the Palestinians under occupation.

But Israel has a much broader definition of security than simple physical safety. Its security is premised on the maintenance of an absolute demographic dominance by Jews.

The Bedouin may be peaceable but their numbers pose a major demographic threat and their pastoral way of life obstructs the fate intended for them – penning them up tightly inside ghettoes.

Most of the Bedouin have title deeds to their lands that long predate Israel’s creation. But Israel has refused to honour these claims and many tens of thousands have been criminalised by the state, their villages denied legal recognition.

For decades they have been forced to live in tin shacks or tents because the authorities refuse to approve proper homes and they are denied public services like schools, water and electricity.

The Bedouin have one option if they wish to live within the law: they must abandon their ancestral lands and their way of life to relocate to one of the poor townships.

Many of the Bedouin have resisted, clinging on to their historic lands despite the dire conditions imposed on them.

One such unrecognised village, Al Araqib, has been used to set an example. Israeli forces have demolished the makeshift homes there more than 160 times in less than a decade. In August, an Israeli court approved the state billing six of the villagers £285,000 ($370,000) for the repeated evictions.

Al Araqib’s 70-year-old leader, Sheikh Sayah Abu Madhim, recently spent months in jail after his conviction for trespassing, even though his tent is a stone’s throw from the cemetery where his ancestors are buried.

Now the Israel authorities are losing patience with the Bedouin.

Last January, plans were unveiled for the urgent and forcible eviction of nearly 40,000 Bedouin from their homes in unrecognised villages under the guise of “economic development” projects. It will be the largest expulsion in decades.

“Development”, like “security”, has a different connotation in Israel. It really means Jewish development or Judaisation – not development for Palestinians.

The projects include a new highway, a high-voltage power line, a weapons testing facility, a military live-fire zone and a phosphate mine.

It was revealed last week that the families would be forced into displacement centres in the townships, living in temporary accommodation for years as their ultimate fate is decided. Already these sites are being compared to the refugee camps established for Palestinians in the wake of the Nakba.

The barely concealed aim is to impose on the Bedouin such awful conditions that they will eventually agree to be confined for good in the townships on Israel’s terms.

Six leading United Nations human rights experts sent a letter to Israel in the summer protesting the grave violations of the Bedouin families’ rights in international law and arguing that alternative approaches were possible.

Adalah, a legal group for Palestinians in Israel, notes that Israel has been forcibly evicting the Bedouin over seven decades, treating them not as human beings but as pawns in its never-ending battle to replace them with Jewish settlers.

The Bedouin’s living space has endlessly shrunk and their way of life has been crushed.

This contrasts starkly with the rapid expansion of Jewish towns and single-family farming ranches on the land from which the Bedouin are being evicted.

It is hard not to conclude that what is taking place is an administrative version of the ethnic cleansing Israeli officials conduct more flagrantly in the occupied territories on so-called security grounds.

Jonathan Cook is an award-winning British journalist based in Nazareth, Israel, since 2001. He is the author of three books on the Israeli-Palestinian conflict and his reports and commentaries have appeared in the national print press such as the Guardian, the Observer and the Times.