Prepare For Change
Home Awakening Next Gen Farming Without Soil and 90% Less Water ( You can... 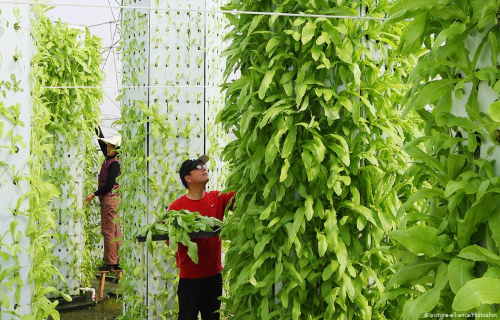 Vertical farming with Tower Gardens is on the ‘rise’ and rightfully so. You can grow a variety of plants without ANY soil and 90% LESS water. It also requires 10x less space so you can do a lot more in a smaller area. That means easily growing fresh herbs, fruits, vegetables, and flowers both indoors and out. And because everything is grown and picked fresh, the flavor is unbelievable!

What Is Vertical Farming?

Vertical farming is the practice of producing food on vertically inclined surfaces. Instead of farming vegetables and other foods on a single level, such as in a field or a greenhouse, this method produces foods in vertically stacked layers commonly integrated into other structures like a skyscraper, shipping container or repurposed warehouse.

Firstly, the primary goal of vertical farming is producing more foods per square meter. To accomplish this goal, crops are cultivated in stacked layers in a tower life structure. Secondly, a perfect combination of natural and artificial lights is used to maintain the perfect light level in the room. Technologies such as rotating beds are used to improve lighting efficiency.

Advantages and Disadvantages of Vertical Farming
Vertical farming has a lot of promise and sounds like the farm of the future. However, there are a few stumbling blocks to consider before rushing full-speed ahead into vertical farming.

Advantages
It offers a plan to handle future food demands

It allows crops to grow year-round

More organic crops can be grown

There is less exposure to chemicals and disease

Pollination would be very difficult and costly

It would involve higher labor costs

Preparation for Future: By 2050, around 80 percent of the world population is expected to live in urban areas, and the growing population will lead to an increased demand for food. The efficient use of vertical farming may perhaps play a significant role in preparing for such a challenge.
Increased And Year-Round Crop Production: Vertical farming allows us to produce more crops from the same square footage of growing area. In fact, 1 acre of an indoor area offers equivalent production to at least 4-6 acres of outdoor capacity. According to an independent estimate, a 30-story building with a basal area of 5 acres can potentially produce an equivalent of 2,400 acres of conventional horizontal farming. Additionally, year-round crop production is possible in a controlled indoor environment which is completely controlled by vertical farming technologies.
Less Use Of Water In Cultivation: Vertical farming allows us to produce crops with 70-95 percent less water than required for normal cultivation.
Not Affected By Unfavorable Weather Conditions: Crops in a field can be adversely affected by natural calamities such as torrential rains, cyclones, flooding or severe droughts—events which are becoming increasingly common as a result of global warming. Indoor vertical farms are less likely to feel the brunt of the unfavorable weather, providing greater certainty of harvest output throughout the year.
Increased Production of Organic Crops: As crops are produced in a well-controlled indoor environment without the use of chemical pesticides, vertical farming allows us to grow pesticide-free and organic crops.

Human and Environmentally Friendly: Indoor vertical farming can significantly lessen the occupational hazards associated with traditional farming. Farmers are not exposed to hazards related to heavy farming equipment, diseases like malaria, poisonous chemicals and so on. As it does not disturb animals and trees inland areas, it is good for biodiversity as well.

No Established Economics: The financial feasibility of this new farming method remains uncertain. The cost of building skyscrapers for farming, combined with other costs such as lighting, heating, and labor, can easily outweigh the benefits we can get from the output of vertical farming. For a 60 hectare vertical farm, the building cost can be well over $100 million. And while vertical farms will be attractive to locate close to cities, the high price of real estate will impede the financial viability of urban locations. The financial situation is changing, however, as the industry matures and technologies improve. For example, New Jersey-based indoor-farming startup Bowery announced in December 2018 that it had raised $90 million in fresh funding. In 2017, Plenty, a West Coast vertical grower, announced a $200 million investment from Softbank.
Difficulties with Pollination: Vertical farming takes place in a controlled environment without the presence of insects. As such, the pollination process needs to be done manually, which will be labor intensive and costly.
Labor Costs: As high as energy costs are in vertical farming, labor costs can be even higher due to their concentration in urban centers where wages are higher, as well as the need for more skilled labor. Automation in vertical farms, however, may lead to the need for fewer workers. Manual pollination may become one of the more labor-intensive functions in vertical farms. Over the next 10 years, vertical farming may generate 100,000 U.S. jobs.

Too Much Dependency on Technology: The development of better technologies can always increase efficiency and lessen costs. But the entire vertical farming is extremely dependent on various technologies for lighting, maintaining temperature, and humidity. Losing power for just a single day can prove very costly for a vertical farm. Many believe the technologies in use today are not ready for mass adoption.

Vertical Farming in the United States
The vertical farming sector is growing rapidly in the U.S., at a CAGR of more than 24% between 2018-2024, when it is expected to reach $3 billion annually. By comparison, the total U.S. fresh fruit and vegetable industry is currently worth over $104 billion. According to one account, “Shoppers can now find produce grown indoors by more than 23 large vertical farms in more than 20 supermarket chains in nearly every major metropolitan area in the country.”

The industry remains highly leveraged, however, sparking concerns for its viability, when survival depends on expansion, and expansion is so capital intensive. According to the same source, “While industry leaders say scaling offers the best hope for profitability in this business, many vertical farms have encountered problems when they began planning to add additional production facilities.”

Would you like to see a garden that needs no watering, no digging, no fertilizing, no weeding and produces fresh, organic food on auto-pilot, year after year? One that can yield up to 8 times more produce than traditional gardens1, to feed you and your family in times of crisis with some of the healthiest, tastiest, most nutritious food you could possibly eat… and it can fit right in your back yard.

This amazing food farm works under some of the most extreme weather conditions, in places such as the Jordanian Desert, South Africa, China, Australia and in every corner of the United States, including Alaska.

Because of the brilliant way in which it is designed, this survival garden is completely hidden in plain sight from nosy neighbors and the hungry looters that will roam the streets post-collapse in search for food. NO ONE will ever figure out that you have an endless supply of food right in your backyard.

In this pocket-sized Paradise, fruit trees, veggies and medicinal plants all live together in perfect harmony… taking care of each-other… surviving and thriving the way they did for hundreds of thousands of years: without human intervention.

A permaculture garden or farm is truly a slice of Heaven: flowers, veggies, fruit trees, bees, insects, worms, tiny microorganisms, weeds and even backyard animals are all part of this perfect ecosystem that thrives under one condition: that you don’t mess with it.

I’m talking about beans, potatoes, carrots, spinach, squash, berries… and hundreds of other plants and fruit trees… all on auto-pilot, all regenerative.

This special type of garden can feed yourself and your family in times of crisis and is actually healthier than gardening and is perfect for survival purposes. It is called permaculture and it’s a method of replicating nature’s way of growing food with little effort in your own back yard.

Me and my two gardening experts created the only true survival gardening course on the market, that will ensure you always have a “stockpile”…