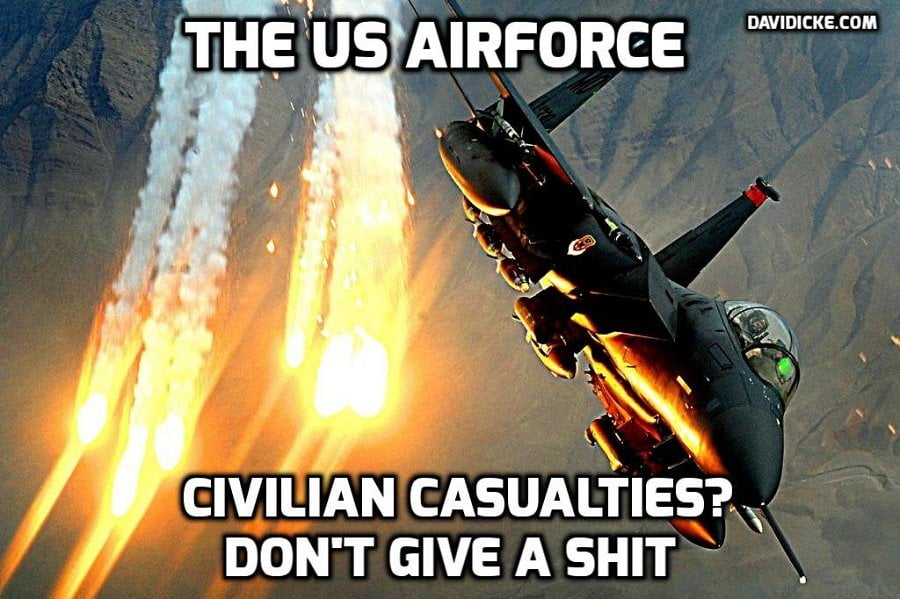 “Let us resolve that never again will we send the precious young blood of this country to die trying to prop up a corrupt military dictatorship abroad. This is also the time to turn away from excessive preoccupation overseas to the rebuilding of our own nation. America must be restored to a proper role in the world. But we can do that only through the recovery of confidence in ourselves…. together we will call America home to the ideals that nourished us from the beginning. From secrecy and deception in high places; come home, America. From military spending so wasteful that it weakens our nation; come home, America.”—George S. McGovern, former Senator and presidential candidate

I agree wholeheartedly with George S. McGovern, a former Senator and presidential candidate who opposed the Vietnam War, about one thing: I’m sick of old men dreaming up wars for young men to die in.

That’s not what’s going to happen, of course.

The U.S. military reportedly has more than 1.3 million men and women on active duty, with more than 200,000 of them stationed overseas in nearly every country in the world. Those numbers are likely significantly higher in keeping with the Pentagon’s policy of not fully disclosing where and how many troops are deployed for the sake of “operational security and denying the enemy any advantage.” As investigative journalist David Vine explains, “Although few Americans realize it, the United States likely has more bases in foreign lands than any other people, nation, or empire in history.”

Don’t fall for the propaganda, though: America’s military forces aren’t being deployed abroad to protect our freedoms here at home. Rather, they’re being used to guard oil fields, build foreign infrastructure and protect the financial interests of the corporate elite. In fact, the United States military spends about $81 billion a year just to protect oil supplies around the world.

The reach of America’s military empire includes close to 800 bases in as many as 160 countries, operated at a cost of more than $156 billion annually. As Vine reports, “Even US military resorts and recreation areas in places like the Bavarian Alps and Seoul, South Korea, are bases of a kind. Worldwide, the military runs more than 170 golf courses.”

This is how a military empire occupies the globe.

Already, American military servicepeople are being deployed to far-flung places in the Middle East and elsewhere in anticipation of the war drums being sounded over Iran.

This Iran crisis, salivated over by the neocons since prior to the Iraq War and manufactured by war hawks who want to jumpstart the next world war, has been a long time coming.

Donald Trump, Barack Obama, George W. Bush, Bill Clinton: they all have done their part to ensure that the military industrial complex can continue to get rich at taxpayer expense.

Despite numerous campaign promises to stop America’s “endless wars,” once elected, Trump has done a complete about-face, deploying greater numbers of troops to the Middle East, ramping up the war rhetoric, and padding the pockets of defense contractors. Indeed, Trump is even refusing to withdraw U.S. troops from Iraq in the face of a request from the Iraqi government for us to leave.

Obama was no different: he also pledged—if elected—to bring the troops home from Iraq and Afghanistan and reduce America’s oversized, and overly costly, military footprint in the world. Of course, that didn’t happen.

Yet while the rationale may keep changing for why American military forces are policing the globe, these wars abroad (in Iraq, Afghanistan, Pakistan, Syria, Yemen and now Iran) aren’t making America—or the rest of the world—any safer, are certainly not making America great again, and are undeniably digging the U.S. deeper into debt.

Although the U.S. constitutes only 5% of the world’s population, America boasts almost 50% of the world’s total military expenditure, spending more on the military than the next 19 biggest spending nations combined.

In fact, the Pentagon spends more on war than all 50 states combined spend on health, education, welfare, and safety.

The American military-industrial complex has erected an empire unsurpassed in history in its breadth and scope, one dedicated to conducting perpetual warfare throughout the earth.

Since 2001, the U.S. government has spent more than $4.7 trillion waging its endless wars.

Having been co-opted by greedy defense contractors, corrupt politicians and incompetent government officials, America’s expanding military empire is bleeding the country dry at a rate of more than $32 million per hour.

In fact, the U.S. government has spent more money every five seconds in Iraq than the average American earns in a year.

Future wars and military exercises waged around the globe are expected to push the total bill upwards of $12 trillion by 2053.

Talk about fiscally irresponsible: the U.S. government is spending money it doesn’t have on a military empire it can’t afford.

As investigative journalist Uri Friedman puts it, for more than 15 years now, the United States has been fighting terrorism with a credit card, “essentially bankrolling the wars with debt, in the form of purchases of U.S. Treasury bonds by U.S.-based entities like pension funds and state and local governments, and by countries like China and Japan.”

War is not cheap, but it becomes outrageously costly when you factor in government incompetence, fraud, and greedy contractors. Indeed, a leading accounting firm concluded that one of the Pentagon’s largest agencies “can’t account for hundreds of millions of dollars’ worth of spending.”

Unfortunately, the outlook isn’t much better for the spending that can be tracked.

A government audit found that defense contractor Boeing has been massively overcharging taxpayers for mundane parts, resulting in tens of millions of dollars in overspending. As the report noted, the American taxpayer paid:

That price gouging has become an accepted form of corruption within the American military empire is a sad statement on how little control “we the people” have over our runaway government.

Americans have thus far allowed themselves to be spoon-fed a steady diet of pro-war propaganda that keeps them content to wave flags with patriotic fervor and less inclined to look too closely at the mounting body counts, the ruined lives, the ravaged countries, the blowback arising from ill-advised targeted-drone killings and bombing campaigns in foreign lands, or the transformation of our own homeland into a warzone.

That needs to change.

The U.S. government is not making the world any safer. It’s making the world more dangerous. It is estimated that the U.S. military drops a bomb somewhere in the world every 12 minutes. Since 9/11, the United States government has directly contributed to the deaths of around 500,000 human beings. Every one of those deaths was paid for with taxpayer funds.

The U.S. government is not making America any safer. It’s exposing American citizens to alarming levels of blowback, a CIA term referring to the unintended consequences of the U.S. government’s international activities. Chalmers Johnson, a former CIA consultant, repeatedly warned that America’s use of its military to gain power over the global economy would result in devastating blowback.

The assassination of Iranian General Qasem Soleimani by a U.S. military drone strike will, I fear, spur yet more blowback against the American people.

James Madison was right: “No nation could preserve its freedom in the midst of continual warfare.” As Madison explained, “Of all the enemies to public liberty war is, perhaps, the most to be dreaded because it comprises and develops the germ of every other. War is the parent of armies; from these proceed debts and taxes… known instruments for bringing the many under the domination of the few.”

We are seeing this play out before our eyes.

The government is destabilizing the economy, destroying the national infrastructure through neglect and a lack of resources, and turning taxpayer dollars into blood money with its endless wars, drone strikes and mounting death tolls.

Clearly, our national priorities are in desperate need of an overhauling.

At the height of its power, even the mighty Roman Empire could not stare down a collapsing economy and a burgeoning military. Prolonged periods of war and false economic prosperity largely led to its demise. As historian Chalmers Johnson predicts:

The fate of previous democratic empires suggests that such a conflict is unsustainable and will be resolved in one of two ways. Rome attempted to keep its empire and lost its democracy. Britain chose to remain democratic and in the process let go its empire. Intentionally or not, the people of the United States already are well embarked upon the course of non-democratic empire.

This is the “unwarranted influence, whether sought or unsought, by the military-industrial complex” that President Dwight Eisenhower warned us more than 50 years ago not to let endanger our liberties or democratic processes.

Eisenhower, who served as Supreme Commander of the Allied forces in Europe during World War II, was alarmed by the rise of the profit-driven war machine that emerged following the war—one that, in order to perpetuate itself, would have to keep waging war.

We failed to heed his warning.

As I make clear in my book Battlefield America: The War on the American People, there’s not much time left before we reach the zero hour.

It’s time to stop policing the globe, end these wars-without-end, and bring the troops home before it’s too late.