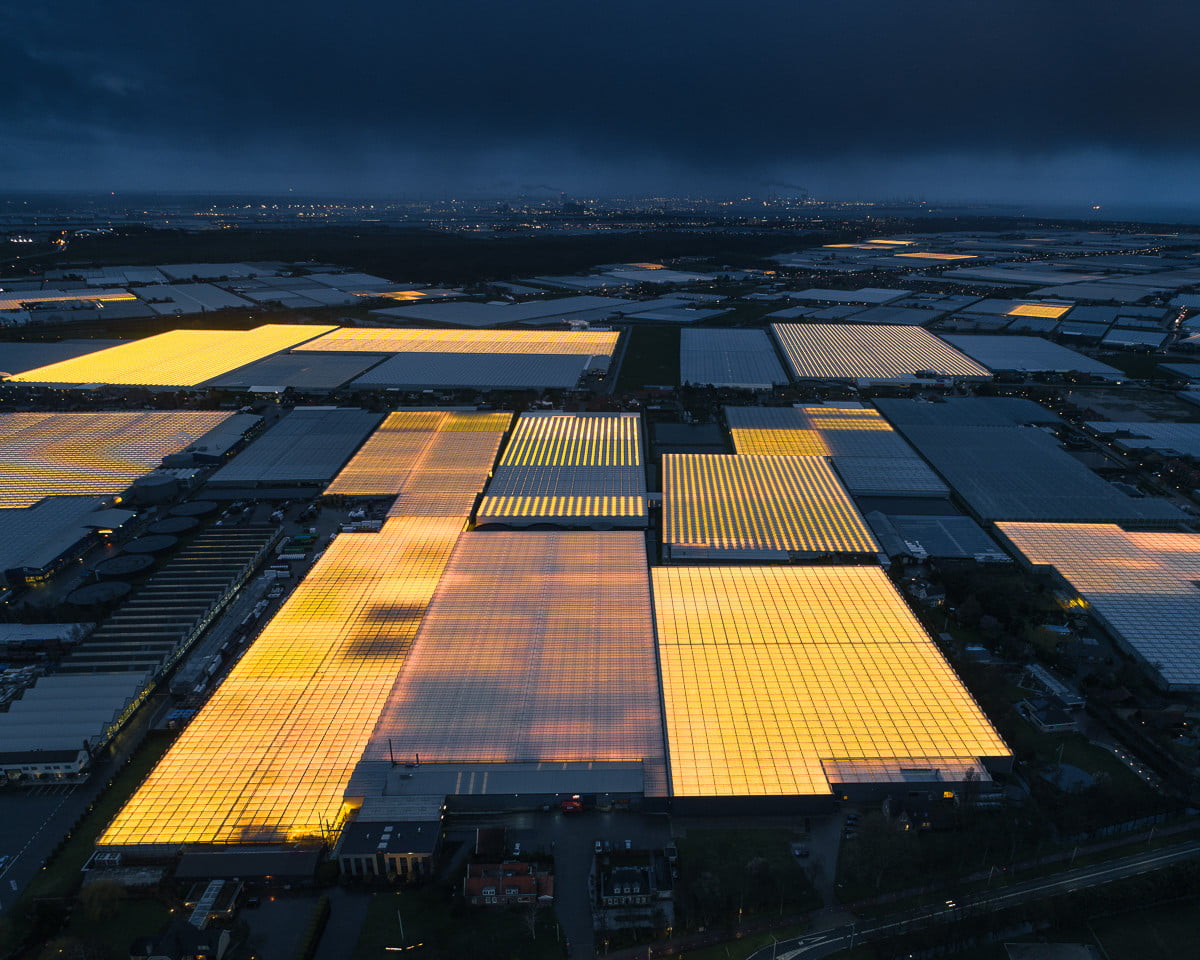 The way in which the Netherlands uses architecture to feed the world is best seen from above. In images such as Tom Hegen’s The Greenhouse Series, Dutch agriculture is defined by vast landscapes of greenhouses, some covering 175 acres, which dominate the architectural landscape of South Holland. In total, the country contains 36 square miles of greenhouses, an area 56% larger than the island of Manhattan.

In the Westland region, appropriately dubbed the “greenhouse capital of the Netherlands” by National Geographic, greenhouses are stitched into the landscape, filling the voids between cities, suburbs, and industrial plants. As National Geographic elaborated, these landscapes are often defined by “banks of what appear to be gargantuan mirrors stretch[ed] across the countryside, glinting when the sun shines and glowing with eerie interior light when night falls.”

Underneath the sea of illuminated glass roofs, tech-savvy farmers use hydroponic systems and geothermal energy to generate unparalleled yields using little resources. Dutch greenhouses use 1.1 gallons of water per pound of tomatoes produced, in contrast to the 25.6-gallon global average, with some farmers producing over 100 million tomatoes per year from 14 hectares of land. This is made possible due to a controlled indoor environment, where precise, reliable temperatures and humidities are married with low threat of contamination and no pesticides.

The environmental performance of the greenhouses is informed by architectural considerations. Double-glazed roofs allow for the retention of heat, while light modular steel frames allow for rapid expansion and adaption, without hampering natural light. Operators such as Duijvestijn Tomatoes are more innovative still, with CO2 from a local Shell oil refinery piped into the greenhouses to aid plant growth, while LED lights allow for plants to continue growing throughout the night. As Hegen points out while reflecting on his photographic series, taken at night, Dutch legislation means 98% of electric lighting must be contained within the greenhouses using blackout screens and curtains, so as to mitigate against light pollution.

The manifestation of these built structures across the Dutch countryside is the result of global flows of policy and ideas. In the early 2000s, the Dutch made a national commitment to a new form of sustainable agriculture, which has seen the elimination of chemical pesticides in greenhouses, and a reduction of antibiotics by 60% since 2009. Meanwhile, driving this innovation is the nearby Wageningen University & Research (WUR), an institution regarded as one of the world’s leading researchers in agriculture. As new techniques and understandings emerge of how to feed ever-increasing urban populations, countryside such as those in the Netherlands will continue to adapt and grow in response, moving further away from the idyllic and natural, and more towards artificial, industrial, and controlled.

This architectural transformation of the countryside will continue to accelerate, as urban population growth places more demands upon it. By 2050, the world will be home to 10 billion people, up from 7.8 billion today. The result will be a need for greater agricultural yields, using less water, less energy, and less land. The Netherlands offers one narrative of how architectural typologies will come to manifest the shifting relationships between cities and countryside, as well as the relationship between food and urbanism.

As the architectural profession grapples with the fast pace of technology, which continues to transform the design and construction process, architects may increasingly be called to reimagine new ways of shaping efficient, contextual, integrated structures for the future of agriculture. Such a possibility has already occupied the mind of OMA founder Rem Koolhaas, writing for ICON in 2014: “husbandry of the land is now a digital practice. For example, the tractor, which revolutionized the farm in the 19th century, has become a computerized work station. It is a series of devices and sensors that create a seamless, yet detached digital interface between the driver and the earth. The countryside in terms of how we work is becoming similar to the city. The farmer is like us – a flex worker, operating on a laptop from any possible location. […] This is not to say that it is all bad. It is only ironic that such drastic transformations are barely on the radar in our education and thinking.”

The images and video which accompany this article are the work of Tom Hegen, and his project titled “The Greenhouse Series.” More images can be found on his Instagram handle @tomhegen.de