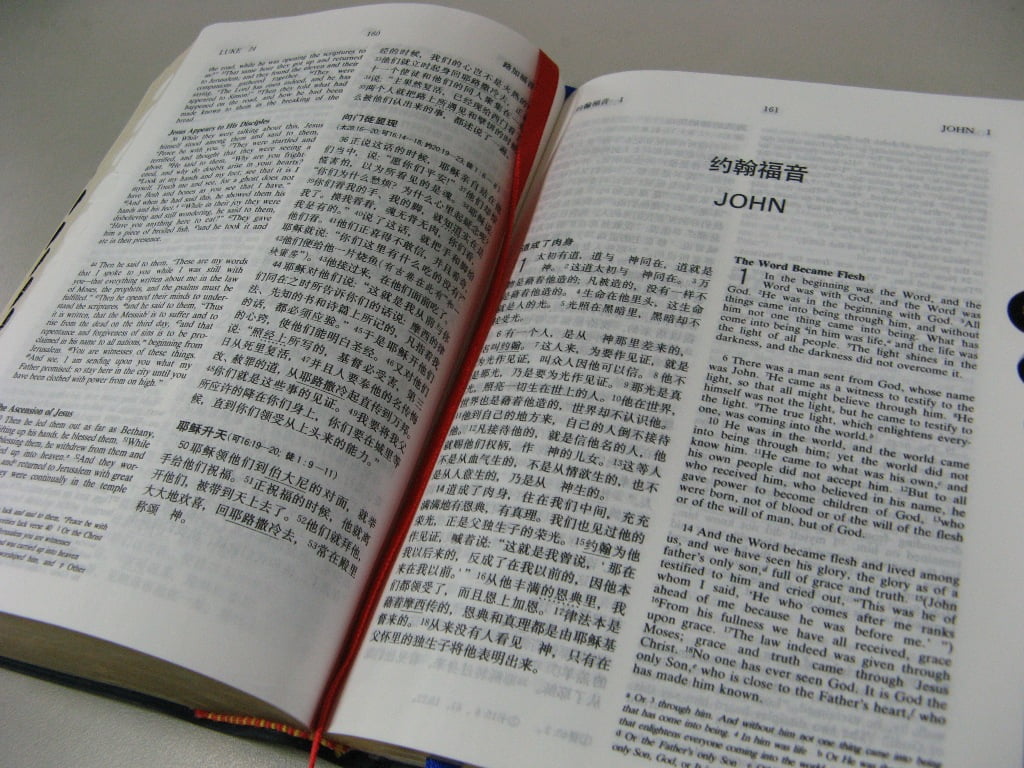 hina’s Communist government has given the world another example of how socialism is incompatible with Christianity, literally chapter and verse. A Chinese textbook teaches students that Jesus Christ stoned a woman to death while admitting that He is a sinner. China’s besieged Christian population says the government has twisted the Gospel in an effort to convince young people to obey edicts handed down by the Chinese Communist Party.

The offending passage appears in a textbook intended to teach law and ethics to students in secondary vocational schools. It reads like a familiar paraphrase of the Gospel of St. John 8:3–11, up to a point: Religious leaders catch a woman in the act of adultery and bring her to Jesus, asking what should be done with her. He responds that anyone without sin may cast the first stone. But then the text takes a dark and jarring turn.

According to a translation posted by Annie Geng in Harper’s magazine, the Chinese version of the story concludes: “When the crowd retreated, Jesus raised a stone and killed the woman, and said, ‘I am also a sinner, but if the law can only be executed by a spotless person, then the law will die.’”

The ahistorical embellishment that Jesus Christ stoned a woman to death is visceral and striking. The depiction of the Prince of Peace as an avenging angel of administration has more in common with the Muslim ahadith than the New Testament. Yet it served the purposes of Chinese Communist Party, which apparently plagiarized this counterfeit, “other Gospel” from a story by Orson Scott Card and passed it off as Scripture in order to whitewash its own guilt.

“As told to Chinese students, the story teaches that the law and the Party are good and pure, and transcend the impure human beings who happen to represent them. Even if the officers are corrupted, their decision should be accepted – because, honest or corrupted, they represent the Party, and the Party’s law should never be questioned,” explained Bitter Winter magazine.

The Communists’ revision teaches that even disreputable or dishonorable people may mete out punishment. This discipline may encompass everything up to and including the death penalty. And even Jesus Christ Himself endorses their actions.

Of greatest eternal importance, the Bible teaches that Jesus Christ led a sinless life before dying for the sins of the human race on the Cross. In the same chapter of the Bible, Jesus asks, “Which one of you convicts me of sin?” The Apostle Peter wrote that “Christ also suffered once for sins, the righteous for the unrighteous, that He might bring us to God.”

This alteration of the fourth Gospel represents another facet of the Chinese government’s “sinicization” of religion, which would force priests and pastors to interpret “religious thought, doctrines, and teachings in a way that conforms with” the CCP’s party line. To this end, Chinese Communist officials have oppressed true Christian leaders, replaced the Ten Commandments with posters containing socialist propaganda, erased the First Commandment to “have no other gods,” and ordered believers to remove pictures of Jesus from their living rooms or lose the government pension that keeps them alive.

The latest, government-sponsored sacrilege – which was first reported by UCA News in September – teaches three lessons.

First, secular government inevitably seeks to subordinate the church to its own aims. This is true, whether the leader is King Henry II, Peter the Great, or Josef Stalin. Whenever the church and state form an organizational unity, the government will always wield greater earthly strength.

Second, all partisans may find themselves tempted to distort Jesus’ message – albeit rarely as openly as in this case. Every attempt to leverage Jesus’ authority in a matter not addressed by Scripture risks altering His message for our own private aims. And as quickly as political arguments dissolve personal relationships, deifying politics deforms our Lord into a cosmic bully raining down death, rather than grace, on our enemies.

The cognitive dissonance produced when a Christian reads the Chinese text drives this point home. The authentic Gospel pericope contains one of the most evocative stories of God’s grace. According to St. Augustine of Hippo, the woman actually “expected to be punished by [Jesus] in Whom sin could not be found.” There was no question of her guilt or Jesus’ innocence. Instead, “He, Who had driven back her adversaries with the tongue of justice, rais[ed] the eyes of clemency towards her” and told her to “go, and sin no more.” By doing this, Jesus “condemned sins, not man.” It tears at the heart to see such this divine message of forgiveness and redemption turned into a petition for capital punishment and blind obedience.

Third, Christian silence enables this kind of distortion and persecution. “We hope that Church authorities will come forward and speak up for the Church,” an Asian Catholic named Kama told UCA News. Thus far, her hopes have been misplaced.

“We can no more freely announce the Gospel values” in Hong Kong, said retired Cardinal Joseph Zen. He said his successor, Cardinal John Tong Hon, had been told to quietly acquiesce to Chinese directives “by Vatican authorities.” Aside from this retired prelate, the Roman Catholic Church has greeted China’s months of provocation and suppression with silence.

Indeed, silence would be an improvement on Vatican figures’ statements about Beijing. Bishop Marcelo Sánchez Sorondo, the chancellor of the Pontifical Academy of Social Sciences, declared last February that “right now, those who are best implementing the social doctrine of the Church are the Chinese.”

If Pope Francis won’t speak out against the unjust imprisonment of Jimmy Lai, could he bring himself to denounce the Chinese Communist Party’s portrayal of our Savior as a murderous party apparatchik? Might he at least rein in Sorondo’s extravagant and demonstrably false praise? A pontiff who has declared all applications of the death penalty “inadmissible” might condemn the presentation of a bloodthirsty Jesus in Chinese schools on those grounds alone.

The time has come for a Christian leader to use his global exposure and moral authority to repeat the words of the Apostle Peter, that there must come a time when “we ought to obey God rather than men” (Acts 5:28-29).