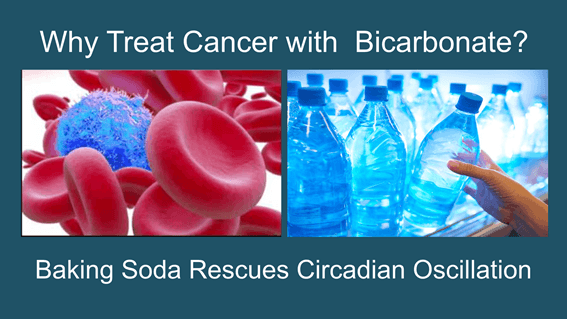 Now we have more reason than ever to focus on bicarbonate therapy for cancer. The science that sustains the use of bicarbonate is as profound as it is multidimensional. It is with great pleasure that I am refocusing my attention on sodium bicarbonate (writing the third edition for my Rich Man’s Poor Man’s Cancer Treatment book) for it is a solution for everyone because it is so widely available and affordable. It is the most basic of all treatments, fundamental if you want to address the roots of cancer and many other diseases.

For less than the cost of a mineral water bottle, one can purchase several weeks of enough baking soda to treat cancer and many other diseases. No wonder the powers that be do not want anyone talking about it for cancer or viral treatments. “If you have not read Part One on Bicarbonate and Cancer, see it here.)

A new Ludwig Cancer Research study said, “If you want to clean cancer’s clock—that is, defeat it decisively—you may want to really clean it—that is, restore it to proper working order. Only cancer cells that remain active, in sympathy with the tick-tock of their internal circadian mechanisms, remain susceptible to cancer therapies. So, how might these circadian mechanisms be kept in motion? Sodium bicarbonate now promises to awaken cancer cells that have gone to sleep deep inside tumors, where oxygen deprivation and acidic conditions go hand in hand. By buffering against acidification, sodium bicarbonate rescues circadian oscillation.”

You can think of the circadian cycle as a sort of internal clock of your body regulating many different mechanisms. The cycle starts over about every 24 hours (hence the term “circadian,” coming from Latin circa “about” and dies “day”), and among its many functions, it tells cells when they’re supposed to produce and consume nutrients. Healthy cells are normally allowed to do so for about 12 hours a day, to prevent them from being overwhelmed by a flood of excessive nutrients.”

Want to understand your health situation and learn what best to do to feel better? Schedule a free 15-minute Exploratory Call. »

When bicarbonate is given to mice in their drinking water, it neutralizes hypoxic patches’ acidity in tumors. This sends lysosomes zipping back to the nuclear periphery in cells — where RHEB was waiting — and restored mTOR activity. “Cells don’t want to make proteins or other biomolecules when they’re under stress,” says Dang. “They want to slow things down and only awaken when things return to normal.”

Acidification, the Ludwig researchers report, essentially disengages some of the elements that keep the cell’s circadian clock ticking. This acid-mediated effect, the researchers assert, can be reversed by sodium bicarbonate. When they gave tumor-xenografted mice water that had been supplemented with sodium bicarbonate, the acidity of hypoxic patches in the tumors was neutralized.

The study, presented on May 31, 2018, in the journal Cell, in an article entitled ‘Acid Suspends the Circadian Clock in Hypoxia through Inhibition of mTOR.’ “Unexpectedly, we uncovered a profound disruption of the circadian clock and diurnal transcriptome when hypoxic cells are permitted to acidify to recapitulate the tumor micro-environment,” the article states. “Buffering against acidification or inhibiting lactic acid production fully rescues circadian oscillation.”

The study’s authors, led by Chi Van Dang, M.D., Ph.D., scientific director of the Ludwig Institute, conclude that acid produced during the cellular metabolic response to hypoxia suppresses the circadian clock through the diminished translation of clock constituents. Dr. Dang, who is also a professor in the Molecular and Cellular Oncogenesis Program at The Wistar Institute, said, “But if you add baking soda to the drinking water given to those mice, the entire tumor lights up with mTOR activity. The prediction would be that by reawakening these cells, you could make the tumor far more sensitive to therapy.”

The Ludwig study details how in response to acidity, cells turn off a critical molecular switch known as mTORC1 that, in ordinary conditions, gauges the availability of nutrients before giving cells the green light to grow and divide. That shuts down cell’s proteins’ production, disrupting their metabolic activity and circadian clocks, pushing them into a quiescent state.

“We started out with a question about oxygen starvation and the circadian clock, and we ended up discovering a new mechanism by which acidic conditions in tissues shut off a lot of things—including the cell’s molecular clock,” muses Dang.

The finding that something as simple as baking soda could reverse this effect and render quiescent cancer cells susceptible to cancer therapies excited Dang. “The concept is so easy,” he says. “It’s not some $100,000 per year drug. It’s literally just baking soda.” Using MRI, medical scientists have seen how much-tagged bicarbonate is converted into carbon dioxide within tumors. In more acidic tumors, more bicarbonate is converted into carbon dioxide.

Cancer cells have a lower pH than surrounding tissue.

Other research points out that bicarbonate can also be used to diagnose cancer in its earliest stages. We know that bicarbonate turns to CO2 easily when in contact with acid, but few know that cancerous tissue turns bicarbonate into carbon dioxide. A few years ago, a United Kingdom Cancer Research team found MRI scans could track changes in bicarbonate and therefore identify cancers even in the very early stages.

All cancer has a lower pH, meaning it is more acidic than surrounding tissue. Working with mice, the researchers boosted the MRI sensitivity more than 20,000 times. Using MRI, they looked to see how much of the tagged bicarbonate was converted into carbon dioxide within the tumor. In more acidic tumors, more bicarbonate is converted into carbon dioxide.

Lead researcher Professor Kevin Brindle, from Cancer Research U.K.’s Cambridge Research Institute at the University of Cambridge, said: “This technique could be used as a highly-sensitive early warning system for the signs of cancer. By exploiting the body’s natural pH balancing system, we have found a potentially safe way of measuring pH to see what’s going on inside patients. MRI can pick up on the abnormal pH levels found in cancer, and it is possible that this could be used to pinpoint where the disease is present and when it is responding to treatment.”

Affecting the pH of the Extracellular Matrix Surrounding Tumors

The cells’ surroundings, known as their microenvironment, contribute to how cancer occurs and grows. Cancer involves an interaction between rogue cells and surrounding tissue. A clear message of Dr. Mina Bissell, the director of life sciences at the Lawrence Berkeley National Lab in California (LBNL), is cancer cells cannot turn into a lethal tumor without the cooperation of other cells nearby.

That may be why autopsies repeatedly find that most people who die of causes other than cancer have at least some tiny tumors in their bodies that had gone unnoticed. According to current thinking, the tumors were kept in check, causing no harm.

The interactions between cancer cells and their micro and macro environment create a context that promotes tumor growth and protects them from immune attack. The surrounding extracellular matrix interacts to shape cancer cell behaviors such as polarity, migration, and proliferation.

Researchers at the Massachusetts Institute of Technology (MIT) in Cambridge found that acidic, or low-pH, tumor regions alter gene expression in cancer cells in ways that make them more aggressive.[1] The “malignant progression of cancer” depends on cancerous cells participating in an “intricate network of interactions” with other parts of the tissue surrounding them, the tumor microenvironment. Reducing the acidity of the tumor microenvironment returned the gene expressions almost back to normal. The researchers reduced tumor acidity in the mice by adding sodium bicarbonate to their drinking water. Other studies have also found that this reduces metastasis in mice.

However, senior study author Frank B. Gertler, a biology professor at MIT, says humans do not tolerate sodium bicarbonate. So it would not be a suitable potential treatment for them. One has to wonder what planet he lives on. Sodium bicarbonate is available in every drug store and supermarket globally, used by millions for decades before Gertler was born.

The H. Lee Moffitt Cancer Center & Research Institute confirm that cancer cells have the ability to grow in an acidic tumor environment that is detrimental to other cells, including immune cells. In a new article, researchers have reported that neutralizing the acidic tumor environment increases the efficacy of several immune-targeting cancer therapies. They found that sodium bicarbonate combined with PD-1 or CTLA-4 Inhibitors or adoptive T-cell transfer reduces melanoma and pancreatic tumor growth.[2]

Because bicarbonates control the pH in your body, sodium Bicarbonate can rapidly alkalize your body far more effectively than a diet. Still, it can’t be continued forever because of the excess sodium. That is why I recommend a product called pH Adjust because, in addition to sodium bicarbonate, it has potassium bicarbonate (reducing the sodium load and supplying essential potassium) and a dose of magnesium. Magnesium bicarbonate has no such problems and can be used long term.

Special Note: I have developed a full system of natural medicine that I call Natural Allopathic Medicine. At heart, it transposes ICU use of the above natural drugs (and more than several others) used in dire medical situations to home use for acute and chronic illnesses, including cancer. Instead of limiting their usefulness for near-death cases, we employ them at high dosages daily to reverse disease. I do consultations from a distance to teach people how to set up intensive treatment centers in their own homes using only natural substances that are powerful and safe. Information can be gathered freely on my site or in my many ebooks, books in print, and books in other languages.