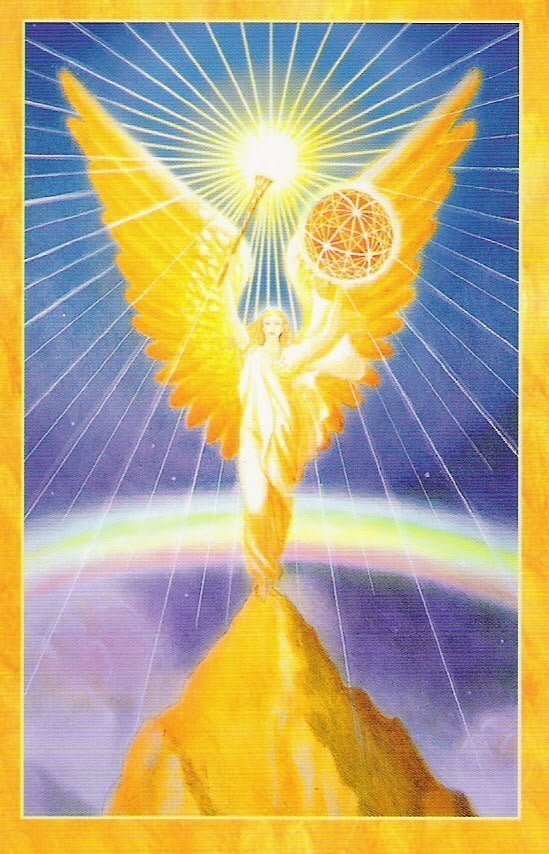 Many things have occurred in our human history here on Earth that we never learned and were lost to history. I bring this story to you today, December 25th, on the day that the Christian world celebrates as the birthday of Jesus. Whether or not Jesus was really born on this day is really not important. There are truly good people all over the Earth that model their lives on this iconic being known as Jesus whose sole purpose for incarnating here was to teach humanity that the most important thing in life is LOVE. This story is an example of LOVE. If it makes you cry and makes you think; let it also make you LOVE.

The Golden Angel
By Candle

The majority of humans believe that the archangels exist. Then there are others who know, through a personal experience, that they do exist. So these people have no doubt. The following account cannot be proven. If this account was known and written down, the written account was destroyed a few thousand years ago.

Before Jesus decided to be born down here on earth, he asked a friend to be his Guardian Angel. The person that Jesus chose was a woman. The reason why he chose her is because he knew that he would be beaten, whipped and then crucified. It terrified him. So he chose this woman because she, herself, had been beaten, whipped and crucified 1000 years earlier simply because she was a woman. Along with this fact, Jesus knew that women can tolerate a lot more physical pain than men could. So he asked his friend if she would do him this favor. She said yes and promised that she would take his physical punishment. Furthermore, she decided to name herself Mercy. Because it would be an act of mercy to take as much pain away from Jesus as she could. Archangel Michael

So Jesus was born. When he turned 33, he was arrested. Mercy was by his side, as she promised she would be. When the Roman soldiers began beating Jesus, Mercy was on her hands and knees. She crawled around Jesus, taking the blows of the kicks so that Jesus would not feel the full impact if Mercy was not there. Along with Mercy, the Archangel Michael and the Archangel Gabriel were there. They, too, were moving around Jesus, taking the blows meant for Jesus.

Then the meanest of the Roman soldiers walked into the room with a cat of nine tails. Contrary to what the official, Biblical story reported, Jesus’s wrists were not tied to a wooden pole. The Roman soldiers wanted Jesus to keep moving and turning. It made it much easier for them to batter up most of his body.

Mercy, who was a Golden Archangel, was on her hands and knees by Jesus’s feet. The Archangel Michael placed his hands on her waist and gently tried to pull her away from Jesus. Because Michael, Gabriel and Jesus knew that the whip blow would be too much for Mercy to handle. But Mercy wrapped her arms around Jesus’s ankles and cried out, “I promised!”

Then the Roman soldier raised the cat of nine tails high over his head. As he did, Jesus placed his left hand on Mercy’s right shoulder. Then the whip came down hard on Mercy’s lower back. Mercy cried out in agony and collapsed on the floor. The blow broke her back and killed her. Jesus’s head went back. The pain and anguish on his face was heart rendering. So was the pain and anguish on the faces of the Archangel Michael and Gabriel. They were on their knees, looking up and their crying was heart wrenching. None of them could believe that Mercy would take that blow. A blow that would have hurt Michael and Gabriel.

But the Roman soldiers did not know that three archangels were there, and that one of those archangels was dead. But since this female Golden Angel gave her life for Jesus, Creator had her body healed and gave her back her life. Mercy was shown mercy.

When Jesus was on the cross, Mercy, Michael and Gabriel hovered in the air. They were waiting for Jesus’s soul to pass over. Once he did, Mercy wrapped her arms around the cross that Jesus was on and they flew up with Michael and Gabriel on either side. Mercy did not know why she took the entire cross with Jesus on it. But it was just symbolic. Mercy had been crucified, so taking the entire cross with Jesus on it was just fulfilling her purpose in healing her own crucifixion 1000 years before.

I cannot tell that part yet. But I did ask Michael if I was right. He told me yes. But he won’t answer my questions about the Golden Angels. All he will tell me is that when I am ready to know, my own soul will reveal it to me. And that is true. All truth is within us already, in our soul. All we have to do is look inward, meditate, awaken our souls and our own souls will reveal the truth to us. Jesus himself said that “the Kingdom of God is within”. Yes, it is. But you have to meditate to get to the Kingdom of God. “Knock and the door will be opened unto you,” “ask and ye shall receive.” It is true. It is always better to awaken your soul, because your soul will give you the truth. It is 100 percent accurate and you will have no need to rely on anyone or anything outside of yourself.