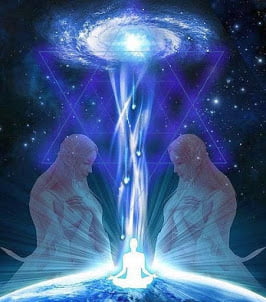 
As in the case of the Pink Light, it may be worth to be taken in consideration that in order to visualize properly the Blue Light, we have to understand it at least in 3rd density terms.

We are also entitled to consider that the 3rd dimensional visible veritable Blue Light is to a great extent the 3rd density counterpart of the metaphysical Blue Light which carries the energy we consider to imagine from here, on the earth…

So, the proper understanding of it in the earthling physical terms, concerning its visible spectrum, will help us at an unconscious level to visualize what in fact should it be.

Think at first that the power of light frequency emission (relative to human perception) is proportional to f (frequency of radiation, from 760nm to 380nm).


Going forward, we might also speculate that a frequency band (again, assimilated with 3rd D physics) of a phenomenon occurring in higher dimensions has to be resembled in the same way from a 3rd density audible and visible point of view…


What we have ‘at hand’ (thus it is at the hand of very few scientists, not at everyone’s hand), but it is however an example of an earthling ‘natural occurring’ of blue, light and sound as well,
is the blue light of Cherenkov radiation:

For an average awakened and physics educated person, and from an esoteric point of view, we may consider the blue light of Cherenkov radiation as… the ‘most blue’ among all blue lights which may be now seen on earth…


However on your display will appear only a resemblance of the very Cherenkov radiation, resulting from the mixing of the display’s main colors. It is not the continuous spectrum radiation as it might be seen in-situ where it occurs.
However, it gives us a rough idea of how it may look like.
It seems also matching the blue on the right page of the blog http://2012portal.blogspot.com, “MASS MEDITATIONS CLICK HERE”…