In the previous article about smartphone and tablet addiction, I discussed the addictive techniques used by app developers to get people hooked on using their websites.

Facebook, YouTube, Netflix, SnapChat, and other websites were cited as examples of websites that use habit-forming techniques to grab and hold the attention of users for many hours a day. They take advantage of the power of addiction as part of their strategy to maximize advertising revenue for those who own the websites.

Everyone will be confronted by the power of addiction at some time in their lives – whether it is our own addictions or the addictions of others who are close to us.

Simply put, the human flesh desires, lusts, and seeks to satisfy its cravings. Even though addictions are part of our lives, the typical response to the presence of addiction is to deny it exists until overwhelming consequences break down the wall of denial.

Technology Addiction is Closely Related to Many Other Addictions

All these addictions damage neurons in the brain and eventually rob us of pleasure and happiness, leaving us feeling empty, lonely, and depressed. [2]

Addictions are not the Result of a Weak Will

Addictions develop when people repeatedly consume substances or participate in activities that release the brain hormone dopamine with such a frequency that the elevated level of dopamine overstimulates and damages brain cells. [2]

Dr. Robert H. Lustig, M.D., M.S.L., Emeritus Professor of Pediatric Endocrinology, University of California at San Francisco, is a leading expert on brain function and addiction. He compares the power of technology addiction such as smartphones to the equally powerful addictions to sugar or drugs.

Speaking about the addictive power of technology, Dr Lustig stated:

Small screen apps alter dopamine levels in the human brain and can create addictions that are just as devastating to normal living as narcotic addiction or alcoholism.

Dr. Lustig has been studying the interaction between brain hormones and brain function for more than 30 years. [10] His work provides clear evidence that addiction alters dopamine and serotonin levels in the brain, which directly controls our experience of pleasure and happiness.

A lot of people don’t necessarily understand that they are addicted – they [just] know they need something.

When “wants” become “needs” that is usually a sign of addiction.

If you find yourself checking your cellphone every 2 minutes waiting for a new email, this is usually a sign of a cellphone addiction. [2]

The use of small screen devices, whether a smartphone or tablet of some type, effects the neurobiology of our brains. [3, 4] Even though scientific debate about the existence and nature of technology addiction continues [1, 5], evidence continues to mount, which shows that small screen usage is changing our social behavior and for many – the change has become a deeply rooted addiction. [1, 2, 3, 4, 5, 6]

Self-Absorption with a Small Screen is Not Necessarily an Addiction

Even though the interest in having face to face chats with strangers in public settings seems to be waning along with basic skills of conversation – this does not mean that all small screen users are technology addicts.

However, for many, the blue glow of their screens, the steady stream of ever changing images, and the almost seamless link between the physical sensations of touching the screen and the powerful stimulation of sight and hearing quickly become compelling forces that demand more and more time and attention.

According to a 2017 survey, 47 percent of U.S. smartphone owners have made an effort to limit their phone use in the past. Many people find the powerful attraction of Facebook, Twitter, Instagram and many other apps to be irresistible. Even though there is a desire to reduce usage time, only 30 percent of smartphone owners have succeeded in reducing their phone time. [7]

The following chart illustrates the struggle that people are having with their smartphones. 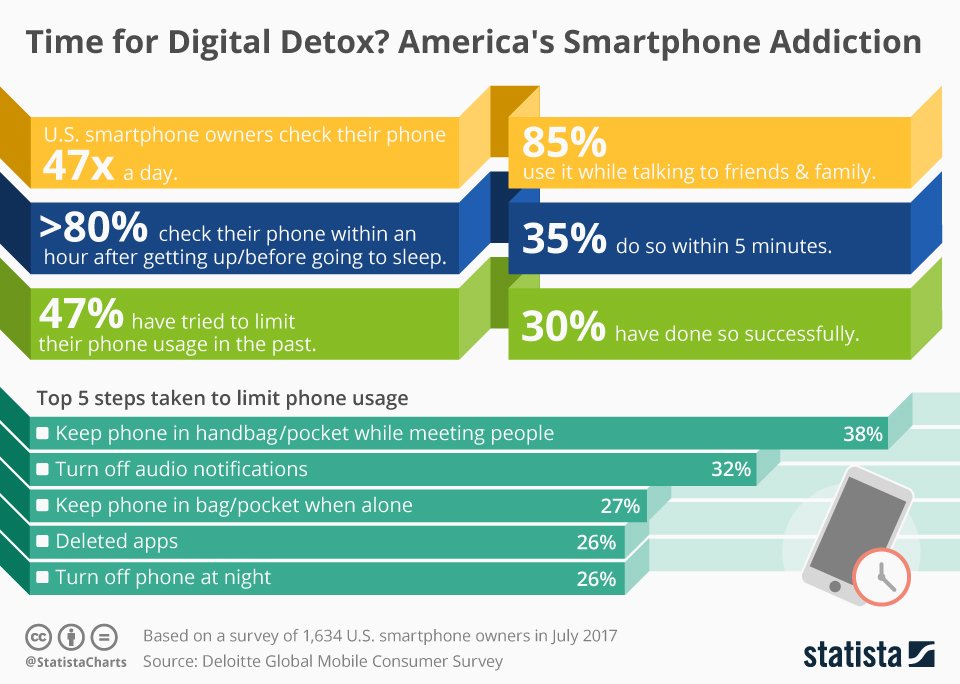 In other words, about 1 out of 2 smartphone users are concerned that they are using their phones too much, and 70% of those are unable to reduce the time they spend with their phones. Being unable to cut back on a behavior is a sign of addiction.

A 2016 survey conducted by Common Sense Media shows that many teens are aware of their small screen addiction. The report stated:

… “50 percent of teens “feel addicted” to mobile devices, and 59 percent of their parents agree that their kids are addicted. Additionally, parents and children are concerned about the effects mobile device use has on their daily lives – from driving to the dinner table – with over one-third of the families in the Common Sense poll arguing about it daily.” [8]

Addiction, whether to a physical substance or to smartphones, is not logical – it is physiological and emotional. It changes the hormones in the brain and kills brain cells.

The Dopamine-Serotonin Connection to Addiction

Addicts commonly feel depressed, because they no longer feel the pleasure of the dopamine high/rush that they once enjoyed. They also no longer experience happiness and contentment, because their serotonin levels have fallen.

Dr. Lustig explained that dopamine and serotonin are two biochemicals (neurotransmitters) that the brain makes and uses to communicate between one neuron (brain cell) and another. [9]

Dopamine – Addiction – and the Loss of Pleasure

Dopamine is a feel-good hormone. When dopamine is released in the brain, we experience pleasure. It is an excitatory hormone, which means it encourages neurons to get excited. [2]

The constant release of dopamine that occurs from using apps that have been designed to be addictive will, over time, downregulate the dopamine receptor sites in brain neurons. This means that the neurons begin to turn off their own receptor sites so they won’t be stimulated by the presence of excess dopamine. This is a self-protective mechanism. [2]

The systematic downregulation of dopamine receptors prevents the death of neurons for a while. Downregulation also prevents people from experiencing the intense pleasure (the high and the rush) they used to feel from addictive substances or from activities such as the use of addictive apps. [2]

The consequence of downregulation for small screen users is that they need to increase the time they spend using the apps to get the pleasurable rewards they once enjoyed. The pursuit of getting repeated dopamine hits and highs is however limited by the fact that they take longer to achieve and there are only so many hours in a day.

Dr Lustig describes the process of getting a dopamine hit. He stated:

When the high from using apps is no longer attainable, this means the neurons in the pleasure center of the brain have begun to die. It doesn’t matter whether the addiction is to narcotics, sugar, or small screens.

Addictive Apps Must Provide Variable Rewards to Get Us Hooked

As described in the previous article, addictive apps are designed to present variable rewards to their users. Apps that deliver content that remains unknown until the user begins to interact have a powerful capacity to grab the attention of users and are highly addictive.

One never knows what will come up, for example, on Facebook. The desire for human contact and the desire to break loneliness drive people to Facebook, as well as the unknown rewards they receive for spending time on the site change every day. If the content of an app is highly predictable, then its power to be addictive will be much lower.

The Serotonin Connection to Addiction – the Loss of Happiness

Dr. Lustig describes the function of serotonin in the brain. He explains that unlike dopamine, which excites neurons, serotonin inhibits or relaxes neurons. The experience of contentment or happiness comes from neurons in their unexcited, relaxed state.

Serotonin is inhibitory – it is not excitatory. It inhibits its receptors to provide contentment. Serotonin slows down those neurons instead of causing them to fire up – to Zen out. So, you can’t overdose the serotonin high.

[Thus] you end up with the process of contentment – the feeling of being one with the world, … that thing we call happiness.

[However], there is one thing that downregulates serotonin – [that is] dopamine.

So, the more pleasure you seek the more unhappy you get. [2]

Dr. Lustig’s most recent book, The Hacking of the American Mind, describes a corporate scheme to sell us pleasure by promising us happiness. He believes this scheme is creating an epidemic of addiction, depression, and chronic disease. [4]

Dr. Lustig explains what is happening. He stated:

Las Vegas, Madison Avenue, Wall Street, Silicon Valley, and Washington D.C. have very specifically and in a coordinated fashion, confused and conflated the term happiness with the term pleasure, so that you can “buy happiness.” … This is based on hedonic substances – substances that drive pleasure rather than happiness. And in the process, we have become most decidedly unhappy. [2]

Just think about how often advertisements use the word ‘happy’ or portray happiness as a way of selling products. If we are asleep to the technique of selling pleasure under the name of happiness, then we can be easily manipulated into buying a steady stream of pleasurable experiences and activities when what we really want is happiness. We can be led into the pleasures of addiction by those who promise happiness, but who are only capable of delivering temporary pleasures that satisfy the lusts and desires of the flesh.

What is the Difference between Pleasure and Happiness?

Dr. Lustig identified seven characteristics that will help us understand the difference between pleasure and happiness. These differences are extremely important, because the ultimate intervention for small screen addiction involves replacing negative pleasure seeking with the positive creation of happiness. In other words, small screen addicts and all other addicts will need to make changes in their lives that will allow them to create happiness for themselves and others and to turn away from the self-serving and self-satisfying power of pleasure and addiction.

The experience of happiness and contentment come from the release of serotonin, which causes neurons to relax and slumber.

Addictions never cause a release of serotonin – they only trigger the release of dopamine. Thus, addictions will never provide happiness only suffering.

Happiness cannot be purchased. It must be built up over time through human interactions and healthy lifestyle choices. It comes from engaging in activities that can produce serotonin. Two of these activities were mentioned in the preceding list. They are giving to others and participating in social groups.

Dr. Lustig has set forth a set of four practical activities, which are intended to elevate serotonin and produce happiness.

If you would like to learn more about dopamine, serotonin, brain activity, addiction, and the four practical activities that can restore happiness for people with addictions, then use the following video.

If you would like more detailed information about the research that supports Dr. Lustig’s addiction theory as well as the basic information discussed in the preceding video, then listen to the following presentation by Dr. Lustig.

[1] “Are Kids Actually Addicted to Technology? It’s not a Drug, But It May as Well Be: Expert Opinions on Whether Kids are Addicted to Tech,” Jenny Anderson, Quartz, February 9, 2018.

[9] The definition of these two hormones provided by Dr. Lustig was edited for clarity. It was given in “The Hacking of the American Mind,” Dr. Robert Lustig, M.D., University of California TV, YouTube, 9/6/2017.