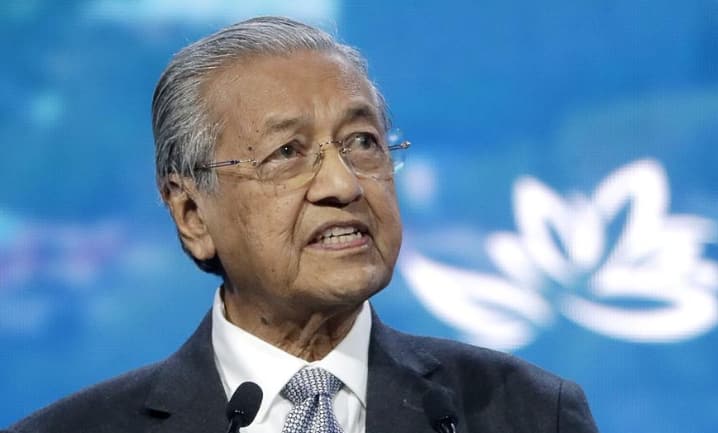 Whether one admires his political tenacity or abhors his often controversial candidness, it is beyond dispute that Malaysian Prime Minister Mahathir Mohamad functions exceedingly well for a man of his age.

At 94, the world’s oldest elected leader amazes people with his stamina and is frequently asked his secret to long life.

Mahathir, who worked as a physician in his home state of Kedah before entering politics in 1964, recently published two columns in local broadsheet the New Straits Times listing his habits and practices for keeping up a healthy lifestyle, touching on everything from practicing good posture to treating a receding hairline.

According to the nonagenarian political heavyweight, staying in the pink of health begins with self-discipline, particularly through conscious eating habits and controlling one’s desire for tasty foods.

“We should eat to live and not live to eat…the amount must not be more than what is needed,” he advises. “Obesity is not good for health or longevity.”

The accumulation of “fat around the waist” is a sign of a person eating beyond their body’s needs, which Mahathir says can be remedied by reducing the quantity of one’s meals by one-fourth or one-third.

“Avoid carbohydrates (rice) and fatty (oily) food. Very quickly the tendency to accumulate fat around the belly will stop,” he wrote.

It is useful advice given Malaysia’s reputation as the most obese country in Asia. While Mahathir claims he has weighed in at between 62 and 64 kilograms for the last 30 years, around half of the Malaysian population is overweight or obese, a trend that has rose sharply over the past two decades according to the World Health Organization (WHO).

Fattening coconut milk-based curries are a staple of Malaysian cuisine and cooking food in hot fats or oils is prevalent. Like elsewhere in the region, the popularity of fast food has risen dramatically in recent years, with 49% of Malaysians tucking into the fare at least once a week in 2018, according to data collected by market and opinion research.

In July, the Malaysian government introduced a tax of 40 sen (10 US cents) per liter on sugary drinks in the hope of combating obesity, a move the WHO called “a step in the right direction.” Critics, however, say that such measures must go hand-in-hand with more effective public health education to make a significant impact.

“Addiction to fast food is dangerous. Do not take more than two bottled or canned drinks a day,” the premier advises.

“When food is tasty, more of it would be taken. The stomach responds to the bigger intake by becoming bigger… As the stomach grows bigger and bigger from overeating, more food would be needed to assuage hunger.”

Such overeating, Mahathir warns, over-stresses the liver, kidneys and pancreas, and raises the likelihood of blood pressure diseases and heart attack.

Mahathir himself underwent heart bypass surgery in 2007 after suffering two heart attacks within 10 months and fully recovered. “Heart attacks are not as fatal as they used to be,” he wrote.

The 94-year-old offered no specific dietary recommendations apart from more fruits and vegetables and less rice or carbohydrates.

Mahathir is known to enjoy grilled buffalo meat with tamarind sauce, a spicy and sour oxtail dish known as asam pedas, as well as other Malaysian favorites such as chicken curry and roti canai. He is said to dislike fish dishes.

With his punishing schedule in active politics, it comes as no surprise that Mahathir urges the elderly to stay active. He advises pensioners to “walk about and do some physical exercise” and “resist the urge to sleep long hours,” especially during the day. Like other political leaders, he is known to eschew sleep and often works late into the evening.

Mahathir reportedly attempts to get seven hours of sleep per night, but argues “prolonged sleep will weaken the body” and credits less sleep with physical strength that leads to stronger muscles and bones.

“What goes for the muscles of the body also goes for the brain. If the brain is not used, it too will lose its functions,” he maintains.

“To prevent deterioration of the brain, be active, talk, read and write, solve problems, argue and debate. People who do these things will retain much of the functions of the brain even as they age,” said Mahathir, who explained that his recommendations are based on his personal experience rather than scientific studies.

Keeping up with the news is also a way to improve mental fortitude, he says.

“Reading newspapers every day also helps to keep the mind active and improves the capacity to form words and phrases. It is normal for an old person to remember incidents in the past than recent incidents. But even this can be improved with reading and talking.”

Not incidentally, Malaysia’s position in the Reporters Without Borders’ World Press Freedom Index has risen an impressive 22 places since his Pakatan Harapan (PH) coalition came to power in May 2018, ranking 123 out of 180 countries for media freedom, the highest score of any Association of Southeast Asian Nations (ASEAN) member state.

“Writing forces you to use your brain all the time. You want what you write to be readable. So you are forced to talk, think, argue, debate and quarrel with yourself as you put pen to paper.”

Though Mahathir re-entered the political fray in 2017, his first foray into opposition politics was arguably his experience as a blogger.

In 2008, he began positing in English and Malay on his blog, “Chedet”, named after the pseudonym he used when he penned newspaper articles as a university medical student in Singapore in the late 1940s and 50s.

Prior to rejoining government, he wrote stinging critiques of his successors Abdullah Ahmad Badawi and Najib Razak.

He has continued to blog since taking office, though less prolifically, weighing in on national controversies and addressing criticism of his government. His “Chedet” website has over 30 million views and counting.

Apart from strictly refraining from smoking and consuming alcoholic beverages as a religious obligation, Southeast Asia’s wiliest political operator advocates correct posture: “At all times stand upright like a military officer.” The deliberate straightening of the spinal column, he says, mitigates the progressive hunching of one’s back with old age.

In November, Mahathir suffered a slight nose bleed during a press conference. His office squashed rumors that he was rushed for medical attention and said he continued his normal duties once the nose bleed subsided.

“Tun (Mahathir) said not to worry, [his] blood pressure is good (at) 120/70,” Malaysia’s finance minister tweeted after the incident.

With his 95th birthday on the horizon in 2020, he insists “many things are within our control and we should do our best to control ourselves so that we stay healthy and probably live to a ripe old age.”