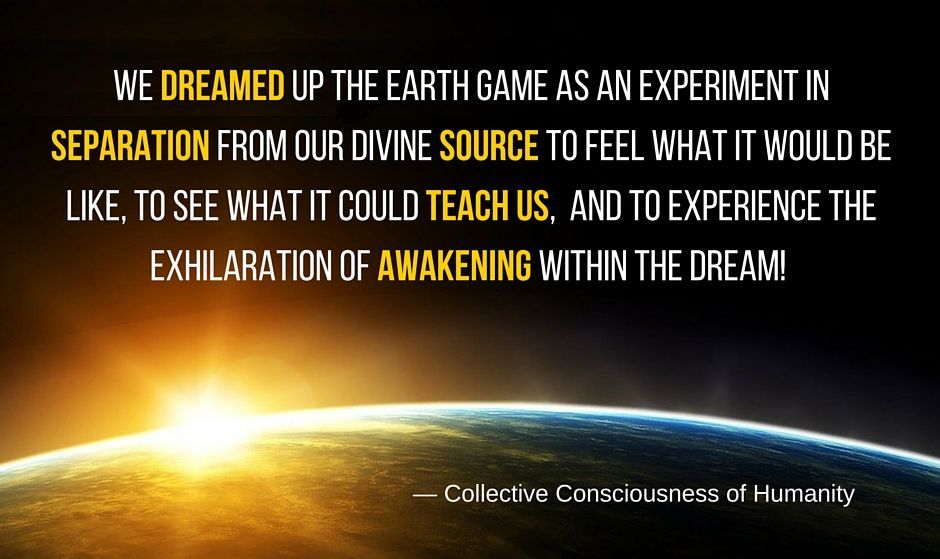 Jeff Street – Understanding the origin, purpose, and true nature of the earthly reality that you are experiencing can be instrumental to transcending your current level of consciousness and moving up to the next level of the game.  For some, especially the unawakened, this information might be a bit overwhelming or hard to believe but it could prove to be very important to the future course of your life both, during this one and the next.

As with all realities created within the One great cosmic mind, and there are multitudes, our earthly reality is simply a mental construct.  There are many individual parts/aspects of the One who have chosen to put their focal point of awareness within this construct — to dive into, and play the Earth game.  And they all chose to do this for the same fundamental reason — because it provides extremely interesting and formative experiences that drive the evolution of consciousness.  And this is the point of all realities because the foundational stuff of existence IS CONSCIOUSNESS.

YOU are one of these aspects of the One that is playing the Earth game right NOW.  Whether you know it or not, your true essence IS, and ALWAYS has been, a thread of the universal consciousness.  And you, and the higher levels of you, on behalf of the One, have been exploring the nature of yourself and existence by creating a multitude of realities and playing a multitude of roles (lives) within those realities.

In most of the multitude of realities that we created and played within we knew, to varying degrees, what we were — creator beings that are integral parts of the One creator being — Source consciousness, prime creator, God, or whatever else you like to call it.

But within this great diversity of realities, there were none in which we completely forgot what we were — and this possibility intrigued us immensely.  What would that be like?  And what could it teach us?  It certainly seemed like it might be very interesting, to say the least.

So in our eternal quest to know ourselves “we” (e.g., higher levels of ourselves) set out to create this new type of reality — one where we would completely lose our connection to our divine source, forget that we are creators of our reality, and forget that we are all one.  A reality where we would think we were separate from the creator and each other — a reality that could aptly be called “The Separation Game.”

Even though the separation game isn’t limited to Earth, I’m focusing on its manifestation on Earth for two reasons; (1) For the obvious reason that everyone reading this article is currently immersed in this game right here on Earth — I doubt many ET’s are following my blog, and (2) The state of the game on Earth is fast approaching a great transition point which should be of great interest to all the participants — it certainly is to a wide array of non-physical beings as well as ET’s that are observing and even assisting.

PLAYERS WITHIN THE GAME

Some of you may object to my characterization of our earthly reality and lives as “a game.”  And that’s because you have forgotten the real you, and become deeply immersed in the illusory drama.

The term “game” is actually quite appropriate — just as both kids and adults choose to play games for fun, entertainment, and to learn so do our souls choose to play within the earthly reality construct.

In fact, our experience of the earthly reality works in a way very similar to how our computer games work. In a computer game, you are the player and your consciousness controls an avatar within the game world.  You perceive, experience, act and react within the game world as your avatar — the character you are playing. But because you can’t completely forget that the “real you” is outside the game, you never get completely lost in the game and think that it is “real” — you know that it’s an illusion.

In a very similar way,  your soul is the consciousness that is directing your avatar (your body)  within the earth game world.  The big difference is the earth game was designed is such a way that we would forget that we are souls playing within an illusory world.  And so we get deeply lost within it and begin to believe that it is “real” and that there is nothing else.  And our souls willingly CHOOSE to play the earth game just as people willingly choose to play computer games.

DESIGNING AND CREATING THE SEPARATION GAME

It was not at all obvious how to create a reality where we would feel completely separate from our source and each other and forget we are creators.  We experimented with many designs before hitting on something that worked.  The key elements that allowed the objective to be achieved were the “veil of forgetting”, the role of “the adversary”, our limited physical senses that perceived the world as discreet and separate objects, the substantial delay between our thoughts and their manifestation into reality, and the very strong contrast between the polarities present.

Within this context an interesting and powerful psychic structure emerges fairly quickly after incarnation — the ego.  Its emergence is a natural consequence of the highly dualistic nature of the reality that our consciousness finds itself in, as well as the other constraints and elements mentioned.  The perception of separation of self and others; The perception of duality; us vs them, good vs bad, have vs have not, etc; and perception of limitation rapidly leads to a devolving of consciousness that self creates an ever deepening and strengthening illusion of separation — and so the separation game is sustained.

Within the genre of Duality/Separation Consciousness, there are some very interesting and powerful dynamics that I will explore deeply in future articles, follow the blog to stay tuned.

Here’s a passage from a highly recommended book that talks about how the illusion of the Earth game is co-created.

YOUR SOULS ARE PARTS OF THE ONENESS THAT HAVE AGREED TO CO-CREATE THIS ILLUSION OF SEPARATION WHICH IS CALLED DUALITY. SOME SOULS ARE HELPING TO CREATE THE ILLUSION WITHOUT COMPLETELY IMMERSING THEMSELVES IN IT. HIGHER-DIMENSIONAL BEINGS SUCH AS THOSE OFTEN CALLED ANGELS ARE AN EXAMPLE OF THIS. SOME SOULS ARE HELPING TO CREATE THE ILLUSION BY DIRECTLY IMMERSING SMALL PORTIONS OF THEMSELVES IN THE ILLUSION. YOUR HIGHER-SELF IS ONE SUCH AND YOU ARE THE PORTION OF YOUR HIGHER-SELF THAT IS COMPLETELY IMMERSED IN THE ILLUSION.

THE STATE OF THE GAME

We have played out many versions and iterations of the earth game, and many of them ended very unproductively — in disaster, destruction, meltdown, apocalypse, you name it.  The game we created is very challenging indeed.

From one perspective it hardly matters if the game ends in a meltdown because it is completely an illusory experience.  If it crashes, we can simply restart the game from the beginning.  And even though we do learn something from every experience, however challenging or disastrous, apocalyptic outcomes like these are certainly not optimal learning experiences for the evolution of our consciousness.

This iteration of the Earth game has been underway for some time now and as usual, all the souls that are part of humanity are engaged in a very difficult, challenging and confusing game.  As is normal for realities of this type we have descended into a level of consciousness that might be best described as “Victim” consciousness and the victim/perpetrator/rescuer dynamic that characterizes this level of consciousness has been dominating the human drama for quite some time.

Also some of us have strongly polarized into one of two modes of this genre of consciousness — Service to Self or Service to Others (more detail about all of this in future articles).  The net effect of all this is that we have manifested a reality characterized by greed, competition, conflict, domination, subjugation, and the persistent struggle for freedom.  This is the current state of the Human drama and, as with all realities, it is a reflection of our state of consciousness.

This iteration of the game would likely follow a very similar course as all the others if it were not for one thing.  We had experienced enough sub-optimal scenarios and decided to introduce a stimulus, from outside the game, to steer it to a much more rewarding and productive conclusion.

To achieve this we planned a subtle and multi-faceted series of interventions whose goal was to awaken as many players as possible to the wider reality and their higher selves and to spur them to ascend to higher levels of consciousness and thereby to the next level of the game.  The details of these stimuluses are quite interesting, but beyond the scope of this article — stay tuned, becuase I may write about this in the future.

I like to call this benevolent intervention, “Operation Uplift Humanity” and it is being orchestrated by many higher levels of ourselves and has been in progress for some time now.  The good news is that the stimulus has reached critical mass and we are entering a period of rapid and great change — a period of great transformation in ourselves and our world.

Yet only those souls that can awaken within the game and attain higher levels of consciousness will “graduate” to the next level — a new and transformed version of Earth.  All others will essentially have to take the same “class” over again — e.g., play the same level of the game again but somewhere else.  This is by no means a punishment; all souls simply go to experiences appropriate to their level of progression.

Another thing that makes this iteration of the Earth game so unique and exciting is that we are attempting to jump from the deepest levels of Duality consciousness directly to Unity consciousness.  The process of evolving from Duality to Unity Consciousness has played out on many worlds, but it is typically a gradual process that unfolds over a long period and many generations.  Ours is the first planetary civilization in which we are attempting to do this process within one generation.  This has never been done before and our planet and this space/time nexus is the test case.  If it succeeds, we may use this as the standard approach to all spiritual evolution at this level!

In upcoming articles, I’m going to explore more details about the dynamics of the separation game.  This will include a fairly deep look at the states of consciousness and ways of being that emerge within strongly dualistic realities like our Earth reality and how they evolve. Understanding the dynamic and evolution of consciousness within the Earth game, and where you stand within it, is both eye-opening and potentially transformative, follow the blog to stay tuned.

One for all, and all for one!

14 thoughts on “THE ORIGIN, PURPOSE, AND DESTINY OF THE EARTH GAME”