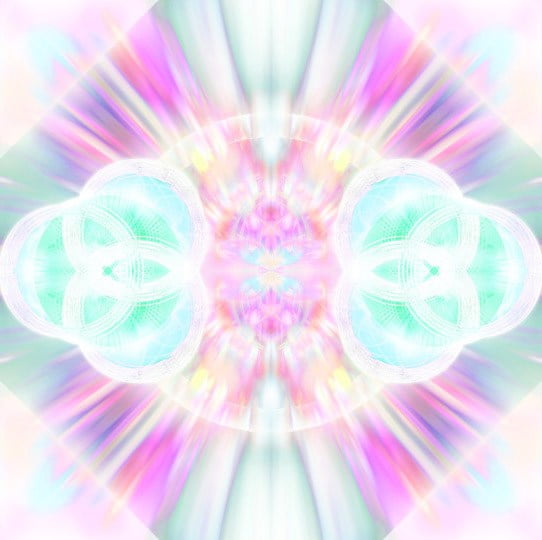 Our planet has been enduring sequences of bifurcation between the timelines that create points of divergence and frequency splitting within the lower dimensions. As the frequency split in that spectrum of that particular dimension widens, it amplifies the polarities in the spectrum of the frequencies that exist in that space and this catalyzes a variety of energies and entities to move forward into either of the opposing directions. This event can also be defined as a type of entity transiting, where people and lower spirits, both incarnate and disincarnate, must be moved out of that particular space time location and shifted into another one. Certain space time locations or dimensions in the planetary body are undergoing frequency split and thus, are rolling up into higher frequency dimensions and routing frequency groups into systems of collective consciousness. This shift creates moving energetic streams that run into many smaller tributaries that feed into rivers, that then move to converge into larger bodies of water, like a lake or the ocean. Energy current moves similarly as to how water moves, depending on its viscosity and wave length. The planetary shifting impacts how energetic tributaries move in the ley lines of the earth body, and where these energies coalesce into larger energetic bodies, like pooling energies into vortices or Stargates. The horizontal network of energetic tributaries are moving vast streams of consciousness energy out of the lower dimensions into median timelines. This lower frequency area is being extracted and is where many of the black force shadow forms and fallen entities reside. This shift in the field catalyzes and forces these entities to move around into different patterns, entering new grid networks, and even attaching to human bodies that are traveling on the same timelines. This shift in the lower dimensional ley lines is impacting our physical body functioning dramatically, the human light body is upgrading and changing. This is also shifting around the location of many types of forces that are interacting in unusual ways with the planetary body, and this generates strange anomalies.

Many of us can witness this energetic movement happening in the environment and see the chaos it generates as well as how it impacts the people around us. Some people are floating comfortably in the energetic flow that is moving them upstream through following the multiple synchronicities that show up, while others are sinking and flailing about feeling lost and confused, as they are being carried downstream. We can observe both energetic realities happening simultaneously. The descending reality is where people have not dealt with their trauma fears, phobias or destructive habits and do not understand the ascending process of consciousness evolution and have not discovered the main lessons of their required learning. Some are getting worse as they wrestle with their inner demons and addictions, lashing out in pain or withdrawing into depression. The lower dimensions surface the main areas of separation trauma that impacted the collective mind of humanity on the earth. These are the memories recorded in the unconscious mind of the people and the earth body itself. If the person has not delved into some inner emotional work to gain some clarity about the contents of their unconscious mind, the main areas of unconscious trauma become amplied into triggers in the surface of their ego-personality.

Mainly, this is the processing of previous timelines of abuse, trauma, shock and devastation from the point in time of our original separation with the God Source, and the subsequent splitting of our gender principle. The male and female principle were originally unified, and through the cataclysms and wars that occurred in our hidden history, the internal genders were split apart and lost to each other. This resulted in tremendous suffering and pain in our heart and soul layers, ultimately creating consciousness distortions such as the sexual misery programming. This means a lot of people on the earth are processing sensations of shock and trauma from the time of the split (fall of humankind), and are unaware of the source causation of why they are grieving or feeling so lost. When we are confused about the source of our inner pain, we usually blame it on something that is on the surface or we blame someone else that we perceive as hurting us. After the blaming phase, people tend to bury their inner pain, self medicate and escape their feelings with an addiction of some kind.

The ascending reality is where we may observe the overview of the world of forces that are impacting us, sensing the cross spiral collisions happening in the energy field. At the same time, we can sense the unconditional love of the higher spiritual forces that are carrying us forward into a higher and more benevolent timeline. The new timeline is moving us away from the impact of these lower demons and their destructive forces of chaos, such as the Behemoth and Leviathan. The gridworkers are called to witness these fallen forces as they surface into our view from the underworld, or from the depths of the lower dimensions. Many of us are acting as transition teams, holding compassionate witnessing,  to move out these entities from the AI timeline, phantom or dead areas, and they are both human and non-human entities.  This is sad for us when we can feel the pain existing in the lower dimension of the earth, and we are forced to observe and may feel we are leaving certain people behind.  This emotional processing has required a completion cycle of the old timelines, through clearing out ancestral miasma, cord cutting, and disconnection from certain people or things that are stuck in the miasma of the lower fields or moving onto a different path.

In some cases, we have been pushed to make these hidden fallen forces more transparent to others, by witnessing the reveal of unethical behavior and/or covert agendas that may surface within organizations, communities or other types of groups. This is a period of time in which some organizations, that have been built upon unethical or inhumane standards, are being given their Come to Jesus moment. They have a choice to see their actions and choices clearly that need correction, to then apply unconditional love and forgiveness, while they step down from positions of authority and power over others. Those structures that have been built upon a house of cards, ego drives, deceptions and weak moral character, are being revealed in smaller organizations and group situations, creating a ripple effect of witnessing by others in the macrocosm field.  The upgrade in the lower dimensional ley lines impact the red wave spectrum of survival and poverty consciousness, of which the victim-victimizer mind control program is wielded by Archons who use the Controller archetype, the False King of Tyranny to manipulate dark forces within people. Many of us can see the False King of Tyranny operating in people that are power or fame hungry and that they enjoy having authority over other people. These are Controller types of people. Controller type of people are becoming extremely obvious to the spiritually initiated, we can see the dark force manipulation of the Controller archetype existing in all types of people, the Soccer mom, CEO, middle management boss, beauty queen, policeman, ambitious young college graduate, teachers, professionals, pastors,  all walks of life.

Once you can identify the Controller archetype and the energetic signature of the Fallen Angelic or demonic force behind the negative behaviors, it is very easy to feel it, see it and sense it operating in the person who is only identified with the surface of the material reality. It is important to discern the forces operating behind the person, and to not judge it with less than or assign higher value, but to see it as it is and not what you would prefer it to be. We must find the spiritual maturity and strength to call out dark forces where they reside, while unconditionally loving the people that may be involved, as we apply forgiveness to their dark ignorance, when they seem hell bent to create destruction or chaos in the environment. This profile of person is devoid of love, and ultimately should not be given positions of power or authority over others. Until we recognize fully a Controller type person from their low frequency vibration, and we refuse to allow that kind of person to continue to carry out power abuses and steal resources from others, we cannot change the imbalances of power. Controllers will always reveal their true nature through personality defects and unethical behavior at some point over time. We must pay attention to these unethical or harmful behaviors and assess them accurately, yet without casting judgment of that person. The more power or influence a person or group has over people or that they have full access to use the larger resources that belong to the earth, the more responsibility they have in the ethical treatment of others and to which they are held accountable.  Until we take money and profit out of the primary motivation used to reward people’s hidden desires for materialism, this needed shift towards valuing human beings and virtue-ethics in this society will not happen.

Through the current shifts, many of us are being called to leadership in ways we are reluctant.  Many Star people and Indigos are not fame oriented or power hungry people, and prefer to live anonymously and behind the scenes. As certain organizations are being blown apart by revelations of unethical actions, others are being pushed to rise to help guide and support others who may be devastated from these continual streams of stark realizations. It is a spiritual imperative, if you are fully committed in service and employed by your highest self and/or God, that you do not abuse your spiritual power or take your sphere of influence in the world for granted. This is the call to apply loving kindness no matter what the situation, and to treat all people, no matter what they did, no matter if you do not like them, to commit to treat all people with respect, dignity and humanity.

Unconditional love is known as love without any limitations, it can also be love without conditions. This term is associated with other terms such as true altruism, or complete love. Altruism or selflessness is the principle or practice of concern for the welfare of others. It is a traditional virtue in many cultures and a core aspect of the Law of One practices. Altruism or selflessness is the opposite of selfishness, and the earth needs the virtue of selflessness, more than ever.

Many of us came to this earth to be the example in order to bring the Unconditional Love of the Eternal Light of God to shine brightly into this world. Certain people are awakening now to lead by this example and to live in the light and to help show the way for others. For we are made in the eternal living light of the Cosmic Christ!