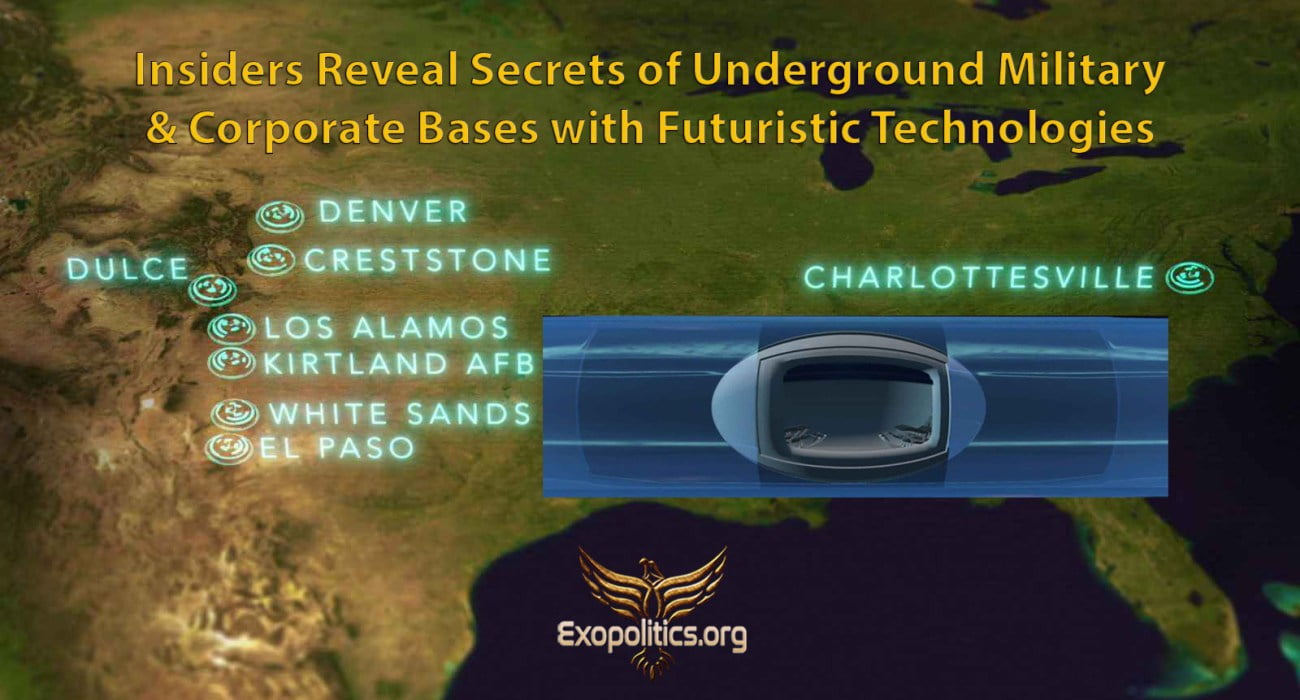 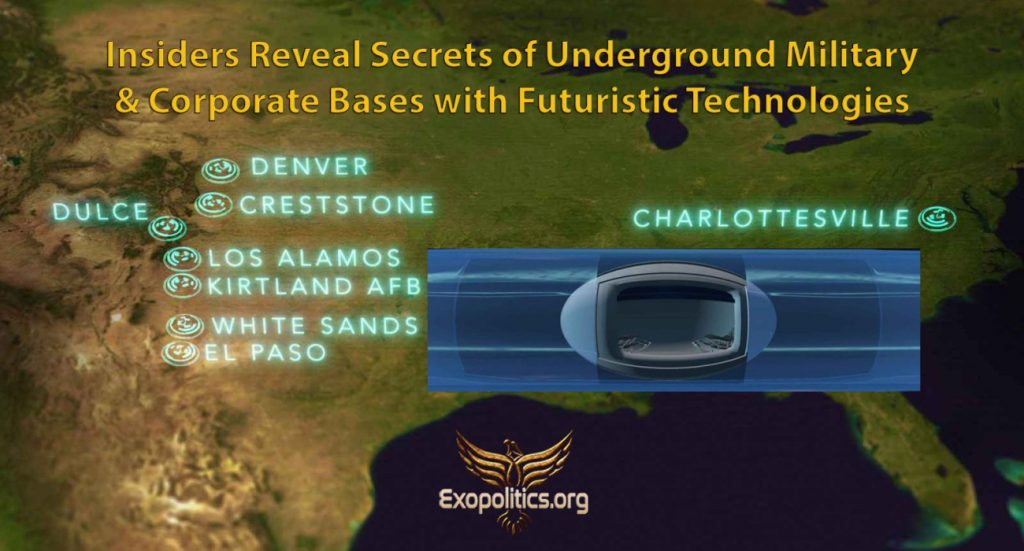 The May 22 episode of Cosmic Disclosure featured a bombshell interview of two insiders, Emery Smith and Corey Goode, who discussed their direct knowledge of classified underground bases and the super advanced technologies used there. They revealed the security protocols, policy oversight, and travel and cloaking technologies secretly used at the bases.

Goode is best known for his first hand experiences inside multiple secret space programs, and also contacts with different extraterrestrial and Inner Earth groups that he began publicly disclosing in late 2014. He says that much of his knowledge of these underground military/corporate bases came through reading briefing documents found in smart glass pads he had access to during his “20 and back” programs, as well as direct personal experience during his covert service.

Goode’s testimony in secret space programs has been extensively covered by David Wilcock in the Cosmic Disclosure series and his book, The Ascension Mysterious; and also in my Secret Space Programs book trilogy. Both Wilcock and I have identified hundreds of sources and documents that corroborate many of Goode’s claims.

Smith publicly emerged as an insider/whistleblower in December 2017 to share his direct experiences in multiple classified programs that began with him being trained as a “Surgical First Assist” by the US Air Force at Kirtland Air Force Base. He has provided a number of documents on his website that substantiate his military training and work as a surgical assistant.

He has two patents granted in 2004 and 2011 featuring innovative medical devices. On his LinkedIn page he refers to two medical papers he has collaborated in writing. I personally spoke with the main author of the first paper written in 2006, Robert J. Mandle, Ph.D., who confirmed Smith’s involvement and his competence as a medical researcher.

Smith has given a number of interviews on Cosmic Disclosure and elsewhere where he has discussed his involvement in corporate/military experiments involving medical examination of approximately 3000 tissues samples from extraterrestrials, hybrids and other exotic life forms. He says that performed autopsies on approximate 250 extraterrestrial bodies at classified underground facilities at Kirtland Air Force Base, and and elsewhere.

In the May 22, Cosmic Disclosure interview, Smith and Goode compared their respective knowledge about security, locations and technologies used at the underground facilities. The interview has been made publicly available for free here. Goode also provides free transcripts of all his Cosmic Disclosure episodes which are available here.

What is remarkable for the listener, is how well Goode’s recollections of what he read in the smart glass pads, matches what Smith described directly experiencing when visiting these underground military/corporate facilities.

Highlights of their discussion was their common knowledge of how hundreds of secret bases in the US alone, while often on military installations, are actually controlled by corporations:

Now, when you say government, I want to, like, talk about that, because it’s not always the government that owns these facilities.

They GUARD these facilities – the military does – but they don’t always . . . are in control of the facilities, because they are owned by larger corporations and unknown organizations.

Corey: That have different oversight.

Smith and Goode’s claims here have enormous significance since it reveals how the U.S. military may be kept out of the loop of what is happening on many classified projects which are run on military installations by corporations.

This brings to mind an incident from 1997 involving Rear Admiral Tom Wilson, who was briefed on a classified UFO related project by Dr. Steven Greer and Dr. Edgar Mitchell (Apollo 14 astronaut), but was denied access by corporate attorneys. What made the incident quite remarkable was that Admiral Wilson at the time was the J-2, head of Intelligence for the Joint Chiefs of Staff.

Smith and Goode further discussed how the hundreds of bases in the US, others around the planet and even off planet are connected via a highly developed maglev rail system:

Corey: … Some of the bases are . . . you cannot access them from the ground whatsoever. You have to go through the tram system, the secret tram system underground.

Corey: And the only entrance and exit is through that tram system…. And often, they will be very deep, as I’ve said before. At a certain depth, you’re no longer considered in United States territory…. And so you then have free rein.

Emery: Absolutely, yeah…. And I was getting to that, because once you get down there, you have to take the tram.

And many of them have different types of maglev and lavatube devices to get you there…. And you can actually wear a seat belt in these things, but you don’t need to. You don’t even know you’re going because it’s so fluid, and it gets up to such a high speed.

And I don’t know how fast that is, but I heard some of these can go over 500 miles per hour.

Corey: Because you could be in another country for all you know.

Emery: Right. Or another planet.

Corey: Right. Exactly. I was actually talking about that recently, about how . . . Recently, when I was brought up to the Lunar Operation Command, I was brought into a room for a briefing, and there was a window.

And I looked out the window, and I saw Mars.

Corey: And I was told that a lot of times, people will take these trams. And much like I took a tram, and it ended up on another planet . . .

Illustration of a travel pod in the underground rail system. Source: Gaia.com

Both Smith and Goode have provided a lot of additional details about the capabilities of the secret underground shuttle system that was first exposed in 1995 by Phil Schneider in a series of interviews that culminated in his murder/suicide months later in January 1996, and in a book authored by Dr. Richard Sauder, Underground Bases and Tunnels: What is the Government Trying to Hide (1995).

Additionally, Wilcock pointed out some of the others that have come forward since Schneider and Sauder’s ground breaking revelations:

Let me also just say for the record that Bob Dean, Pete Peterson, Jacob and Henry Deacon have all reported on this phenomenon of sub-shuttle systems where you get transported somewhere else, and you don’t even realize it. You’re just riding in the thing, and you go somewhere else.

Wilcock asked Smith and Goode what they knew about the metallic element Thorium in relation to underground bases:

Corey: Well, I know that in the programs, the craft, research vessel, I was assigned to, originally it was nuclear. And then they replaced it with a thorium based.

And then they replaced it with some sort of an electromagnetic engine that had these long tubes that they would put something in that they called “minnow baskets” that would spin.

And if you move it up and down, you get a little bit of play in the electromagnetics.

Corey: And I think it’s some sort of electromagnetic friction that’s going around. And these leads are picking up the energy and shooting it wirelessly through the tubes, which then go directly to these huge capacitors.

Emery: Right. Yeah, a lot of capacitors are used in these bases to hold the energy.

I’m not an expert at thorium, but I was recently on a project where a private organization – a private corporation – hired me to . . . They sent out people all over the United States – a scientific team – to find the LARGEST deposit of thorium here in the United States.

And I know exactly where that’s at. And that is also in New Mexico. I’m not going to tell you the city it’s located near, but I’ll tell you it’s in New Mexico.

And there’s an unlimited amount of thorium there that could power all the planets, and all the bases, and, of course, us right here indefinitely – INDEFINITELY – I mean with the amount of energy we already currently use.

Smith and Goode are revealing that Thorium is used in a cold fusion process that provides a virtually unlimited power supply for covert projects and spacecraft.

Smith and Goode go on to discuss the latest hologram technology, and how incredibly advanced it has become to the extent that holograms can physically appear to be hard and even have mass:

Corey: Yeah, lots of that technology – the masking technology with holograms.

Emery: Lots of it.

Corey: They’ve even developed holograms to a point to where they have mass.

Emery: You can cast a shadow.

Corey: Yeah, you can do a hologram, and you can walk up and “tink, tink, tink,” like a piece of glass.

Or even they can make it even thicker in depth….

Emery: Yeah, I totally can attest to that as well, and I was part of . . . not part of that, but there was compartmentalized projects near me during that that were working on satellites that could do that, or they were putting that technology in satellites in the early ’90s, and I think it was probably before that.

Corey: Yeah. What’s crazy is they’ll have a hard light panel. They remove the source of the power or electricity, and it stays.

Smith’s and Goode’s corroboration of their respective experiences and knowledge of technologies used at underground bases is highly significant, given extensive documentation possessed by Smith validating his core claim of having been a trained surgical assistant that participated in covert autopsies of dead extraterrestrials conducted at Kirtland Air Force base and other classified locations.

The conclusion emerging from their first joint “Cosmic Summit” interview is that Smith’s experiences and documentation corroborate key elements of things Goode has been saying since late 2014. This is important supporting evidence for those still undecided about the veracity of Goode’s incredible claims.

Smith and Goode will be appearing together in future Cosmic Disclosure episodes, and will again compare their experiences and knowledge about highly classified programs. This upcoming series of “Cosmic Summit” interviews is essential viewing for all seeking the truth about secret space programs.